Pregnancy is supposed to be filled with joy, but for this Charlotte woman, it is hell 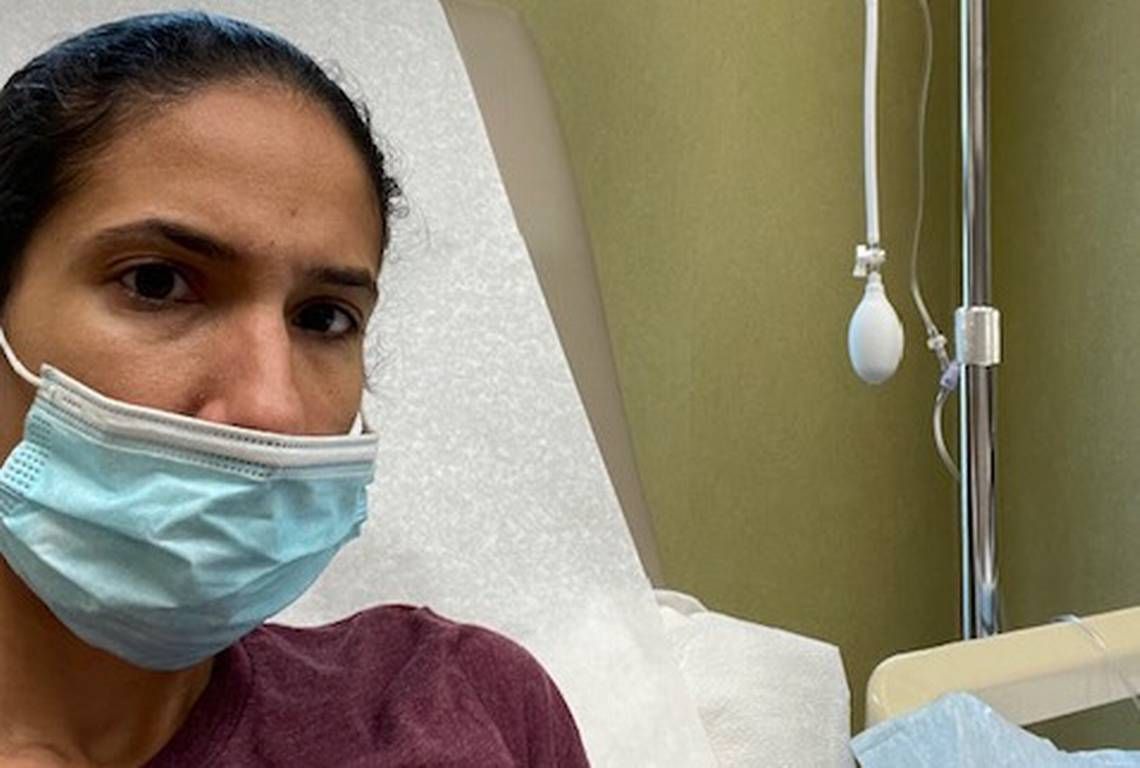 Baby showers, gender reveals, bump pictures — pregnancy is typically a time of joyful celebrations. But for Charlotte area resident Siobhan Havlik, 37, there hasn’t been a lot to celebrate. She hasn’t been upstairs in her house in months. She has not bathed or put her two daughters, 7 and 5, to bed. She hasn’t even been able to brush her own hair.

Eighteen weeks pregnant and suffering from hyperemesis gravidarum for the third time, Havlik said, “It’s not that you forget after the first pregnancy but it’s more like I did it one time, I can do it again.” But for the less than 2% of women who suffer from hyperemesis gravidarum — extreme, persistent nausea and vomiting during pregnancy that can lead to dehydration, weight loss, electrolyte imbalances, hospitalization and even death — it is nothing short of a living hell.

HG is a rare disorder, but for those whom it affects, it is life altering. “I have gone days without eating or drinking anything at all. Water is a trigger — it’s actually the worst liquid. Motion is a trigger, someone touching me is a trigger, food is a trigger. I literally sit on the couch all day for months, and that is how I spend my pregnancy,” Havlik said. “Some women have it even worse and will vomit 50-60 times per day.”

Comedian Amy Schumer and the Dutchess Kate Middleton have been vocal about their struggles with hyperemesis during their pregnancies. In her documentary, ”Expecting Amy,” Schumer talks about vomiting blood and eventually having to cancel her tour due to her battle with hyperemesis.

Many ob-gyns see only a handful of hyperemesis patients each year and may not understand the seriousness of the condition. Dr. Marlena Fejzo, Ph.D., a geneticist who researches hyperemesis at the University of California, Los Angeles and University of Southern California, and who has suffered from the condition herself, recommended to the New York Times that women recruit a spouse or friend to be their advocate during doctor visits. “When you get so weak and you’re so nauseous, a lot of times you can’t really advocate for yourself,” Fejzo said. A list of experienced hyperemesis doctors can be found on the HER Foundation website.

Havlik was a teacher at the start of her first pregnancy, before hyperemesis forced her to quit. From the start of her pregnancy she was vomiting every 30 minutes and trying to hide it. “I just thought, this is what pregnancy is. I can’t complain. No one doesn’t work just because they are pregnant.”

Substantial weight loss and a lot of self advocacy eventually led to Havlik being diagnosed with hyperemesis and getting on a Zofran pump to help manage the nausea. In addition to the severe symptoms suffered during pregnancy by the mother, the condition can also lead to increased risks of preterm birth, low birth weight and small gestational size. Because there is no specific test to identify hyperemesis gravidarum and an overall lack of awareness and information, even with her third pregnancy, Havlik has had to fight to be treated.

“I was so sick and dehydrated early on that I had to go to the emergency room. I knew I was risking COVID exposure and my immune system was shot, but I was desperate. My husband was not allowed in with me due to COVID procedures, and the staff was so overwhelmed that no one could help me. I was literally sitting there crying from starvation,” Havlik said.

“There is such little awareness around hyperemesis, and a lot of medical professionals are dismissive. They think it is made up. I’ve had a nurse tell me that if I just try to eat I won’t vomit, as if I’m causing this, I’m making this up.”

According to the HER Foundation, 82.2% of women reported negative psychosocial changes from hyperemesis , including socioeconomic changes, job loss, fear of future pregnancies, depression and anxiety. Women who reported that their health-care provider was uncaring or unaware of the severity of their symptoms were nearly twice as likely to report these psychiatric consequences.

“There are a lot of women who terminate their pregnancy because they have to be able to work or they don’t have help,” Havlik said. “I am lucky to have the support of my husband and family and friends. My husband bears the brunt of this because he is working and paying the bills and being a caretaker to me and to the girls. Our marriage suffers after each birth. We have to work to rebuild what is lost.”

The emotional, mental and psychological effects are something that many women suffering from hyperemesis struggle with. “You feel so far removed from normalcy,” Havlik said. “No one really knows how to support you. You can’t leave your house, you can’t enjoy meals.

“The best thing I can recommend to people wanting to help someone who suffers from hyperemesis is to just be mindful and research. Go to the HER Foundation site. There is a great documentary on Amazon called Sick: The Battle Against HG. This condition is very real, and it is extremely isolating.”

A marathon runner who regularly works out six days a week, the lack of a physical and mental outlet during her pregnancies has been hard on Havlik, but her training has also given her strength. “Marathon training has helped from a mental strength perspective. I’m stubborn. If I want something bad enough, then I tough it out. Just like with a marathon, the training is hard. You think, “Why am I doing this?” But when you finish and feel that accomplishment you’re ready to do it again.”

Despite the immense sacrifice and suffering, Havlik is grateful. “There are no cute bump pictures, and I’ve had times where I don’t want to be pregnant, but I’m so grateful I can get pregnant and I can carry babies full-term. I want this baby so much, and I can’t wait to meet him or her,” Havlik said.