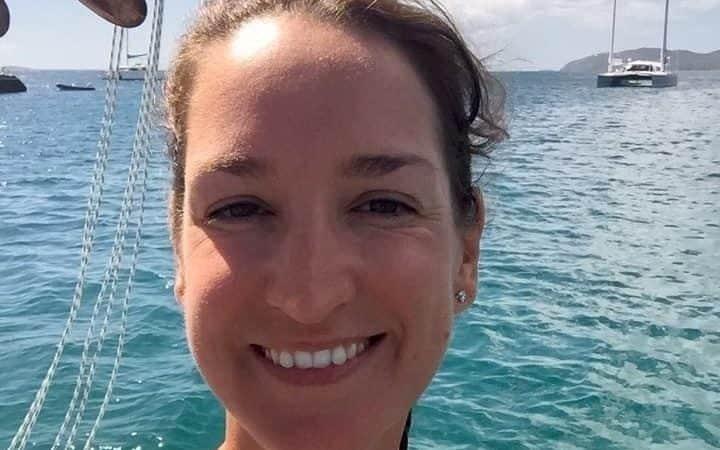 Sarm Heslop is described as a slim 41-year-old woman, 5″7 tall, with a southern English accent and a tattoo on her left shoulder

A huge search and rescue operation has been mounted for a British woman who vanished without trace from a yacht moored off the US Virgin Islands.

Sarm Heslop’s boyfriend raised the alarm after waking in the early hours of Monday to discover she was nowhere to be seen on his 47ft catamaran Siren Song.

Police and divers searching for Ms Heslop, from Southampton, have been scouring the coastline and waters around the island of St John, where the yacht was moored.

A friend of the missing 41-year-old said: “We have heard that Sarm’s phone, passport and all belongings were left on the boat, where she was living with her boyfriend.

“She would not just disappear, leaving no trace. We are asking for an urgent and thorough investigation into this incident as her friends here at home are devastated and just need her disappearance to be made a critical priority.”

The friend said she was told that Ms Heslop’s belongings, including her phone and passport, had all been left behind on the yacht.

Speaking from the UK she added: “We would like to thank all the local community for their support in searching for Sarm both on water and land.

“They have been so amazing but we urge them not to give up until she is found or we have more information.”

The US Coast Guard told local media that it was alerted to Ms Heslop’s disappearance at 11.46am on Monday when her boyfriend said she was nowhere to be found.

He called the coast guard’s San Juan station to report that “his girlfriend may have fallen from their 47ft catamaran, the Siren Song, the night before”.

The boyfriend is understood to have told the coast guard that Ms Heslop had gone to sleep at around 10pm, and that he woke “at 2am he woke up and realised that she was not on board”.

The Virgin Islands Police Department has urged members of the local community to help find the missing Briton, who had been living on the Leopard 4700 catamaran.

Ms Heslop is described as a slim 41-year-old woman, 5″7 tall, with a southern English accent and a tattoo on her left shoulder.

Toby Derima, Virgin Islands police spokesman, said: “Heslop was last seen on March 7 aboard the vessel Siren Song, that was moored off the coast of St John. Divers from various law enforcement agencies have searched hundreds of square feet of water.”

Mr Derima said that volunteers from the Virgin Islands have also scoured the area around Cruz Bay during daylight hours, but added: “’Unfortunately, this effort proved unsuccessful.”

One source in St John, one of the largest of the US Virgin Islands, said locals were very concerned about her welfare.

The source said: “An English woman has gone missing on our island and we are appealing for help in trying to locate her.

“’Every day that goes by and we don’t have any news about her is a major concern for us. We need to locate her as soon as possible.”

A Facebook page, MissingSarmHeslop, has been set up to help trace Sarm and anyone with information that could help the investigation is urged to contact the Virgin Islands Police Department.