Australians rally at Parliament to demand justice for women 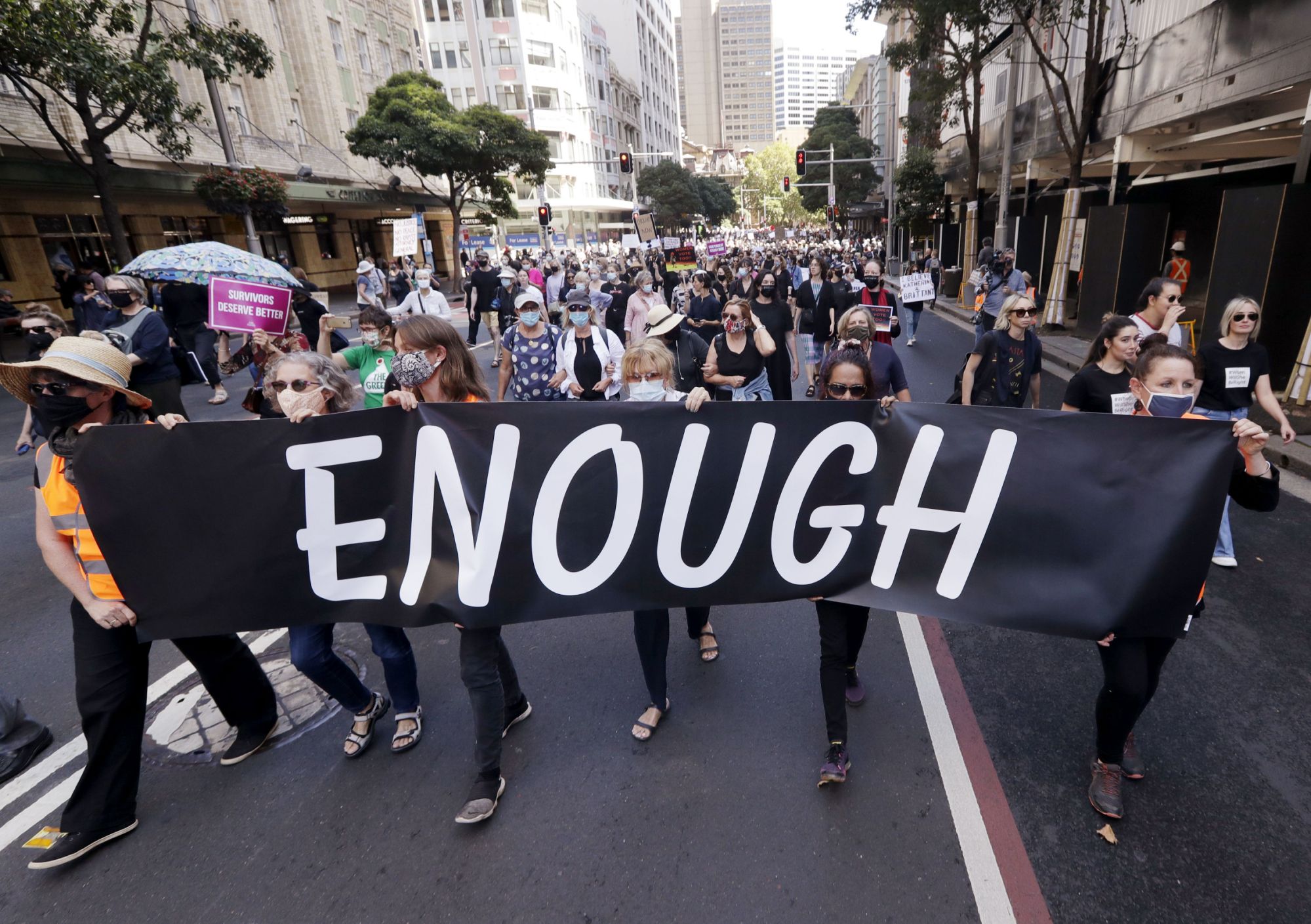 CANBERRA, Australia (AP) — Australians rallied in the capital and other cities Monday demanding justice for women and calling out misogyny and dangerous workplace cultures as the government reels from two rape allegations.

Outside Parliament House in Canberra, the crowd of hundreds was mostly female and most wore black. They carried placards including “Justice for Women” and “Men, Own Your Guilt.”

Prime Minster Scott Morrison refused organizers’ demand that he address the crowd and they would not meet him in his office.

“We have already come to the front door, now it’s up to the government to cross the threshold and come to us,” organizer Janine Hendry said.

“We will not be meeting behind closed doors,” she added.

Morrison later told Parliament that he shared the protesters’ frustration and concern. “This is not to suggest that good faith and genuine efforts are not being made whether by this government or the many governments that have proceeded us. Those efforts are being made. But the outcomes still elude us,” he said.

Morrison is standing by his Attorney-General Christian Porter over an allegation that he raped a 16-year-old girl when he was aged 17 in 1988. Porter denied the allegation. His accuser took her own life last year after withdrawing a complaint to police.

Separately, Defense Minister Linda Reynolds has been criticized for failing to adequately support a young staffer who alleged she was raped by a more senior colleague in the minister’s office in Parliament House in 2019.

Brittany Higgins said she felt she had to make a choice between reporting her allegations to police or continuing her career. She quit her government job in January and reported her allegation to police.

“I was raped inside Parliament House by a colleague, and for so long it felt like the people around me only cared because of where it happened or what it might mean for them,” a tearful Higgins told the Canberra crowd.

“It was so confusing because these people were my idols. I had dedicated my life to them. They were my social network, my colleagues, and my family. And suddenly they treated me differently. I wasn’t a person who had gone through a life-changing, traumatic event. I was a political problem,” she added.

The Associated Press does not usually identify alleged victims of sexual assault, but Higgins has chosen to identify herself in the media.

The protests, which also took place in Sydney, Melbourne, Brisbane and Hobart, coincide with the first sitting of Parliament since the allegation against Porter became public in early March.

Reynolds has since apologized for describing Higgins to her staff as a “lying cow” and said she was referring to Higgins’ allegation of inadequate support, not the rape allegation. The minister also agreed to pay Higgins an undisclosed sum as compensation.

Porter’s lawyers announced on Monday that he is suing Australian Broadcasting Corp. for defamation over a news article that he said made false allegations against him. ABC said in a statement it will be defending the action.

“Although he was not named, the article made allegations against a senior Cabinet minister and the attorney-general was easily identifiable to many of Australians as the subject of the allegations,” the lawyers said in a statement.

Opposition lawmakers called on Morrison to establish and independent inquiry into the allegations against Porter.

But Morrison said the defamation case was the correct forum to examine the allegations.

“The arguments will be made, the evidence will be presented. And that matter can be rightly addressed through our courts where it should be and that is the approach which I think best addresses the matter,” Morrison said.

Porters has been on mental health leave since March 3 when he held a news conference denying that he had raped the girl, who has not been named.

Reynolds has also been on sick leave with a heart condition since Higgins made her allegations.