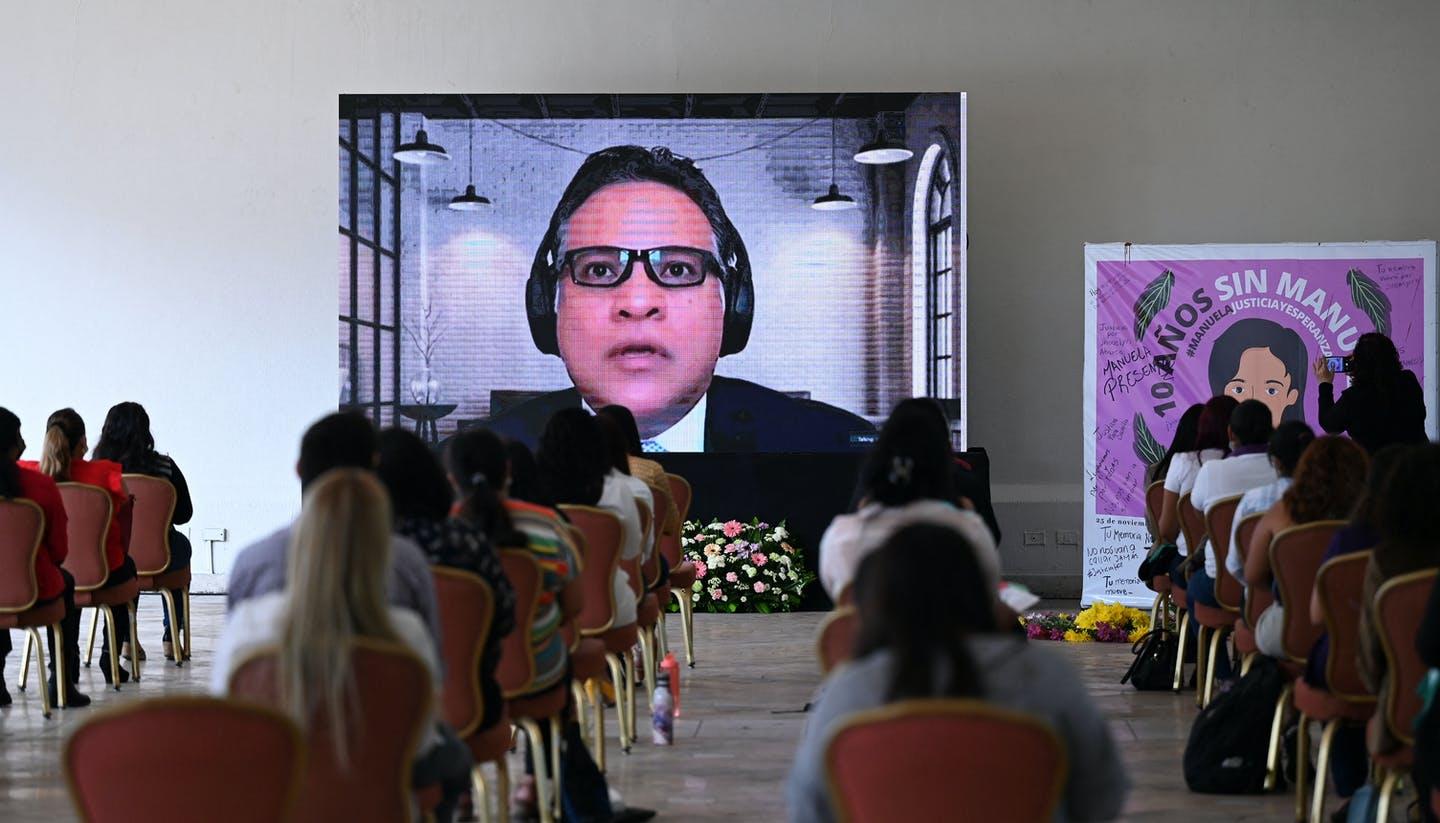 El Salvador outlaws abortion completely, even in circumstances of rape or incest, with penalties ranging from two to 50 years. The abortion ban is so broadly enforced that even women who suffer miscarriages and stillbirths can be prosecuted for murder.

Now an international court will decide for the first time whether these laws violate the human rights of Salvadoran women.

On March 10 and 11, the Inter-American Court of Human Rights – a regional tribunal of the Organization of American States created to adjudicate alleged human rights violations in member countries – heard arguments in Manuela and Family v. El Salvador, regarding a 33-year-old mother of two who suffered a stillbirth following a fall at her home in rural El Salvador in 2008.

Manuela – whose real name is not used to protect her family’s identity – was rushed to the hospital after losing consciousness and hemorrhaging.

Though she said she was unaware of her pregnancy, hospital personnel accused Manuela of intentionally inducing an abortion and called the police. She was handcuffed to her hospital bed, interrogated by both physicians and police, and charged with aggravated homicide. In 2008, Manuela was convicted and sentenced to 30 years in prison.

Later that year, lawyers for her family started the legal process that eventually ended up in the courtroom this month. The claim: that criminal prosecution of a stillbirth is a human rights violation.

El Salvador is one of three countries in Central America and 24 worldwide with a total abortion ban. Obtaining an abortion is a crime, and obstetric emergencies resulting in miscarriage or stillbirth are regularly charged as aggravated homicide.

Medical professionals involved in performing an abortion may face six to 12 years in prison and can be barred from practicing medicine. Family members who “support a woman” in getting an abortion can be punished with two to five years’ imprisonment.

Research from across Latin America and the world shows that abortion bans do not stop women from terminating unwanted or life-threatening pregnancies. Rather, they cause women to seek illegal, possibly dangerous abortions, and can lead hospitals to deny patients lifesaving reproductive health care.

Such laws also lead women to be prosecuted for both reproductive decisions and health emergencies.

Woman in a purple T-shirt sits on a swing, smiling with arms crossed

A few years ago, we examined two such cases in El Salvador: the prosecutions of Evelyn Hernandez and “Diana,” both charged with aggravated homicide on the basis of apparent stillbirths. Our expert analysis, conducted at the request of the Clooney Foundation for Justice, found extensive human rights violations in both cases, including discrimination on the basis of gender, violations of the right to health and improperly shifting the burden of proof to the defendant women.

El Salvador guarantees all these rights in binding international treaties. We found that authorities violated them in prosecuting both Hernandez and Diana.

Based on these findings, we filed a “friend of the court” brief in Manuela’s case, which is strikingly similar to the cases we studied. We advised the Inter-American Court to order El Salvador to vacate the judgment against Manuela and to reform its criminal law to comply with the American Convention on Human Rights.

At the March 10 hearing in Manuela and Family v. El Salvador, held virtually because of COVID-19, Manuela’s attorneys asserted that their client’s prosecution violated numerous rights protected under Salvadoran and international law.

Prosecution for a stillbirth constituted gender-based discrimination, denied Manuela her right to health and violated the right to a life of dignity and integrity, her lawyers argued. The government also denied her the right to due process of law, the right to protection from inhumane treatment and the right to privacy, the attorneys asserted.

If the court’s seven judges rule in Manuela’s favor, they can order El Salvador to vacate her wrongful conviction and reform its penal code.

That could mean decriminalizing abortion, at least in extenuating circumstances such as rape or incest, as several Latin American countries have done in recent years. Reform could also aim to stop the stream of wrongful convictions for aggravated homicide against woman who suffer an obstetric emergency.

The court’s ruling is likely to be handed down in the coming months.

Power of the court

While the Inter-American Court has limited power to enforce its judgments, El Salvador is legally obligated to comply with its rulings and has done so in the past, including obeying orders tackling its punitive reproductive health laws.

In 2013, the court ordered El Salvador to preserve the life and health of “Beatriz,” a woman who suffered from lupus and kidney disease and sought an abortion because she was pregnant with a nonviable fetus.

The Salvadoran Supreme Court had rejected Beatriz’s request to terminate her pregnancy to save her own life. But when the Inter-American Court disagreed, ruling that Beatriz’s right to life required the state to act, El Salvador complied. On June 3, 2013, “Beatriz” got a lifesaving cesarean.

El Salvador’s current president, Nayib Bukele, stated in a 2018 presidential debate that he is in favor of legalizing abortion when pregnancy threatens the life of the mother and said he was “completely against” criminalizing women who have miscarriages.

“If a poor woman has a miscarriage, she’s immediately suspected of having had an abortion,” he said. “We can’t assume guilt when what a woman needs is immediate assistance.”

[Over 100,000 readers rely on The Conversation’s newsletter to understand the world. Sign up today.]

His administration has done nothing to prevent convictions for miscarriages or ease the abortion ban, despite pressure from feminists and human rights groups. But Bukele is unlikely to snub an Inter-American Court ruling.

Whatever the judgment in Manuela’s case, it will come too late for the plaintiff and her family: Manuela died of cancer in prison in 2010. If her conviction is vacated, as requested, it would be justice done posthumously.

The authors do not work for, consult, own shares in or receive funding from any company or organization that would benefit from this article, and have disclosed no relevant affiliations beyond their academic appointment.