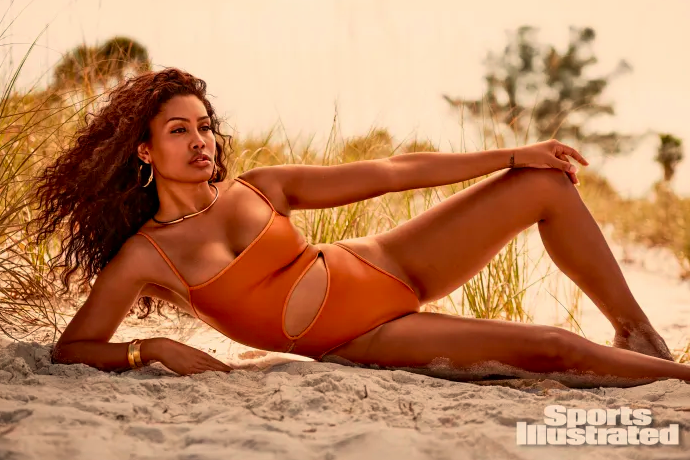 Model Leyna Bloom this week became the first transgender woman of color to grace the pages of the “Sports Illustrated” Swimsuit Issue.

Bloom, who grew up on the South Side of Chicago, follows in the footsteps of Valentina Sampaio, who last year became the first transgender model to appear in the Swimsuit Issue. Bloom is the latest rookie to join the magazine’s ranks.

“This is what it looks like to be in full bloom,” the model, actress, dancer and activist wrote on Instagram, along with a photo of herself from the issue. “My spirit has reached new levels. This moment is bigger than my wildest infinite dreams. In this moment, I am a representation of all the communities I grew from, and all the communities I’m planting seeds in.”

“Before my feet even touched the sand, you all wanted to celebrate the temple of my body and the deepest part of my spiritual universe,” she added, thanking the Sports Illustrated team. “Your kindness has given me so much hope in the humanity of entertainment industry. I thank you for that.”

Bloom, who is Black and Filipino, has been making headlines for years. In 2017, she became one of the first openly transgender models on the runway at New York Fashion Week, as well as the first transgender woman of color in “Vogue” India.

According to “Sports Illustrated,” two years later Bloom was the only openly transgender model to walk the runway at Paris Fashion Week. She recently appeared in a Levi’s campaign that also featured Naomi Osaka, Jaden and Willow Smith and several other activists.

“Leyna is legendary in the world of activism, strikingly gorgeous and has an undeniable sense of self that shines through the minute she walks on set,” said MJ Day, editor-in-chief of “Sports Illustrated” Swimsuit, which has been revealing its rookies all month long. “Her presence as the first trans woman of color to be in our issue is a result of her lifetime dedication to forging her own path that has led to acceptance, love and change. She represents every person’s right to love themselves and be who they want to be.”

Bloom also made her acting debut in “Port Authority,” which premiered at the 2019 Cannes Film Festival — reportedly the first film in festival history with a transgender woman of color as the lead. She’s been a prominent LGBTQ activist for years.

“The idea that Sports Illustrated Swimsuit has chosen me to be a part of this huge moment tells me that I deserve to be cherished and what I represent as a woman should never be taken for granted, regardless of my unique circumstances,” Bloom said in a post on the magazine’s Instagram. “I feel so lucky to be apart of something that is rooted in change and acceptance.”