Asian woman, 76, turns tables on attacker, sends him to hospital 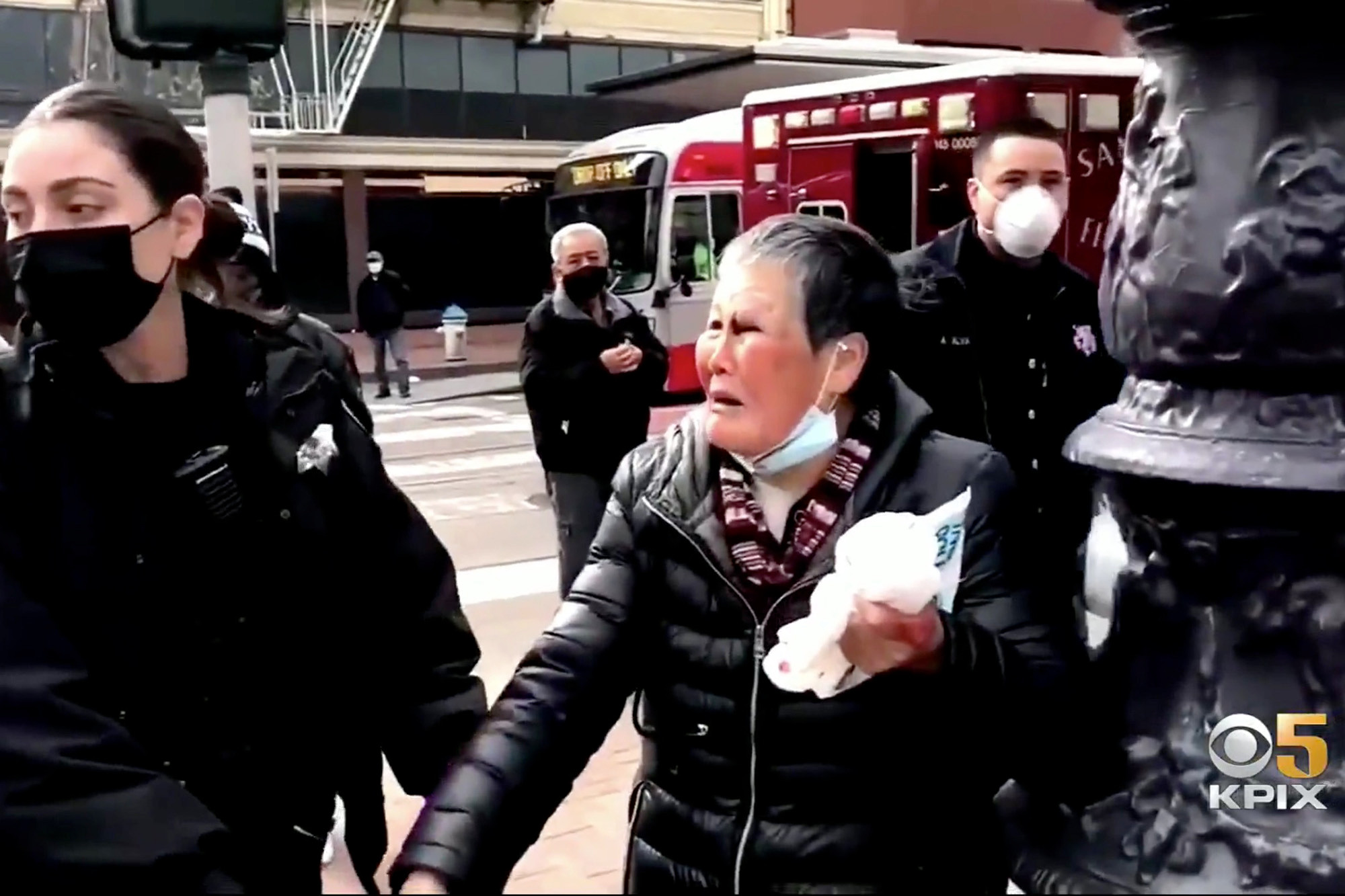 A 76-year-old Asian woman was attacked in San Francisco – but the feisty retiree turned the tables on her much younger assailant by fighting back, leaving him bloodied before yelling, “You bum!”

Xiao Zhen Xie became the latest victim in a surge of attacks on Asians in the Bay Area when the man, who appeared to be in his 30s, punched her in the face with no provocation as she stood on a sidewalk Wednesday, KPIX 5 reported.

Video posted on Twitter by the station’s sports director Dennis O’Donnell shows the battered woman holding an ice pack to her black eye and wielding a stick she apparently used against the goon, who is handcuffed to a stretcher.

The spunky woman discussed her ordeal from her senior retirement home in San Francisco, with her daughter Dong-Mei Li interpreting.

“Very traumatized, very scared and this eye is still bleeding,” Li told KPIX 5. “The right eye still cannot see anything and still bleeding and we have something to absorb the bleeding.”

Xie, who has lived in the City for 26 years, said her immediate instinct was to fight back when she was attacked while waiting at a traffic light at Market Street and Charles J. Brenham Place at around 10:30 a.m.

The spunky woman discussed her ordeal from her senior retirement home in San Francisco.KPIX 5

“She found the stick around the area and fought back,” Li said, adding that her mom still can’t see out of her left eye and has not managed to eat after the senseless crime.

“As you can see she is extremely terrified,” Xie’s grandson John Chen told KPIX 5. “She’s terrified to even step out.”

O’Donnell, the KPIX 5 sports director, shot video of the chaotic scene when he walked by.

“There was a guy on a stretcher and a frustrated angry woman with a stick in her hand,” he said.

“You bum! Why did you hit me?” Xie yelled in Chinese to the man on the stretcher.

Xiao Zhen Xie is seen bloody at the scene where she fought off her attacker.KPIX 5

“This bum, he hit me,” she told the assembled crowd as she raised the stick she and sobbed. “He hit me — this bum!”

O’Donnnell said the woman appeared to want “more of the guy on the stretcher and the police were holding her back.”

Police did not disclose a motive for the aggravated assault and it was unclear whether the victim’s race had anything to do with the incident, which comes amid a spike in anti-Asian attacks in the US.

San Francisco police said an 83-year-old Asian man also was a victim on Wednesday morning and that an unidentified 39-year-old was being investigated for both attacks, KPIX 5 reported.

An elderly woman turned the tables on her assailant, leaving him with injuries that required a trip to the hospital.KPIX 5

Officials said they are working to determine if bias was a factor. Police did not specify if the man seen in the video was the suspect under investigation.

“We have to do our job and we have to investigate these cases with all resources brought to bear and we need to make arrests, and we’ve done that,” San Francisco Police Chief Bill Scott said in a press briefing.

Scott and Mayor London Breed also addressed other attacks in the city.

“We need to understand, not only what is going on, but why these attacks occur, because in some cases they didn’t include any robbery or theft,” Breed said.

According to a recent study from the Center of Hate and Extremism at California State University, in 16 of the largest cities in the US, hate crimes against Asian-Americans jumped nearly 150 percent in 2020 — even as hate crimes overall declined.

Xiao Zhen Xie became the latest victim in a surge of attacks on Asians in the Bay Area.GoFundMe

The group Stop AAPI Hate said that in the past year there have been nearly 4,000 hate incidents against Asians nationwide.

State Assemblyman David Chiu (D-San Francisco) said 1,600 of those attacks were in California, according to KPIX.