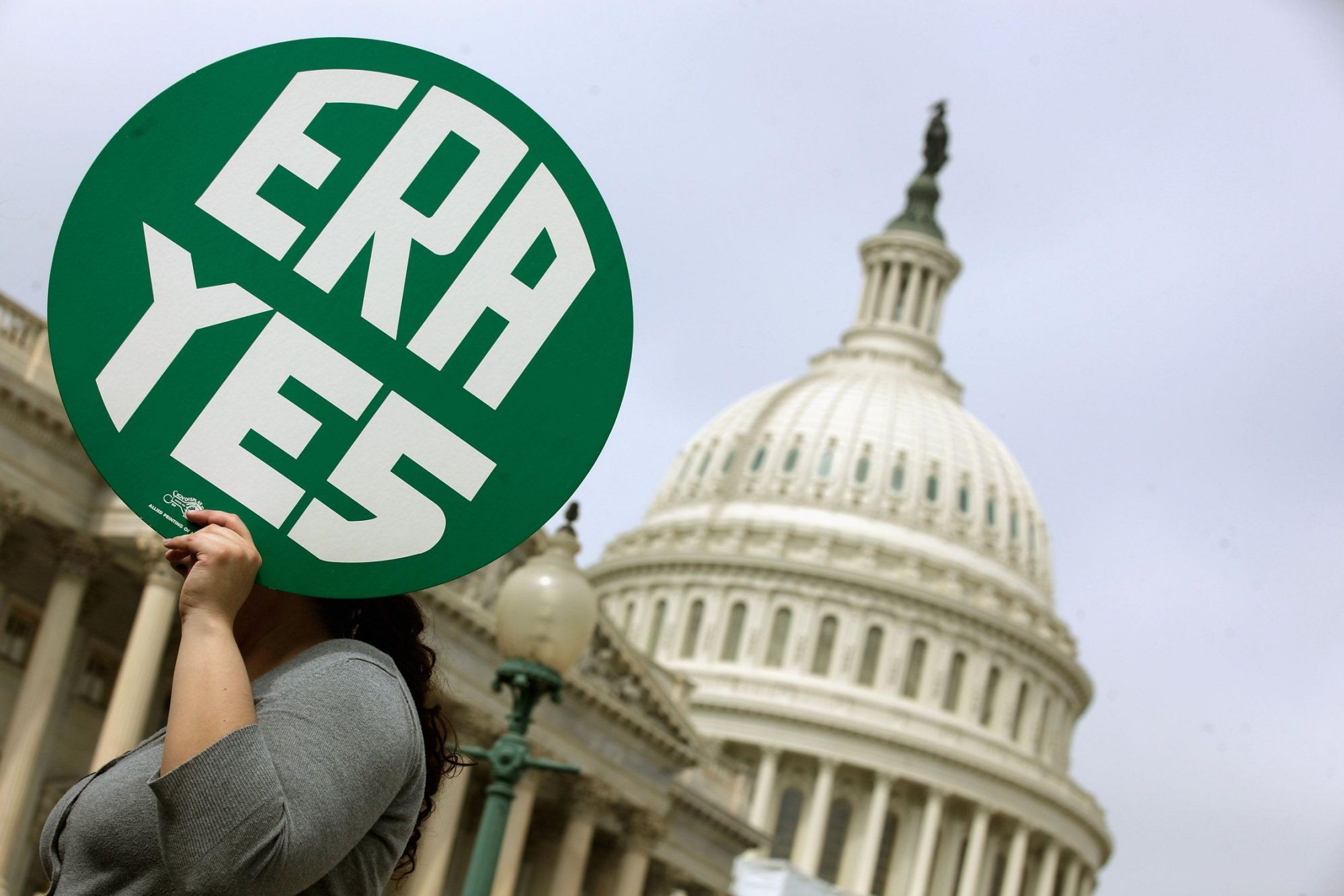 WASHINGTON – The House voted largely along party lines Wednesday to remove the expired deadline for ratifying the Equal Rights Amendment for women, despite the Justice Department’s view that such a move is not possible.

The resolution, which must also be approved by the Senate, says the amendment shall be part of the Constitution whenever it’s been ratified by the legislatures of three-fourths of the states. That happened last year.

But the 222 to 204 House vote came decades after the seven-year ratification deadline set by Congress as well as a three-year extension approved when the amendment was coming close to passage in the 1970s.

“With President Biden and Vice President Harris at the helm, this will finally be the year we ratify the ERA to the Constitution,” said California Rep. Jackie Speier, co-chair of the Democratic Women’s Caucus and author of the resolution.

President Joe Biden has made equity a priority of his administration. Vice President Kamala Harris is the first woman to win a national election.

“Now is the time for us to recommit ourselves to tearing down the systemic barriers that continue to fuel gender disparities and limit opportunity for half of the American people,” Biden said in a statement after the vote.

Members of Congress and representatives of women’s groups hold a rally to mark the 40th anniversary of congressional passage of the Equal Rights Amendment on March 22, 2012.

But Biden has not removed a barrier to passage put up by his predecessor.

During the Trump administration, the Justice Department said Congress can’t revive the proposed amendment; it can only restart the ratification process.

“We conclude that Congress had the constitutional authority to impose a deadline on the ratification of the ERA and, because that deadline has expired, the ERA Resolution is no longer pending before the States,” the Justice Department’s Office of Legal Counsel wrote.

Asked if Biden will rescind that opinion, an administration official said Biden won’t dictate an outcome. The Justice Department did not respond to a request for comment. The White House did not issue a “statement of administration policy” on the ERA resolution as it did on another bill debated Wednesday that would revive a law aimed at reducing domestic and sexual violence.

Speier told USA TODAY on Wednesday she is confident the Justice Department’s 2020 opinion will be withdrawn.

“If you talk to any constitutional scholar, they said the opinion that was offered by the Justice Department last year was laughable, that it could not hold water in any real serious court of law,” she said. “That was a political statement.”

Only four House Republicans voted for the resolution, which no Democrats opposed.

The measure is supported by two GOP senators, Alaska’s Lisa Murkowski and Maine’s Susan Collins. But it doesn’t have enough Republican support to avoid a Senate filibuster.

“I wish that I could tell you that we had more Republican support for that at this point in time,” Murkowski said Tuesday. “We continue to work that.”

The Senate did not take it up after the House passed the resolution last year.

If adopted, the Constitution would state that “equality of rights under the law shall not be denied or abridged by the United States or by any state on account of sex.”

Supporters say it’s a long-needed protection for women who face discrimination in the workplace and struggle against domestic violence and sexual harassment.

Though many federal, state and local laws prohibit discrimination, those can be changed much more easily than a constitutional amendment. Courts treat sex discrimination cases inconsistently, advocates say.

“We have the right to demand that we be put in the Constitution,” Speier said. “We want in.”

Opponents argue it’s an unnecessary amendment that would enshrine in the Constitution protections for abortion, voiding any federal or state restrictions. Anti-abortion groups have pointed to court decisions in Connecticut and New Mexico that used state-approved equal rights amendments to allow “medically necessary” abortions for women on public assistance.

“Men and women are already equal under the Constitution. This legislation would make us no more equal,” Rep. Michelle Fischbach, R-Minn., said during floor debate. “It is merely a vehicle for the far-left, special interest groups to use to enact their pro-abortion agenda.”

Douglas D. Johnson, senior policy adviser for National Right to Life and director of its ERA Project, said the Constitution does not empower Congress to time travel back to 1972 to resuscitate a long-dead constitutional amendment.

Lawmakers are trying to do so, he said, because they know they can’t restart the ratification process without opening the amendment up to changes, including those that would be sought by abortion opponents.

Leading supporters of the Equal Rights Amendment march in Washington on Sunday, July 9, 1978, urging Congress to extend the time for ratification of the ERA.

Congress approved the ERA in 1972, including in it what the Congressional Research Service calls a “customary, but not constitutionally mandatory,” seven-year deadline for ratification by three-fourths of the states. When the number of states fell three short of the required 38 by 1977, Congress extended the deadline to 1982. No additional states acted by the new deadline.

Nevada became the 36th state to ratify the amendment that year, followed by Illinois in 2018.

Virginia approved it last year, the first time that a proposed constitutional amendment was adopted by the required number of states after a deadline under the premise that it could still be ratified.

Those states unsuccessfully argued in court that the deadline is not enforceable because the Constitution doesn’t give Congress the power to impose one. They also argued that while the deadline was included in the introductory clause to the amendment, it was not in the amendment’s text that states approved.

U.S. District Judge Rudolph Contreras, who was appointed to the federal bench by President Barack Obama, ruled against the states on March 5.

“The Court will not pull the rug out from under Congress’s long-accepted practice of declaring ratification conditions in a proposing resolution’s preamble based on a technicality,” Contreras wrote.

The states could appeal the decision.

The late Supreme Court Justice Ruth Bader Ginsburg, who was a longtime supporter of the ERA, said last year that she would like the process to “start over” because of the controversy over the late ratifications.

She also noted that some states that backed the ERA have since rescinded approval, raising another legal question. Five states – South Dakota, Nebraska, Tennessee, Idaho and Kentucky – voted to withdraw in the 1970s.

“If you count a latecomer on the plus side,” Ginsburg said during an appearance at Georgetown University Law Center, “how can you disregard states that said ‘We’ve changed our minds?'”

Students are returning to school with anxiety, grief and gaps in social skills – will there be enough school mental health resources?

Students are returning to school with anxiety, grief and gaps in social skills – will there be enough school mental health resources?