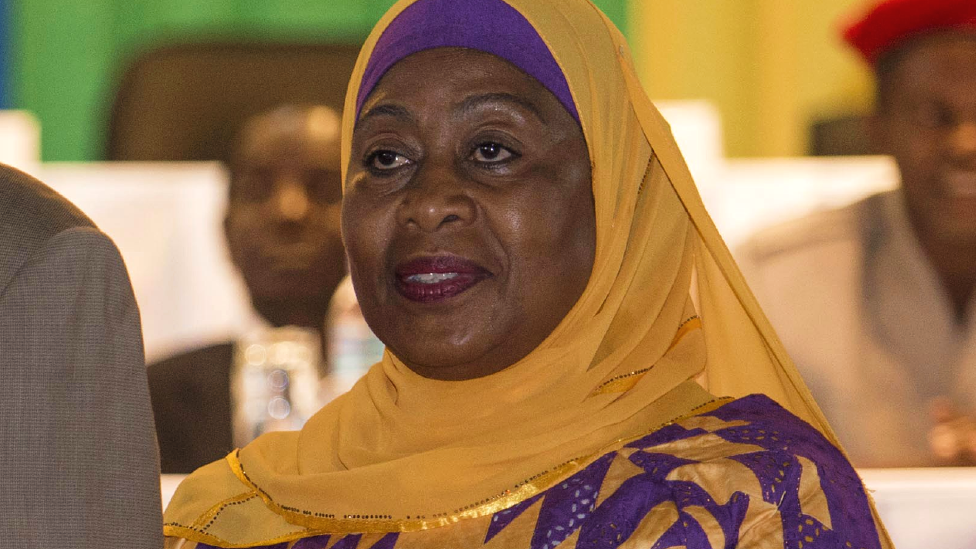 On Wednesday evening she had the task of announcing to Tanzanians that President John Magufuli had died and now Vice-President Samia Suluhu Hassan is due to take his place as the country’s head of state.

First elected as Magufuli’s running mate in 2015, she was re-elected last year along with him and according to the constitution, should serve out the rest of the five-year term in the top job.

She is set to become Africa’s only current female political head of government – the Ethiopian presidency is a largely ceremonial role – and join a short list of women on the continent who have made it to the top.

The 61-year-old is affectionately known as Mama Samia – in Tanzanian culture that reflects the respect she is held in, rather than reducing her to a gendered role.

But she was a surprise choice for a running mate in 2015, leaping over several other more prominent politicians in the Chama Cha Mapinduzi (CCM) party, which has been in power in one form or another since independence in 1961.

First elected to a public office in 2000, she came to national prominence in 2014 as the vice-chairperson of the Constituent Assembly, created to draft a new constitution. There her calm demeanour in managing occasional outbreaks of pandemonium and the way in which she dealt with some of the more outspoken members earned her plaudits.

In terms of personality she strikes a contrast with Magufuli.

Where he appeared impulsive, not afraid to speak off the cuff and let his feelings be known, she is more thoughtful and considered.

She is also said to be a good listener who believes in following the correct procedures.

One MP, January Makamba, who worked with her in the vice-president’s office, has called her “the most underrated politician in Tanzania”.

“I have observed at close quarters her work ethic, decision-making and temperament. She is a very capable leader,” he said.

But where this places her in terms of policy is not yet clear. Most significantly she has to decide whether to continue her predecessor’s sceptical approach to dealing with coronavirus.

There was no doubt that she was loyal to the president but she was not afraid to strike out on her own.

Perhaps the most significant evidence of that was in 2017 when she visited opposition leader Tundu Lissu in hospital in the Kenyan capital, Nairobi, after he had survived an assassination attempt.

With people speculating that state agents had been involved, the pictures of the visit sent shockwaves through the country.

Mr Lissu went into exile afterwards – returning briefly to take part in elections last year – but went back to live in Belgium, saying he had received more death threats.

Despite being vice-president since 2015, and having served as a state minister in the previous government, little is known about Ms Samia’s private life.

She was born in January 1960 on Zanzibar – the semi-autonomous islands off the coast of mainland Tanzania. Later she went on to study public administration, first in Tanzania and then as a post-graduate at UK’s Manchester University.

In 1978, she married Hafidh Ameir, who is known to be an agricultural academic but has also kept a low profile. Since Ms Samia became vice-president, the two have not been pictured together.

They have four children with one, Mwanu Hafidh Ameir, who is currently a member of Zanzibar House of Representatives.

2012 – Monique Ohsan-Bellepeau – Acting President of Mauritius, after the resignation of Sir Anerood Jugnauth