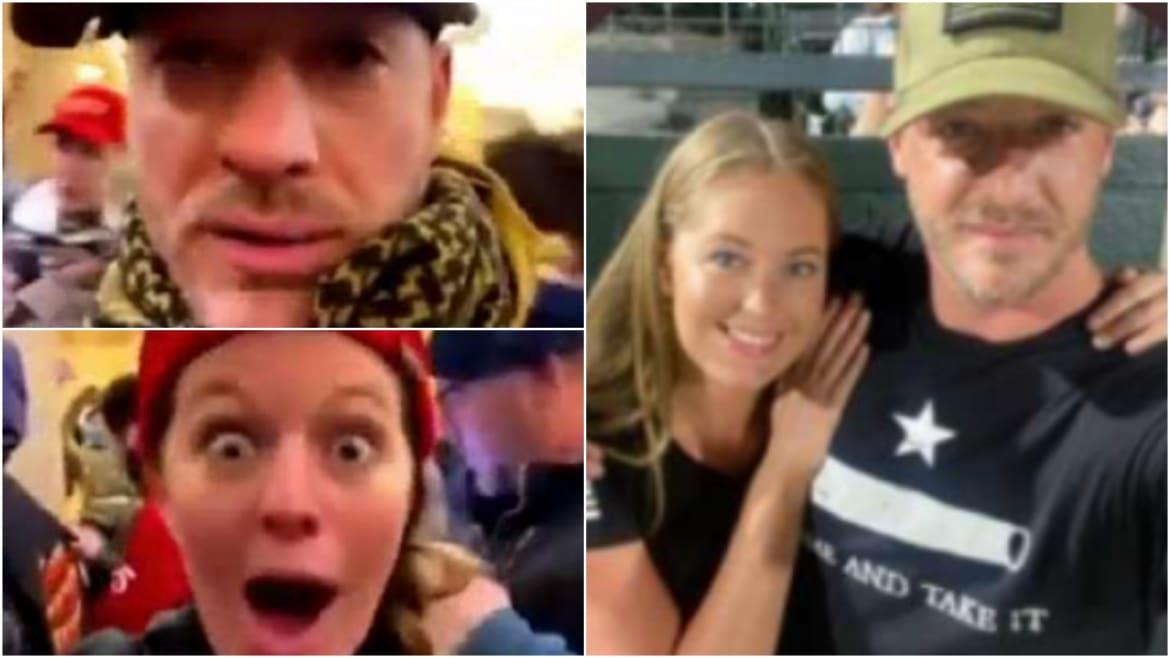 A Texas lifestyle coach and essential oils guru has been charged after storming the U.S. Capitol on Jan. 6 with her QAnon-obsessed boyfriend who documented “patriots [going] to war” on his social media.

Elizabeth Rose Williams, a Kerrville, Texas resident, and her boyfriend, Bradley Stuart Bennett, were arrested last week for violent entry and disorderly conduct and knowingly entering a restricted building. In a newly unsealed criminal complaint, prosecutors allege the pair were seen on video wandering around the Crypt and the Senate Chamber gallery as thousands of MAGA rioters stormed the Capitol.

“Storming the Capitol. Pray for us all,” Bennett wrote in a Facebook post provided to federal authorities by a tipster.

According to social media posts and her personal website, Williams is a lifestyle coach, a natural health enthusiast, “all American,” and a musician passionate about “living every day with purpose.” Her site says she started a “home-based business” at 18, and received “the equivalent of a degree from The School of Hard Knocks—if there even is such an accreditation.”

“From a very young age, Elizabeth has known that there is a big purpose for her existence on earth and that she is destined to do great things, and be an influencer to leaders,” her website “Life with Rose,” states, adding that she released her first album in 2018.

Her website states that, starting in 2008, Williams built a “network of health-minded families” and is a “seasoned educator in the area of essential oils, natural supplements, exercise, and conscious food sourcing” and an advocate of the “5 Key Elements of a Balanced Life.”

In her last blog post, dated the day before she was arrested, Williams provided her clients with several “spring cleaning tips” without being “too hard on yourself.” She also posted essential oil and lifestyle tips on her Instagram.

But while Williams seemed focused on internal healing, her boyfriend seemed focused on posting about QAnon. The complaint states that at least four tipsters who helped identity Bennett said he posted often about the conspiracy theory, which posits that Trump is working to bring down a cabal of violent, baby-eating Democrats.

One tipster, who didn’t personally know Bennett but had been “routinely” looking at his social media posts in the months leading up to Jan. 6, described the posts as “more combative” than others.

Prior to the riot, the complaint says, the tipster said he saw “Bennett make numerous posts encouraging people to gather and attend events in Washington, D.C.” and “posted that he would be present.” Two other people told authorities they saw Bennett post a video and a post when he entered the Capitol, including one that said “patriots [going] to war.”

“CAPITOL WAS STORMED. I DO BELIEVE A PATRIOT WAS SHOT. WE LOST A FEMALE,” Bennett wrote in one Facebook post, alongside a video where Williams is clearly seen. “There was Ant-ifa instigators. But I saw no severe violence. And certainly not from the right.”

“WE are safe and nursing one wounded warrior with us who took not one but two flashbangs to the leg and then face,” he added. “TODAY WAS A REVOLUTIONARY MESSAGE. WE WON’T GO AWAY. WE WILL FIND VICTORY.”

Another video provided to the FBI “appeared to have been copied from Bennett’s Facebook page and [showed] Bennett and Williams entering the U.S. Capitol, in the Capitol Crypt, and in the gallery of the Senate Chamber,” the complaint states.

“Bennett appeared to have deleted most or all of the posts he made about the [riot] within 24 hours of the event,” prosecutors added.

Williams and Bennett were released on bond.

I’m an Afghan woman with family in Kabul. The West’s lack of respect for the Afghan people is maddening.

'A lot of heartache': Woman who lost home in Tennessee flooding describes destruction