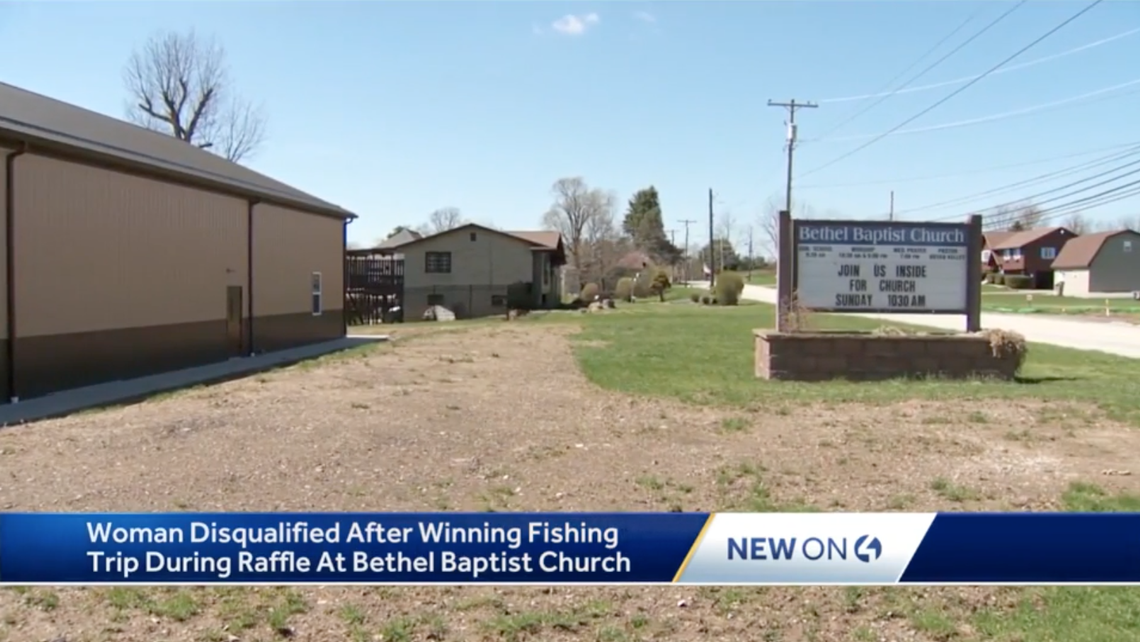 Emmy Smaniotto has been going to the wild game dinner at Bethel Baptist Church in Uniontown, Pennslyvania, with her dad for the last six or seven years.

“Up until last night, this was a great event to attend,” she wrote in a Facebook post.

But Smaniotto has soured on the event. That’s because she won a bow-fishing trip through a raffle — but said she was denied the prize because she’s not a man.

At the end of the Saturday dinner, attendees were invited to drop raffle tickets into buckets for a chance to win a variety of raffle prizes, Smaniotto wrote. One prize was a bow-fishing trip to Ohio.

“The guest pastor had mentioned that there would be guys-only fishing trips to take a chance on winning stating ‘make sure you leave those wives at home.’ Ok I thought — is this a joke or?” Smaniotto wrote.

She added her ticket to the bow-fishing bucket after seeing another woman do the same.

When it came time to draw the winners for the bow-fishing trip, the speaker drew the other woman’s name first, but immediately retracted her win, explaining that “this is a man’s only trip, sorry ladies,” Smaniotto said.

Smaniotto’s name was drawn second — but she was also declined the prize.

“What makes this a ‘guys only’ trip?” she wrote. “This is a church, everyone is created equal. I paid my $10 to attended just like every man, but don’t have the same privileges.”

In a statement to the Bethel Baptist Facebook page, Reverend Bryan Kelley explained that the church offered door prizes that were available to all in attendance, but that the fishing trip was donated by a third-party who stipulated it was for men only.

“Living in the days of sexual scandals and accusations many pastors, including myself, take the personal position that we will not put ourselves in a position that could bring about a false accusation and thus bring a multitude of problems, hence why he personally offered them for men only,” he said in the statement. “It was a matter of personal standards and protection and there was no intent of discrimination.”

Kelley said the speaker announced that the trip was only for men while the raffle tickets were being collected.

“Unfortunately, at least two ladies for whatever reason put their cards in that container although the stipulations were given twice and their names were drawn and declined because of the stipulations that were announced,” he said.

Kelley continued, saying he’d like to apologize to Smaniotto, but that he hasn’t had luck reaching her.

“I would like to sit and talk with them both to express a sincere apology and to assure her it was a lack of communication on our part to explain all the information more clearly and a lesson learned to think things through more clearly so we do not make the same mistake again,” the statement said.

He added that the person who donated the prize has also offered to take Smaniotto and her father fishing.

“I absolutely will not partake in any fishing trips with anyone from that church. I was denied once and don’t want a pity prize. I want equal rights,” she told WTAE.

“They’re implying that women will always accuse them of sexual scandals. If they were afraid of this, maybe they should have made it a rule that more than one woman has to attend the trip, to even the numbers so to speak, to prevent this, but they didn’t,” she added. “It was not even an option to discuss the trip details if a female would have won. I would do anything possible to attend a trip like this.”

McClatchy has reached out to Smaniotto and Bethel Baptist for further commented.

I’m an Afghan woman with family in Kabul. The West’s lack of respect for the Afghan people is maddening.