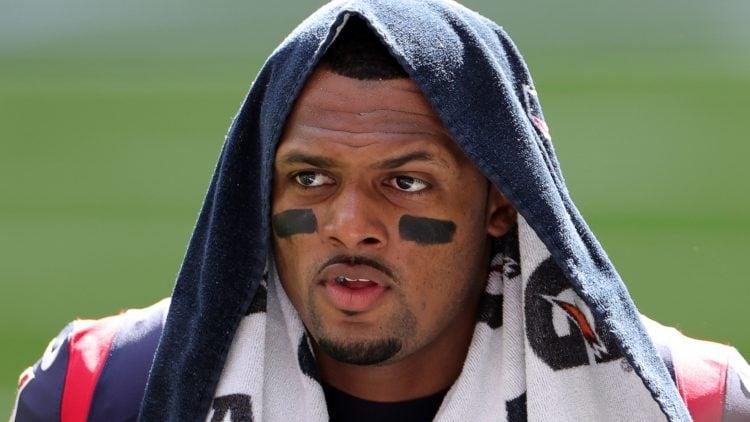 Three separate lawsuits were filed on Sunday accusing him of misconduct while getting massages. Per NBC News, 19 women in total have now come forward.

All of the women are named as “Jane Doe” in the lawsuit and are being represented by Houston lawyer Anthony Buzbee. Two of his accusers are Houston massage therapists while the another is a flight attendant training to become a massage therapist. They all advertised their services on Instagram.

But Watson’s attorney, Rusty Hardin, says his client never acted inappropriately with anyone.

“I believe that any allegation that Deshaun forced a woman to commit a sexual act is completely false,” said Hardin.

Houston Texans quarterback Deshaun Watson playing in a game in 2020.

One of the lawsuits alleges that the woman was asked to sign a non-disclosure agreement and was instructed to massage his groin. Watson allegedly told her “Don’t be scared.”

In another session, the same woman was instructed to hold her hand near his penis until he ejaculated.

In another case, a woman allegedly threatened to drop Watson as a client because he touched her and asked that she massage between his penis and testicles.

A message therapist who is not part of the lawsuit, spoke to Sports Illustrated on condition of anonymity telling the outlet that Watson was inappropriate with her as well.

“The one thing I keep thinking about is, he’s about to get traded to another place,” says the woman, who used the name Mary in the interview. “What if he goes to Atlanta or California or anywhere else? He would have a whole new community of massage therapists to target.”

She says the football player did not touch her or force her into conducting a sexual act, but says their 2.5 hour session was nothing she had experienced before and was inappropriate. The Houston massage therapist owns her practice and has given over 1000 massages to other clients and athletes.

Watson, she says, requested a towel instead of a sheet, which is typically used as a cover. After almost an hour into the massage she says he removed it and remained face-up on the table.

He asked that the massage be extended and that she focus on his inner thighs, stomach and quads. He also developed an erection and started thrusting in the air. The massage therapist says that male clients getting an erection is not uncommon because clients are usually very relaxed but that Waston’s next move was troubling.

“There was one point that he did tell me that I could move [his penis] if I needed to, and I just completely ignored him.” She adds he stayed on his back during the entire session and that she noticed “different fluids on his stomach.”

When the session was over and after Watson got dressed, Mary says he hugged her.

“I just want a genuine apology, for us and our community, for putting us in these situations where we don’t know what to do,” she says. “There are so many people that are against us, saying, ‘Why would he do that? He has no reason to do that. He has a beautiful girlfriend; he has this, this, this and this.’ All of those things are true, but fame doesn’t create character.”

She is now working with civil rights attorney, U.A. Lewis to explore her legal options.

As per theGrio, this is just the latest in the series of sexual misconduct allegations that have derailed the former Clemson standout’s career. Last September, Watson signed a contract for $156 M with the Texans, then demanded a trade, reports say, after he asked to be consulted on a new coach and GM hire. When the positions were filled without his input, Watson asked for a trade.

Watson now has over 13 accusers, according to multiple reports. The Georgia-born quarterback is facing allegations in 13 civil lawsuits that he hired several different masseuses and then sexually assaulted or acted inappropriately toward them in 2020 and as recently as earlier this month, per ESPN.com.

Houston attorney Tony Buzbee, the attorney representing what is now 13 accusers, began last week with several women who were filing civil lawsuits against the Texans player but has now escalated into a situation that may include criminal indictments. Buzbee says he is preparing evidence for the Houston police department and that there are ten more women that he is vetting.

“The case isn’t about money, and it certainly is not about seeking publicity or fame,” Buzbee said at a press conference. “I personally don’t need it, and these women don’t want it. This case is about female empowerment, taking the power back.”

The NFL has confirmed that they’ve opened an investigation into the quarterback to see if he’s violated the league’s personal conduct policy.

Watson first responded to the allegations on social media, saying that he’d been approached by Buzbee for a six-figure settlement that he’d rejected.

“As a result of a social media post by a publicity-seeking plaintiff’s lawyer, I recently became aware of a lawsuit that has apparently been filed against me,” Watson said on the post on March 18 once the initial allegations surfaced.

“I have not yet seen the complaint, but I know this: I have never treated any woman with anything other than the utmost respect. The plaintiff’s lawyer claims that this isn’t about money, but before filing suit he made a baseless six-figure settlement demand, which I quickly rejected. Unlike him, this isn’t about money for me — it’s about clearing my name, and I look forward to doing that.”

Have you subscribed to theGrio’s podcast “Dear Culture”? Download our newest episodes now!