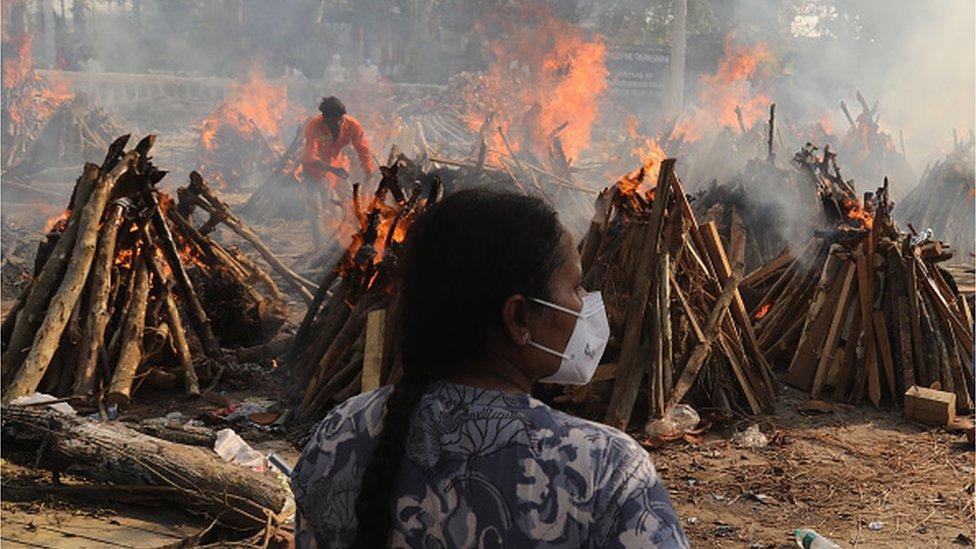 Indian actress and TV presenter Mandira Bedi recently hit the headlines for performing her husband’s last rights. Cremations are traditionally done by men, and women are often discouraged from even attending. But where does this belief come from and what do Hindu scriptures say about it?

With a clay pot containing holy water in one hand and holding up the bier – a bamboo frame – carrying the body of Raj Kaushal with another, Bedi wept as she did the rituals and lit his funeral pyre.

Kaushal, a 49-year-old filmmaker, died suddenly on 30 June from cardiac arrest in the western city of Mumbai.

The actress received messages of heartfelt condolences and won praise for what many described as standing up to patriarchy even while grieving.

Popular author and columnist Shobhaa De wrote that the image of “a grief-stricken Mandira doing her husband’s last rites challenged archaic norms governing our society for centuries and sent out a charged and powerful anti-patriarchy message”.

“When Bedi lit her husband’s pyre this week, unknowingly she also lit countless fires in the hearts of men and women who believe in themselves – and not in conventions that have held back our society for centuries. Those shackles instantly broke as the flames from the pyre touched the sky,” Ms De wrote.

For the record, Bedi is not the only woman to cremate a loved one. When former prime minister Atal Bihari Vajpayee died in August 2018, his adopted daughter Namita Kaul Bhattacharya did his last rites. In 2014, Pankaja Munde lit the pyre of her father Gopinath Munde, a senior BJP leader in the western state of Maharashtra.

During the recent pandemic too, there were many instances where wives or daughters were seen performing last rites – sometimes because male family members had perished or were themselves infected with the virus or were unable to travel because of the lockdown.

But Bedi breaking with tradition upset some conservative Indians and right wing-trolls who ridiculed her on social media, insisting that the pyre should have been lit by her 10-year-old son. Some pointed out that it was against tradition for a woman to even visit a crematorium.

Hindu priests and religious scholars, however, told the BBC that there was no ban in the scriptures on women visiting a crematorium or performing the last rites of their loved ones.

So why are women discouraged from performing or attending cremations? The internet is full of bizarre theories, including one that says “women with long dark hair can be easily possessed by spirits roaming the crematoria”.

But Bhagwan Dutt Pathak, a retired professor of Sanskrit in the northern town of Mirzapur, says the reasons were perhaps more mundane – that women mostly stayed at home and did the chores while men worked outdoors and took on work that involved heavy lifting.

Prof Kaushalendra Pandey, who teaches Sanskrit literature at the prestigious Banaras Hindu University, says there are references in ancient texts of wives performing the last rights if a man died without leaving a son or a daughter or a male relative such as a brother. Even daughters, he says, had the right to do the last rites.

During the recent pandemic, many women were seen participating in cremations of loves ones

“The ancient Hindu society was very liberal and women enjoyed tremendous freedoms. Conservatism came as a reaction to other religions, first to Buddhism and then to Islam and Christianity,” he says.

Manoj Kumar Pandey, a priest who specialises in funeral rites, says the current belief that a cremation should be done by the eldest son is rooted in the Garun Puran – a Hindu religious text that deals with funeral rites, and is believed to be at least 1,000 years old. The book though is silent on the role of women and does not forbid them from funeral rituals.

Prof Pandey says Bedi was “right” to do her husband’s cremation. “From the photographs, it appears that her attachment with her husband was very deep. She was also trying to protect her son who is very young. She’s a very accomplished woman and I believe what she did was right.”

The reason women do not go to a crematorium, he says, is for their own wellbeing because they may be traumatised by the death rituals as they are “weaker and softer” – a view many women strongly disagree with.

Shailaja Bajpai, Readers’ Editor and Editorial Advisor of news website The Print, says although in smaller towns and rural India, women still rarely attend funerals, in cities, it’s now normal for them to be present.

“In fact now it’s misunderstood if you don’t go because people also come to the cremation ground to pay their respects and offer support,” she says.

Ms Bajpai says she has attended many cremations, including her parents.

“I went because I wanted to be there to say goodbye. For me it was the final closure. But my female relatives chose not to go. The belief that women don’t go for cremations has come down from the past and many women in our families don’t question it and I respect their belief.

“It’s our personal individual choice and it should be respected. We should be allowed to do what we want to,” she said.