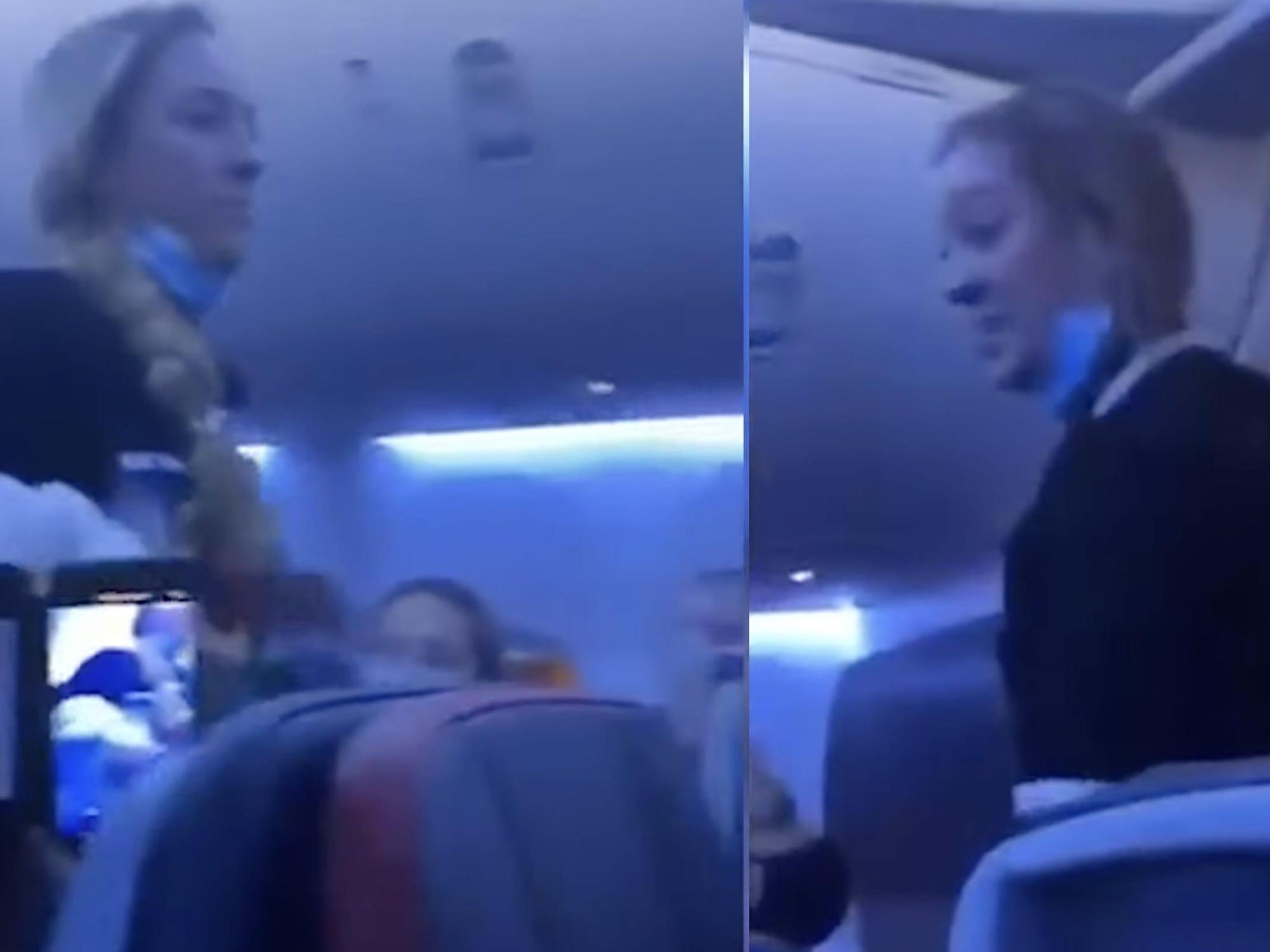 According to various outlets, a video went viral showing a woman being ejected from a plane after making homophobic remarks. Photo by Bob Riha/WireImage

A clip reportedly went viral showing a woman being kicked from a plane while making anti-gay comments.

In a statement, American Airlines appeared to confirm the incident happened on one of their flights.

According to recent data, the number of unruly airplane passengers has surged in the last year.

A video in which a woman said she does not “talk to [her] kids about same-sex marriage” after being kicked off a flight for violating the federal mask mandate is circulating online.

According to The Dallas Morning News, The Daily Dot, and other outlets, the video went viral earlier this week when it was shared on YouTube but has since been deleted.

In the video, which was originally taken on Snapchat, the woman can be seen following the rest of her party, which appeared to include children, out of the plane while yelling at other people. Her mask was pulled down to her chin.

The woman can be heard calling another traveler a homophobic slur multiple times. She also accused another passenger of “corrupting Disney.”

“You think I talk to my kids about same-sex marriage,” the woman said toward the end of the video as she began walking back up the aisle. “No, we don’t talk about that. But if we all want to talk about it, let’s talk about it.”

It was unclear what sparked the outburst.

The woman has been named in some reports and in tweets, including one that has 20,000 views. American Airlines did not confirm the person’s identity but appeared to verify the incident happened on one of their flights from Orlando, Florida, to Dallas/Fort Worth International Airport in Texas.

“Before departure on June 12, American Airlines flight 462 with service from Orlando (MCO) to Dallas Fort Worth (DFW) returned to the gate at MCO after a group of passengers refused to comply with the federal mask mandate and became verbally abusive to team members and other customers,” a spokesperson told Insider. “Law enforcement met the flight at the gate and the disruptive customers exited the aircraft.”

The spokesperson also said that the “individuals were denied further travel.”

Throughout the video, other passengers can be heard yelling back at the woman. “No one wants to listen to your bigotry, get off the plane,” one person said, to the applause of the other passengers.

The number of disorderly passengers on planes has risen in the last year. In January, the Federal Aviation Administration (FAA) announced they were adopting a strict zero-tolerance policy against unruly passengers, citing a rise in incidents related to masks.

According to recent data from the FAA, which did not immediately respond to a request for comment for this story, there have been over 3,500 reports of unruly passengers by other travelers from January 1 to July 20. Two-thirds of those incidents were mask-related, the FAA said.

Insider previously reported that the average yearly number of reports has already been nearly tripled in 2021 and that the FAA has launched a task force to investigate the rise.

The video fits into the canon of viral “Karen” videos which show usually white women acting badly in public. Insider previously reported on the “Victoria’s Secret Karen” saga, wherein a white woman chased a Nigerian-American woman around a Victoria’s Secret in New Jersey.

To read more stories like this, check out Insider’s digital-culture coverage here.

FILE – POPE ALTERS RULES FOR WOMEN WHO HAD ABORTIONS