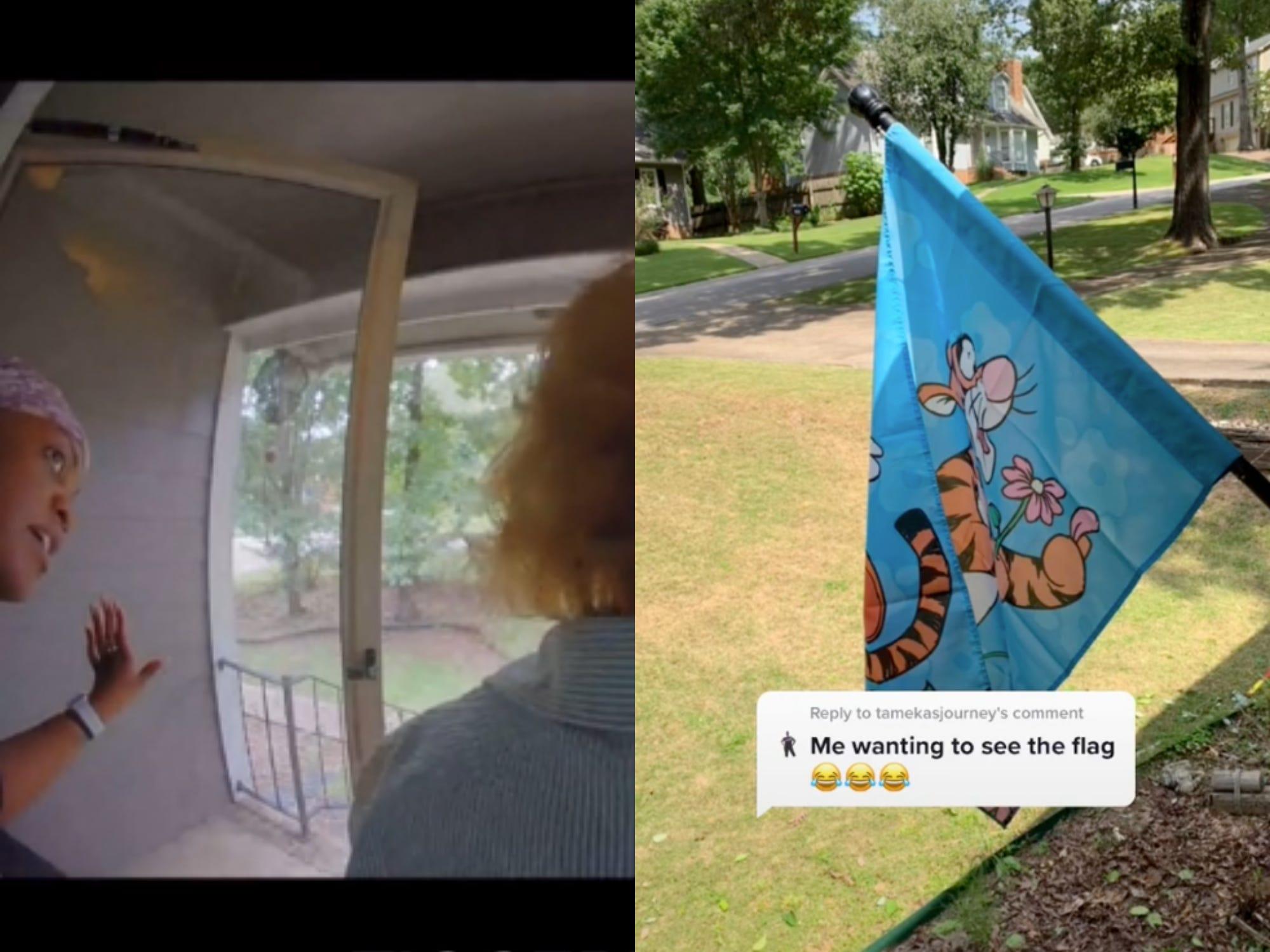 A woman uploaded a video showing someone she called a “neighborhood Karen” confronting her over a flag featuring Tigger from “Winnie the Pooh.” @tizzybizzy92/TikTok

A viral video shows a woman saying she doesn’t like someone’s Tigger “Winnie the Pooh” flag.

Tayler Bishop posted a video of her interaction with the woman, calling her a “Neighborhood Karen.”

The video went viral on both TikTok and Twitter, inspiring support and commentary.

A viral TikTok video shows a woman described as a “Neighborhood Karen” approaching another woman’s front door to say that she didn’t like a flag with the character Tigger from “Winnie the Pooh” hanging outside her house.

The video was posted on Saturday by TikTok user Tayler Bishop (@tizzybizzy92), who also goes by the “stage name” Ambrosia. It has since amassed 1.1 million likes and over 10.5 million views on TikTok. The video appears to be clipped from a porch security camera.

“I want to talk about this Tigger flag. I don’t like it,” the woman, who Bishop calls a “neighborhood Karen” in the caption, says in the video. The woman goes on to say that the neighborhood has rules but she doesn’t want to “have to go find out what they are.” When Bishop says in the video that the neighborhood isn’t under a homeowners’ association, the woman says that “there’s rules for the community” and reiterates that she doesn’t like the flag.

“It makes it look tacky, makes the neighborhood look tacky,” the woman says.

In a follow-up video, Bishop shows the flag that the woman was complaining about.

“So this was the offensive flag,” she says, showing an image of a teal flag with the character holding a flower. “Yes, it is Tigger from ‘Winnie the Pooh.'”

Bishop told Insider via direct message that she hasn’t seen or heard from the woman outside of what she called a “drive by apology” in a subsequent TikTok video. Bishop says in the video that the woman shouted out the window that she was sorry while driving by her house.

On TikTok, people expressed support and confusion over the woman’s distaste of the flag.

“You handled that so well,” another comment on the post reads. “She was looking for an argument and you ruined her day by not giving it to her.”

The video has gone viral on other social media platforms as well, inspiring commentary on Twitter.

“Some white people continue to have a strange entitled obsession with rule enforcement and policing other free people, that can be directly traced to their relationship with the police and America’s historical legacy of white supremacy,” Emmy-winning comedian Travon Free wrote on Twitter, quote retweeting the original video. “It’s a Tigger Flag.”

The “Karen” moniker used in the video has been popularized on the internet in recent years as way to critique what many say is a pervasive attitude of white entitlement among many Americans. Despite some dissent over the term, it’s been associated with countless viral videos in recent months.

“We will be putting a Tigger flag on our apartment’s front door,” “Billions” showrunner Brian Koppelman wrote in a tweet.

Bishop told Insider that she wasn’t expecting to go viral.

“The support has been overwhelming and appreciated,” she said.

To read more stories like this, check out Insider’s digital culture coverage here.