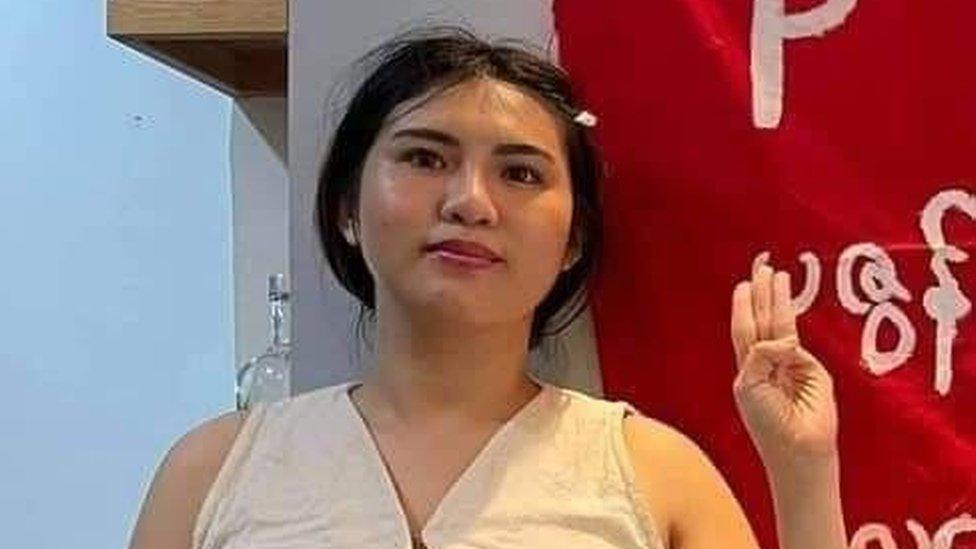 Even after six months of horrifying news from Myanmar, it is an incident that’s shocked the country – five people who chose to jump from a building they were hiding in, some to their deaths, rather than face arrest.

The police have condemned the group as terrorists, but the husband of one victim tells the BBC she was a compassionate wife and mother who felt she was working to alleviate the people’s suffering.

This is the tale of her untimely death.

It was on Tuesday afternoon that eight young activists found themselves trapped by a police raid.

The military had seized power months earlier in February, throwing the country into turmoil as millions protested against the coup.

At least 900 people have been killed by the military’s violent response, and thousands more arrested.

Wai Wai Myint was one of those caught up in the movement opposing the military junta.

She was one of the five who jumped off a commercial building in downtown Yangon as the police charged in, falling onto a concrete pavement. She and at least one other person died at the scene.

The other three have been taken to a military-run hospital.

In the first photograph of Wai Wai Myint that began circulating on social media after news of her death, she stands ramrod straight, looking defiantly at the camera. Her fingers are raised in the three-finger Hunger Games salute that has become the trademark gesture used by young dissidents in South East Asia.

The military authorities have described the group she was with as terrorists who were planning to plant bombs.

They have published confessions by two of the activists who did not jump and were arrested there, and photographs of what they say were ingredients for explosives.

But that is not the image painted by her husband, Soe Myat Thu.

He had to say goodbye to Apple, as he calls her, at a military-organised mass cremation for her and four other people, including the young man who died with her when they jumped.

No photographs were allowed, and the families were not permitted to take away the ashes.

The military junta in Myanmar has been trying to restrict the funerals of those killed in the uprising against the coup, as they often turn into anti-military demonstrations – sometimes cremating bodies in secret rather than returning them to their relatives.

Soe Myat Thu held up a flower for her, and took that back home in place of her remains.

The move towards politics

They were a comfortably middle-class couple, both ethnic Chinese, with a six year-old daughter. Soe Myat Thu is a dentist, and Wai Wai Myint was a gems and jewellery trader.

She had been brought up by two aunts, he told the BBC, and always had plenty of money to enjoy life.

Photographs of her show a well made-up young woman posing in stylish clothes.

She liked going out clubbing with girlfriends, he says, but had a strong social conscience, regularly donating money to poorer neighbours or to animal welfare groups.

He said the couple had not been interested in politics at all, with Wai Wai Myint even saying that they should stay away because it could be dangerous.

When the coup happened, she did not react much at first.

But she was kind-hearted, he says, and became upset when the first protester to die, a young woman called Mya Thwe Thwe Khaing, was fatally shot in the capital Nyapyitaw a week after the coup. Her death was widely mourned and triggered further anger against authorities.

Wai Wai Myint donated money to Mya Thwe Thwe Khaing’s family, and began posting on her Facebook page about other victims of the increasingly violent military response to the civil disobedience movement.

He said the couple both knew they could not change things themselves, but when she saw people being shot by the military she became more outspoken in her comments. He describes her as a bold character who was more ready to take risks than he was.

Soe Myat Thu says she was arrested once during a protest, and he had to negotiate to get her out of custody.

She was very angry about that, he remembers, because of the way she had been kicked and beaten.

He had then warned her not to go to any more protests, reminding her that she had a daughter to care for.

After that, he believed that his wife was no longer involved with the opposition. It has evolved from a non-violent protest movement in the weeks after the coup to an underground resistance which today uses handmade guns and bombs, and is even said to occasionally assassinate officials who co-operate with the military.

He says he knew the other activists who were caught with Wai Wai Myint, in the building where they were staying on 44th Street in downtown Yangon, not far from their home.

They were all members of the Pzundaung Botahtaung Young Strike Committee, one of many groups formed in Yangon in the first days after the coup to resist it.

She used to hang out with them, he says, and sometimes brought them to their house to eat and use their internet.

“I admired and felt sorry for them as they were prepared to go out and face danger when I would not,” he said.

But he had no idea she was going to join them in their hideout on Tuesday; she had only told him that she was going out for a little while, and left the house without changing her clothes and putting on make-up, as she usually did.

It is not clear what Wai Wai Myint’s role was in the group, or whether she was even a member. It was possible that she was only paying the rent and offering other kinds of material support.

Activists opposing the coup in Myanmar have to keep moving from place to place to avoid arrest.

Soe Myint Thu believes it was what she felt about the suffering of the people, and her determination not to accept the military junta, that eventually drove her to her fate.

Why Oprah's Meghan and Harry interview drew 17M US viewers