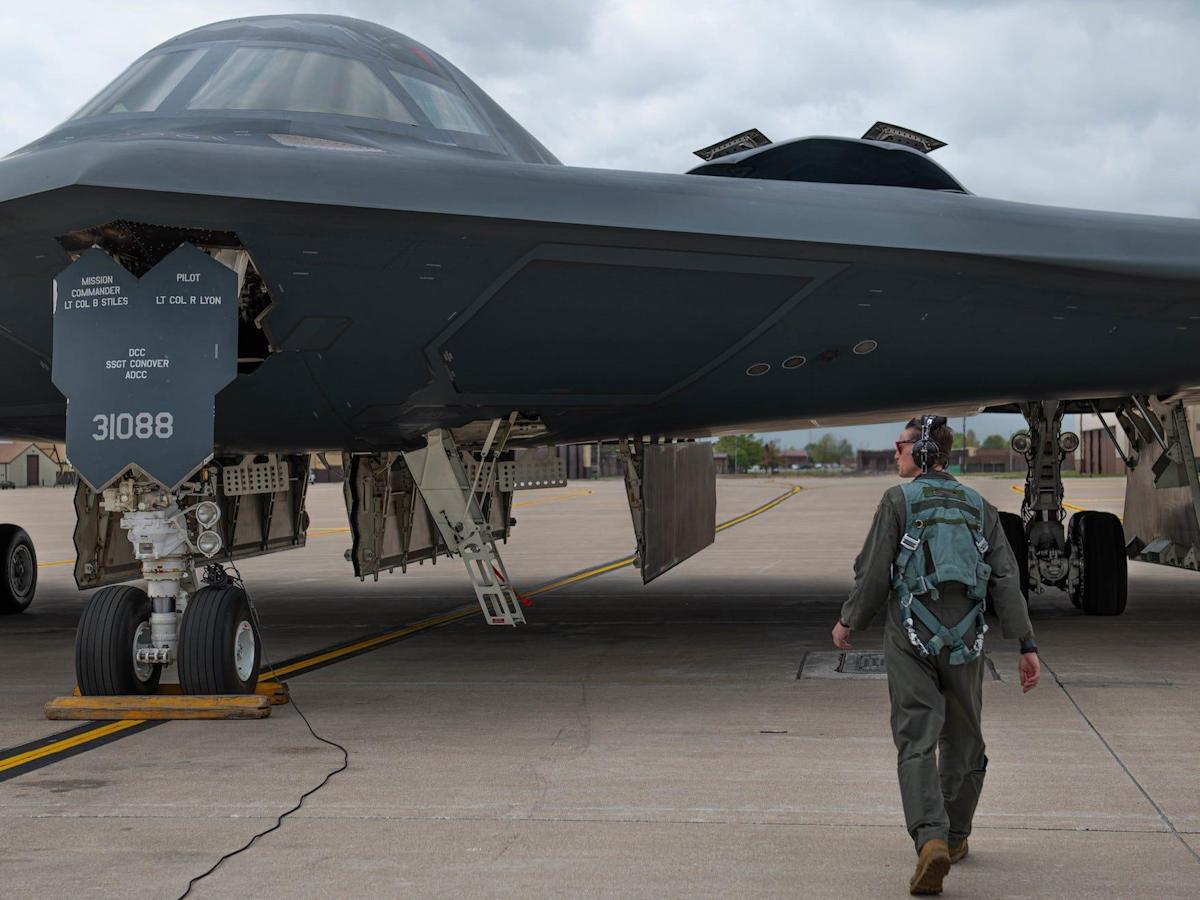 US Air Force airmen perform a post-flight check on a B-2 Spirit after it landed at Whiteman Air Force Base in Missouri, April 28, 2021. US Air Force/Airman 1st Class Victoria Hommel

As a dedicated crew chief, US Air Force Staff Sgt. Elizabeth Lambert has spent thousands of hours working on the B-2.

But it wasn’t until April 31, 2021, that Lambert was able to board the stealth bomber and fly in it.

She earned the flight as the winner of the Thomas N. Barnes Crew Chief of the Year Award, which rewards the best dedicated crew chief with an incentive flight.

When US Air Force Staff Sgt. Elizabeth Lambert enlisted in 2013, she went out to the flight line at Whiteman Air Force Base and was told to pick which aircraft she wanted to work on.

The B-2 Spirit – America’s stealth bomber – stood out.

“I got brought out to the hangar and introduced to this oddly shaped black aircraft,” says Lambert, now a dedicated B-2 crew chief in the 509th’s Aircraft Maintenance Squadron, which services the military’s fleet of 20 operational B-2s.

The rare flying-wing design distinguishes the B-2 from other bombers. The unusual paint job and curvy triangular shape add to its mystique. “There’s no tail on it, so most people think it flies on pure magic,” Lambert says.

Lambert chose the B-2 and got to work learning what it takes to maintain one of the $2 billion stealth bombers. Designed by Northrop Corporation (now called Northrop Grumman) during the Cold War, the B-2 can release up to 40,000 pounds of both nuclear and conventional munitions.

That and the bomber’s long range and low observability make it arguably the most capable warplane in the world.

Lambert approaches a B-2 on the flight line at Whiteman Air Force Base, April 28, 2021. US Air Force/Airman 1st Class Victoria Hommel

Lambert now oversees the day-to-day maintenance of her aircraft, named the Spirit of New York.

She leads three other servicemen in inspecting the aircraft before and after flights and by bringing in the necessary shops and teams to service the plane, from its hydraulics and environmental components to its flight control and communications systems.

For two years, she has watched the Spirit of New York take off and land, launching it from its dock – she and other maintainers are the last to touch the aircraft – and “catching” it upon its return. The pilots communicate over the intercom. She watches the black saucer-shaped plane whizz into the sky and quickly turn into a tiny black dot.

Lambert and her team service the bomber at Whiteman, where she and the aircraft are based, and when it deploys around the world. It’s not part of her job to know where the Spirit of New York has been or where it’s going, however.

“We put all the time in standing there for an hour and a half and getting these guys ready to go,” she says. “We see the runway and are told what order they’re going to be [taking off] in. Then we say ‘Hey, it’s up.’ But we never know where it’s going or what it’s doing.”

Lambert boards a B-2 for her incentive flight at Whiteman Air Force Base, April 30, 2021. US Air Force/Airman 1st Class Victoria Hommel

But on April 31, Lambert boarded the B-2 she has spent thousands of hours working on and actually flew in it.

She had earned the flight as the recipient of the annual Thomas N. Barnes Crew Chief of the Year Award, which honors the best dedicated crew chief with an incentive flight. She beat about 200 other enlisted airmen who were also nominated.

Her Spirit number, 760, marks her as the 760th person to fly in a B-2. While there are 10 active duty women B-2 pilots, Lambert is the first enlisted servicewoman to fly in one.

The night before her incentive flight, she only slept four hours. Taking off was a surprise. Despite the aircraft’s hulking figure – it is 17 feet tall, has a 172-foot wingspan, and weighs ​​160,000 pounds unloaded – she didn’t feel a thing.

She credits the extra smooth ride to her pilot. He was the mission commander on the aircraft, and it was his last official flight in the bomber.

She appreciated seeing the flight controls in action. “They are really cool because of how they move and keep the jet from corpusing, like a dolphin going in and out of the water,” she says.

Lambert hugs members of her squadron before boarding a B-2 for her incentive flight, April 28, 2021. US Air Force/Airman 1st Class Victoria Hommel

Another new experience came during aerial refueling. They caught up to the tanker and talked to its pilot through their intercoms while getting into its air stream.

“The B-2 has a lot of lift. We’d get sucked in and do these square movements,” she says of the refuel experience. “I’m looking at the boom operator, and we’re close enough that I can see his face. It was insane.”

They hooked up to the KC-135 Stratotanker and took on some 10,000 pounds of fuel before disconnecting to continue their flight.

It was particularly surreal to go from her normal position – standing on the ground talking to the pilot over the intercom as he lands – to having her fellow maintainers catching her.

Maintainers normally greet returning pilots with sharp salutes and handshakes or fist bumps, a ritual that Lambert has now seen on both sides.

When the Spirit of New York landed, a crowd of 50 people – including many she works with every day, along with her former commanders and flight chiefs and her husband – were there waiting.

Lambert and Maj. James Powers, Eighth Air Force executive officer to the commander, next to a B-2 at Whiteman Air Force Base, April 30, 2021. US Air Force/Airman 1st Class Victoria Hommel

She’s grateful for the experience and to be back to her regular duty. She runs a tight ship, striving to have the cleanest jet and crew station.

Just four of the active-duty crew chiefs at Whiteman are women, and Lambert has worked 12-hour days for one and a half years straight, regularly coming in on weekends and days off, to get her job done.

“My name is on that aircraft,” she says, “and if I’m going to put my name to anything, it’s going to be as perfect as you can get it.”

Now her goal is to get her maintenance crew to also have the chance to earn an incentive flight and experience what she did.

Lambert recently took her first leave in more than two years, but she stayed local. She hasn’t flown since her B-2 experience. She knows the next trip won’t be as exciting as the last.

“I don’t think anything’s going to be that smooth,” she says.