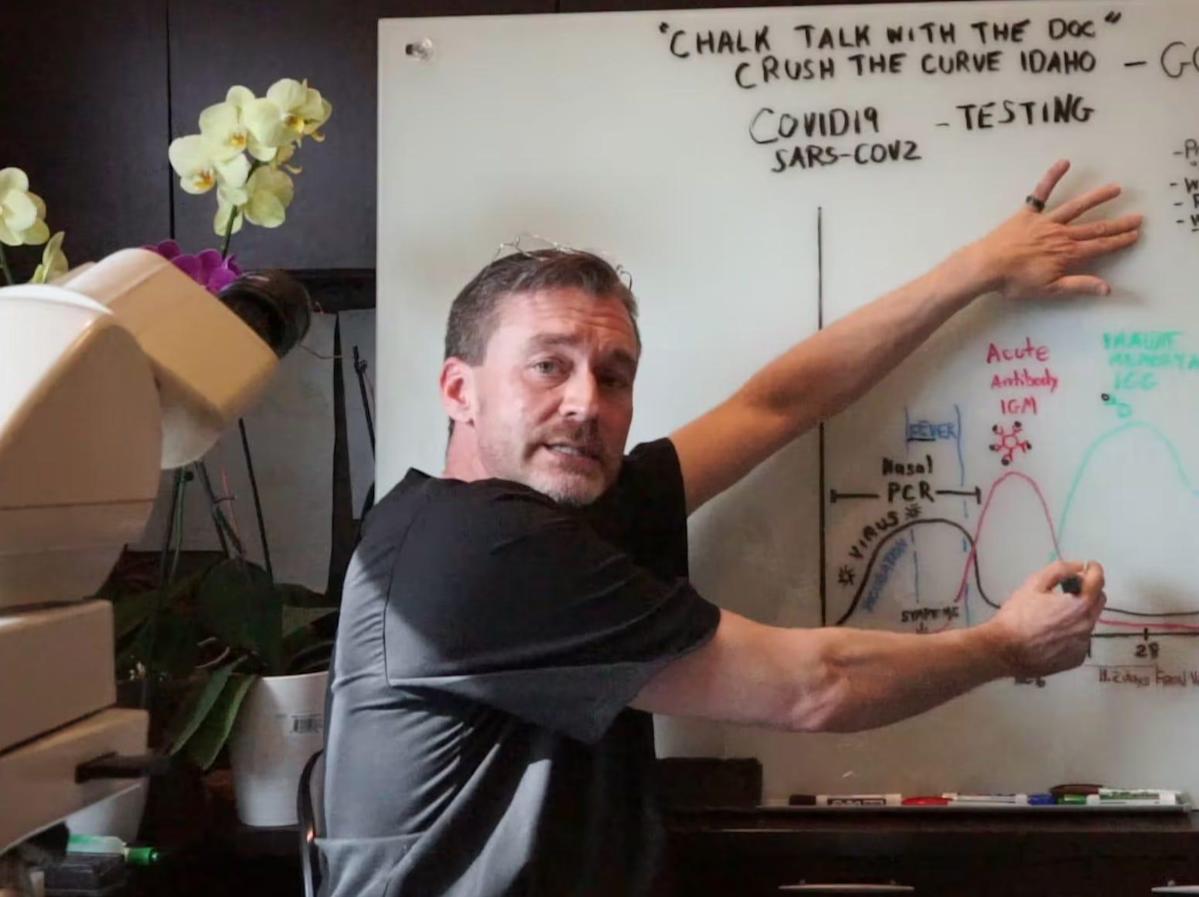 A doctor who called the COVID-19 vaccine “needle rape” made it to one of Idaho’s top health boards.

Dr Ryan Cole, a pathologist with no public health experience, was championed by the GOP.

His victory came as Idaho was overrun with severe COVID-19 cases, its lowest ebb in the pandemic.

In Boise, Idaho, a doctor in a lab coat offered comforting words to concerned parents and school governors about COVID-19 restrictions for the new semester.

“There’s really statistically no efficacy in masks,” Dr. Ryan Cole said airily, and incorrectly, on an August 26 Zoom call with Peace Valley Charter School, which was deciding what measures to implement when lessons restarted.

“I think we need to be prudent and say it’s time to let children be children,” Cole said.

Cole’s specialism is dermopathology – a discipline focused on diseases of the skin which has little relevance to respiratory conditions like COVID-19.

Nonetheless, Cole is a celebrated figure among anti-vaxxers. He made headlines in July by calling the vaccine the “clot shot” and “needle rape” in a presentation to America’s Frontline Doctors (AFD), a group known for COVID-19 misinformation.

By the end of the Peace Valley school meeting, the board had scrapped its plan for a mask mandate, as the Idaho Statesman reported.

Across the state, cases were surging. With just 39% of the state fully vaccinated – one of the lowest rates in the country – hundreds of people needed hospital treatment, stretching the system to its limits.

Two weeks later, that system broke. Ten of the state’s hospitals were put under crisis protocols, under which patients are told they may get care below the usual minimum standard, like being treated in makeshift wards or without proper equipment.

On the same day, Idaho’s largest public health board, the Central District Board of Health (CDH) announced that Cole would become its seventh member.

According to campaigners and former officials in Idaho who spoke to Insider, Cole’s elevation demonstrates how the state’s public health apparatus was stripped back and politicized as the pandemic rages.

The CDH is Idaho’s biggest health authority, covering Ada, Boise, Elmore, and Valley counties. Its board is elected by 12 commissioners, three from each county.

Cole made it onto the board thanks to a backlash against CDH restrictions which propelled coronavirus skeptics into positions of power.

In an interview with Insider, Cole denied being anti-vaccine, saying that he supports vaccination in general and has had many himself.

But he said he has not had the COVID-19 shot, and argued that geting it should be a personal choice. He did not address his “needle rape” remarks.

He has also derided the vaccine as “experimental,” a common insult among anti-vaxxers. All vaccines used in the US went through extensive clinical trials before being given temporary authorization. The Pfizer vaccine has since got full approval from the FDA.

Cole is a regular on the anti-vaxx and conservative speaking circuit, giving talks to groups such AFD. He has been championed by the rightwing Idaho Freedom Foundation and by Infowars.

He has also spoken on the podcasts of lawyer and conservative talk show host Daniel Horowitz, and anti-vaxx conspiracy theorist Dr Sherri Tenpenny.

In his lab, Cole frequently tells his listeners, he sees data that suggests the vaccine is harming people’s immune systems. He acknowledged to Insider that adverse effects after vaccination are extremely rare, but this point rarely comes up in his talks.

“This is no longer good science. This is a poisonous attack on our population,” Cole said of the vaccination campaign at the AFD summit, to loud applause. “And it needs to stop now.”

He also told Insider he is concerned that the vaccine is causing mutations like the Delta variant, a false claim that has been repeatedly debunked.

Cole has instead promoted the anti-parasitic drug ivermectin as a COVID-19 treatment. The drug is currently considered, at best, unproven and at worst a dangerous distraction from better treatment, as The Guardian reported.

He has also touted Vitamin D as a substitue for mask-wearing and social distancing, another claim which has been scrutinized and found wanting.

Unlike many of those he was addressing at the AFD summit, Cole’s resume and affable disposition make him harder to dismiss.

None of the sources Insider spoke to questioned Cole’s expertise as a pathologist, which he says is backed up by five years at the widely respected Mayo Clinic around 2000.

Cole told Insider that vaccinology and epidemiology “have been part of my entire career,” though he did not name specific qualifications or experience to substantiate the claim.

Data from those tests – which is not public – “gives him a very unique view on broad public health,” Cole Diagnostics spokesperson Kelli Cole told Insider.

Insider spoke to one of the leading voices in opposition to Cole’s appointment, Dr David Pate. He is the former CEO of the non-profit St Luke’s Healthcare System, which operates in Idaho and other states.

He is also a good friend and co-author with Dr. Ted Epperly, whom Cole unseated on the CDH board.

Pate told Insider that the ideas Cole promotes are “simply not consistent” with the science of public health. “And it’s undermining our public health efforts,” he said.

He added: “Dr. Cole is already using the cloak of his status as a licensed physician. He is using all of those things to give him an air of legitimacy.

“Now he will have this additional appointment that he can tout, that he is a public health board member.”

“Ryan Cole is not an infectious disease expert,” he told Insider. “Ryan Cole is a guy who looks into a microscope.”

How the GOP ousted the public-health establishment

Dr Ryan Cole taking his seat to be interviewed for the CDH Board on August 9, 2021. Ada County, Idaho/YouTube

Opposition to Cole’s appointment came from the Idaho Medical Association, several of the state’s medical experts, the editorial board of the Idaho Statesman, and local campaigners – but ultimately achieved little.

Elections in 2020 ousted officials including Diana Lachiondo, a Democrat, one of the three commissioners in Ada County, and one of 12 officials with a vote to appoint Cole.

In a viral post from December that year, Lachiondo described an angry crowd arriving at her home, armed and making threatening sounds. A similar thing happened to Epperly, Cole’s predecessor.

Lachiondo’s former seat and others were occupied by Republicans who were able to supply the seven votes needed to replace Epperly with Cole.

Around the same time, the Republican-dominated Idaho legislature stripped public-health officials of the power to directly impose public-health restrictions, relegating them to an advisory role that lawmakers can choose to ignore.

Rod Beck and Ryan Davidson, newly-elected Republican commissioners in Ada County, both said that the CDH was guilty of overreach and needed reform.

Davidson, in a June Facebook post, accused the CDH of participating in “the single greatest violation of individual freedom of the modern age” for its restrictions, which included insisting on indoor masking, banning large gatherings, and strongly recommending closure of some businesses.

Epperly’s “doomsday” predictions had not come true, he said – notably before the surge which overwhelmed Idaho’s health system. (Davidson did not respond to a detailed request for comment.) He became a major champion of Cole and his hands-off, personal-choice approach to public health.

Epperly sees a link between the mobs that hounded him and Lachiondo and the Republicans who ushered in Cole.

“That was how visceral this has become amongst people,” he said in an interview with Insider.

Virginia Beach woman gets 12 years for what could be biggest coupon scheme in U.S. history

US Soccer says it has offered men, women identical contracts