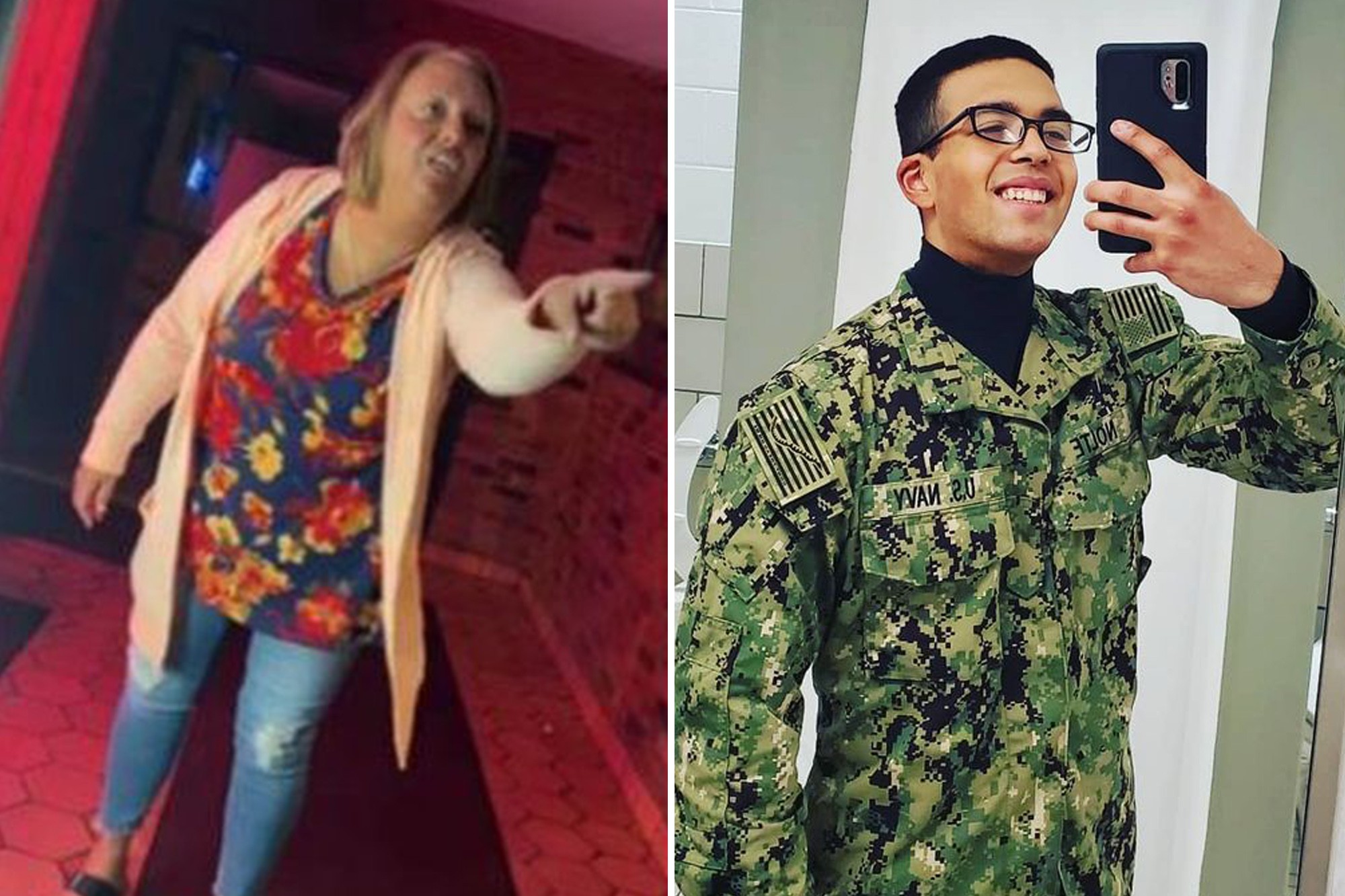 An angry woman assaulted and cursed out a Navy sailor at a Connecticut pizzeria, claiming he was wearing a fake uniform on Sept. 11, shocking video shows.

The clip, posted to TikTok, shows a woman smacking the face of Navy sailor Sean Nolte Jr. as he got food Saturday at Central Pizza in Berlin.

“This is disgusting,” the woman says as she picks up Nolte’s cover from a counter and throws it at him. “Disgusting! You f-cking piece of sh-t!”

Someone recording the confrontation then tells the woman to leave before cops are called, prompting her to demand that Nolte “show his uniform” while calling him a “disgrace” to the country.

“That’s not a uniform, you piece of f-cking sh-t,” the woman continues before walking out of the restaurant.

A Connecticut woman screamed and slapped Navy sailor Sean Nolte Jr. calling his uniform fake and that he was a disgrace to the country. Berlin Police Department

Berlin police said in a statement Wednesday they have a probable identity for the woman after getting “many tips” from the public regarding the heated 62-second clip.

Nolte Jr. was at a local pizza joint on September 11, 2021 when the woman said that he was a fake despite having been shown his military ID.Instagram

“Up until yesterday and despite the widespread sharing of the video on social media, we received no information from the public as to the possible identity of the woman involved in the assault,” Acting Chief of Police Chris Ciuci said. “The investigation is ongoing and when probable cause is developed, we will apply for an arrest warrant.”

Nolte, of Harrisburg, Pennsylvania, detailed the caught-on-camera assault in a Facebook post, saying the incensed woman had been “constantly staring” at him after she walked in.

“As she leaves, she looks at me and says ‘nice smile’ very sarcastically,” Nolte said. “I reply ‘thank you, have a nice day ma’am’ and continue about my day. Not even 30 seconds later she comes marching back in, and yells at the pizzeria staff, ‘He is a fake, by the way, my husband is in the Army.’”

Nolte showed restraint while dealing with the incensed woman. According to patrons, he just smiled and was polite. Facebook

According to Nolte, the woman had been staring at him since he entered the restaurant.Instagram

Nolte said he tried to show the woman his valid military ID, but she wasn’t having it.

“As I realized there was no persuading this woman that I am not a fake, I politely say, ‘tell your husband thank you for his service for me, and have a nice day,’” Nolte continued.

Nolte was also a part of the Berlin volunteer fire department ever since he had graduated high school. Facebook

The woman walked out and quickly returned before grabbing Nolte’s uniform and tossing his cover on the ground. She then smacked the left side of his face before leaving, the sailor said.

“Being in uniform, I must maintain professionalism, so I stand there and proceed to wish her a nice day,” Nolte said. “Well, looks like some of our own people can’t recognize authenticity when they see it.”

Nolte is currently training at the Naval Submarine School in Groton. He’s also a volunteer firefighter in his hometown, the Hartford Courant reported.

“Sean’s a really good guy,” Chief Nick Wachter of Rescue Fire Company 37, a volunteer fire and EMS department, told the newspaper. “He joined us right out of high school and we’re lucky to have him.”

Many people praised Nolte for showing restraint during the incident.

“Uniform or not she would have gotten that slap back so fast she won’t know what hit her,” one reply to the sailor’s post read.

Virginia Beach woman gets 12 years for what could be biggest coupon scheme in U.S. history