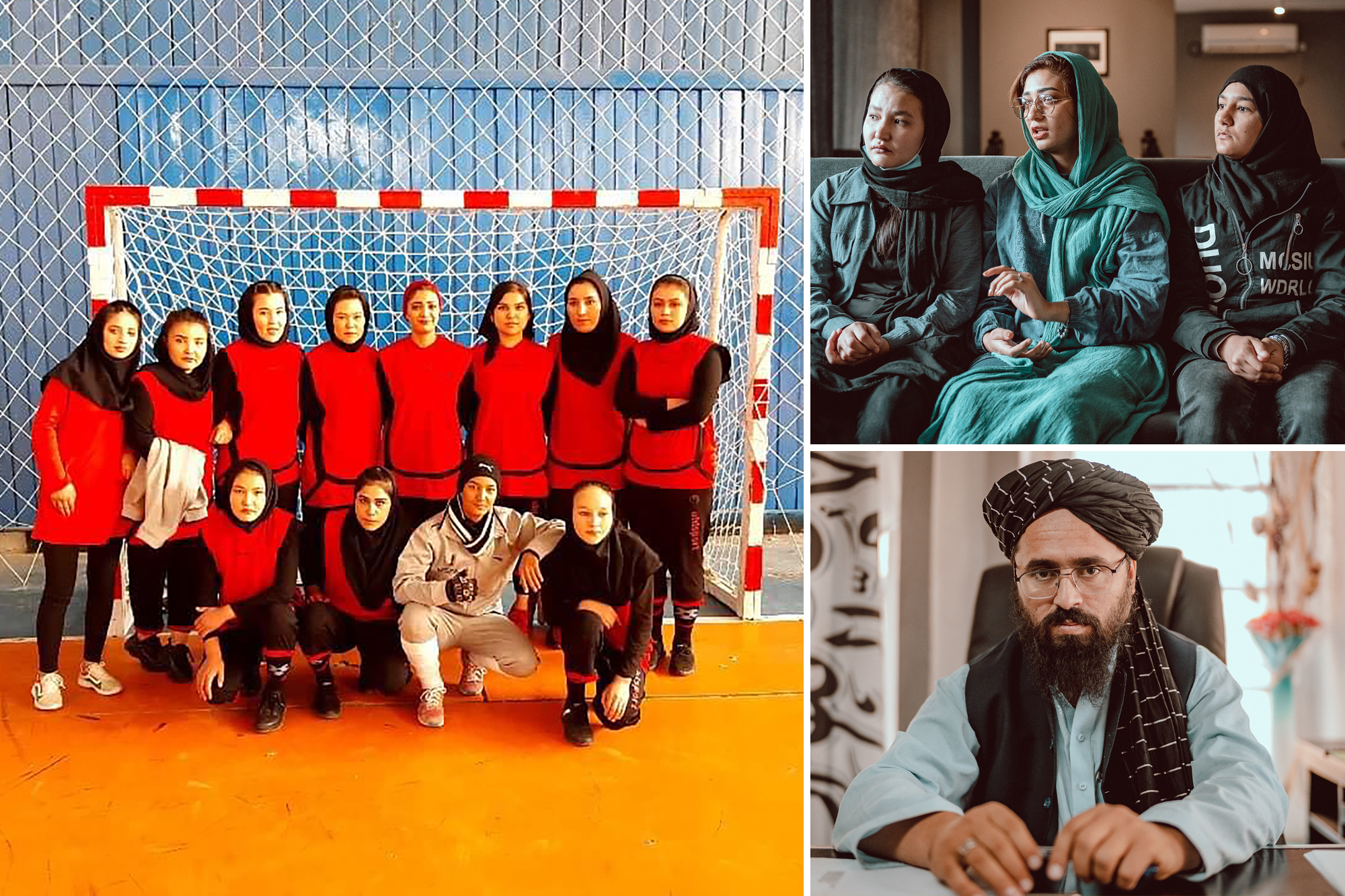 KABUL, Afghanistan — While many Afghan women’s and girl’s sports teams fled the country in the weeks following the Taliban’s Aug. 15 takeover, a team of handball players has been left behind.

The team tried desperately and fruitlessly to get inside Hamid Karzai International Airport amid the frantic US evacuation, according to team member Soraya Karimi, 25, who was also a law student and rights activist, as well as the proud daughter of a woman police officer. Still, each time they got close to the gates, authorities turned them away.

And over the ensuing weeks, she says, no further assistance efforts have been made.

“The teams of badminton, cricket, football [soccer] league teams, many of them have left. The only team left is us,” Soraya says. “The Afghanistan Handball Federation head was lazy and did nothing to get us out. We tried our best to get evacuated, but we couldn’t get out, and there has since been no correspondence.”

Now, the athletes say they are depressed, anxious, afraid and unsure — and unable to play the sport they love as they fear for their lives.

“The teams of badminton, cricket, football [soccer] league teams, many of them have left. The only team left is us,” Soraya Karimi explains.Jake Simkin

“The handball women sports team of Herat is warned to give up exercise and must not do further operations,” cautions the handwritten letter on official Islamic Emirate letterhead. “If this act is repeated, by the Mujahadeen of the Islamic Emirate, you will be severely punished according to Shariah.”

The letter came months after their teammate, national player Nooria Tabesh, was gunned down in her home in the northern province of Sar-e-pul in April. Local reports at the time indicated that the assailant fled to nearby Taliban-controlled pockets.

The International Sports Press Association subsequently condemned the fact that numerous similar incidents had spiked in the beleaguered country, often with no individual or group claiming responsibility and no justice or accountability for the crimes.

Soraya Karimi claims “the Afghanistan Handball Federation head was lazy and did nothing to get us out.”Jake Simkin

“The Taliban says that they have changed, but they have not changed, and they are tracking down (activists and athletes),” said Soraya, sitting alongside her teammates Basira, 18, Anisgul, 19, and Shakiba, 21. “The chief of the Afghan badminton disappeared after the Taliban took over, he has been kidnapped, and we don’t know where he is now. And our teammate was killed during the holy month of Ramadan.”

And on their hurried journey two weeks ago from their homes in Herat to the seemingly safer confines of Kabul — where they aren’t as known by the community and thus face fewer risks — Soraya and her brother were beaten at a Taliban checkpoint at Kandahar. His entire left side seeped purple from the butt of a rifle after the Taliban disapproved of the content on his phone.

Compounding the danger they face in their hometown, the women explained that a famed Herat Malawi — a high-ranking religious scholar — has denounced the young women publicly, stating that they have “no dignity.”

A handwritten letter on official Islamic Emirate letterhead warned the team that they “will be severely punished according to Shariah” if they continue playing.Jake Simkin

Under the previous reign of the Taliban — officially called the Islamic Emirate of Afghanistan — women were strictly barred from all public sports and only allowed to emerge from the home cloaked in a blue burqa and accompanied by a male relative.

While the Taliban of 2021 claim that they are now more open-minded, leadership is refusing to budge on the matter of women and sports. On the contrary, the top brass has made it clear that this era is a cause for even more concern than their last rule, given that the potential of photos and videos of girls amid sports would likely make their way into the media and tarnish their hardline Islamic view that women should not be in any way exposed.

Throughout the two-decade US occupation, despite all its fallibility, girls and women cracked through the deeply conservative social fabric to not only learn to play in public settings but actively compete in everything from boxing, badminton and basketball to cricket, chess, karate, powerlifting and hockey, across the world.

Under the previous reign of the Taliban, women were strictly barred from all public sports.Jake Simkin

The handball competitors were no exception. The first Afghanistan Women’s National Handball Championship was held in November 2018, with five teams from three provinces involved in the contest. Since then, the women have participated in various matches — from Iran and Pakistan to Bangladesh and India.

But according to Akif Muhajer, the 32-year-old, newly appointed spokesperson for the reinstated Ministry for the Propagation of Virtue and Prevention of Vice, such sports do not have a place in Afghan society and mainly were show-and-tell pawns under the previous Ashraf Ghani-led government.

“Even the previous government didn’t support women’s sports. It was just a nominal thing to show people in the United States so they could collect lots of money in donations,” he said.

Akif Muhajer is the newly appointed spokesperson for the reinstated Ministry for the Propagation of Virtue and Prevention of Vice.Jake Simkin

Some female Afghan athletes have managed to find refuge abroad. Last month, the Afghan national female soccer team and their families crossed into neighboring Pakistan following a string of reported threats en route to the United States and Europe.

This week, dozens of Afghan soccer players and their relatives were granted resettlement in the UK just as their Pakistan temporary visas were reaching expiration — which would have compelled them to return to their Taliban-controlled homeland.

And the Taliban’s draconian viewpoint on women could hinder Afghan men’s chances at competing on the world stage too. For example, the International Cricket Council mandates that countries must have women’s teams to meet full membership requirements.

A calendar of women playing sports sits on the desk of Akif Muhajer.Jake Simkin

The national handball team was listed to participate in the 18th Women’s Handball Championship in Amman, Jordan, last month. Instead, they spent that time running from house to house.

“We loved this sport from childhood. It was our dream to play. Our family supported us and convinced us to play the game,” Soraya says. “She says, we want the (Taliban) to understand, don’t keep us away from sports, from education. We are the future of the country. They should understand we are not of 20 years ago; we will stand for rights. We will fight.”

But staying, Soraya explains, is not an option.

Hollie McKay with members of the Herat handball team.Jake Simkin

“We are homeless now; wherever we go, (the Taliban) is looking for us. The whole team is under surveillance,” Soraya said. “I have received warnings — someone came past us on a bike — warning us that if we played sports, there would be consequences.

“If we don’t leave, we may face the same circumstances as our teammate Nooria,” she added.

Emotional Van Jones: How do I explain this to my children?