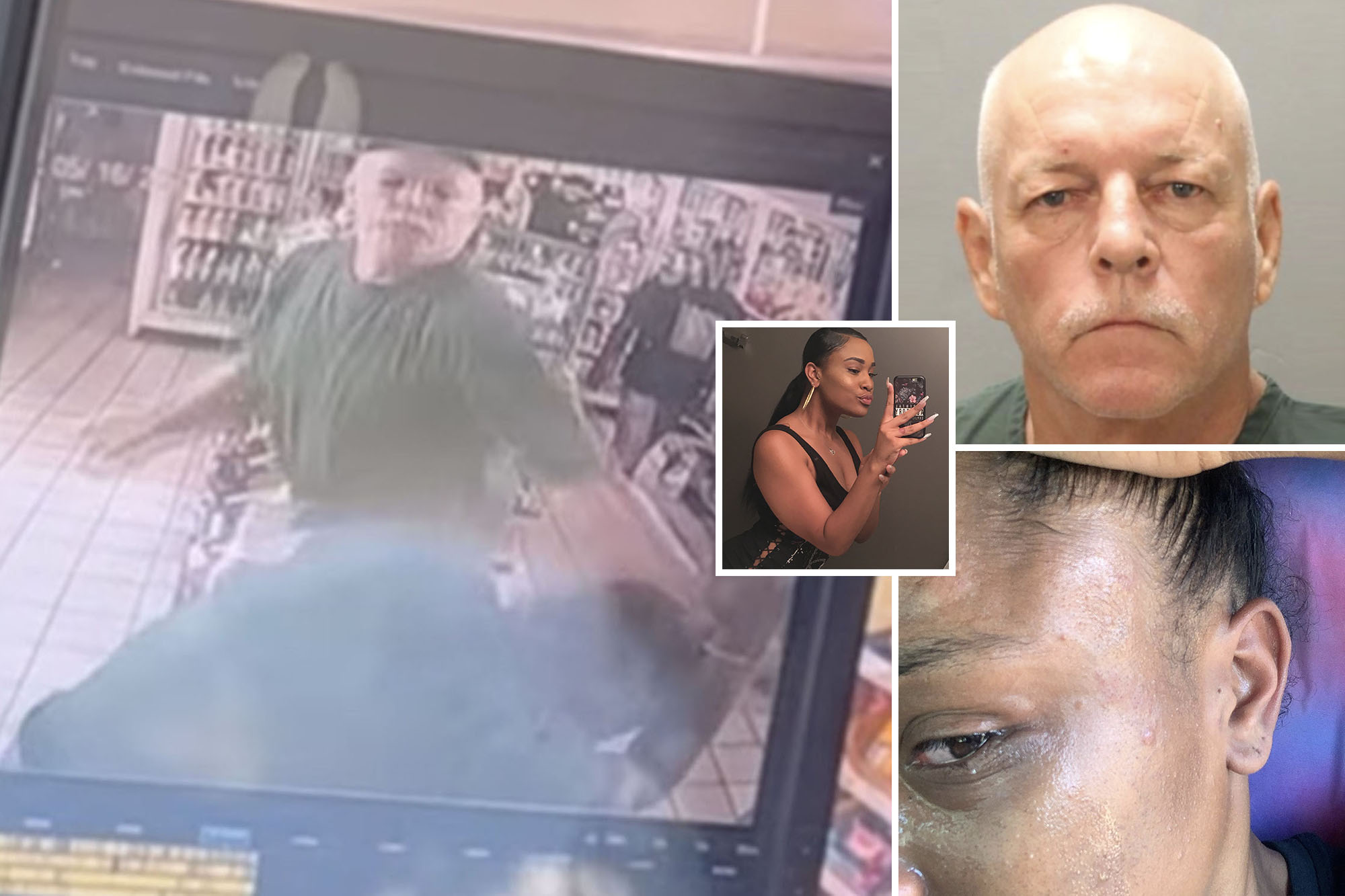 Shocking surveillance footage shows a middle-aged white man repeatedly punching a black woman in the face in what she called a “racist rampage” in a Florida gas station.

Rayme McCoy, 23, shared the footage in a Facebook post in which she claimed her attacker came into the BP station in Jacksonville “ranting and raving” about her “kind” needing to “go back.”

She told News4Jax that her attacker ominously warned her that he had a gun in his car when she asked from some space as he spat out his alleged racist tirade.

The footage she shared shows him suddenly punching her in the face — then throwing a flurry of at least 10 powerful blows as she helplessly tries to block his fists before he strolls out unchallenged.

“I was literally shocked — after the first hit, you can see my mouth drop,” McCoy told News4Jax of the clip, which does not have audio catching her claims of racist abuse.

“When he first hit me, I was like, ‘Woah!’ And then he kept hitting me,” she recalled.

“After actually seeing the video, it’s just shocking to see there [were] other people there and nobody did anything,” she said.

A woman told News4JAX a man used racist language before he attacked her on Monday inside an Arlington gas station.Facebook / Rayme McCoy

Rayme McCoy, 23, shared the footage in a Facebook post in which she claimed her attacker came into the BP station in Jacksonville “ranting and raving.” Facebook / Rayme McCoy

Jacksonville Sheriff’s Office (JSO) later announced that Kevin Williamson, 59, was arrested Friday night for the attack. He was taken into custody without incident after a “high-risk traffic stop,” the local station said, citing arrest documents.

Williamson was charged with misdemeanor battery — outraging activists calling for more serious charges to reflect McCoy’s allegation that it was a race-hate attack.

“That is NOT ENOUGH!” Ben Crump, the famed attorney involved in many of the most high-profile civil rights cases in recent US history, tweeted.

The footage she shared shows him suddenly punching her in the face — then throwing a flurry of at least 10 powerful blows.Facebook / Rayme McCoy

“This vicious assault MUST be prosecuted as a hate crime! We have to protect Black women!” he wrote.

Women sue Netflix over ‘Our Father’ documentary revealing their secret

'Is this the way we're supposed to live?': Blackwell gets emotional covering Buffalo shooting