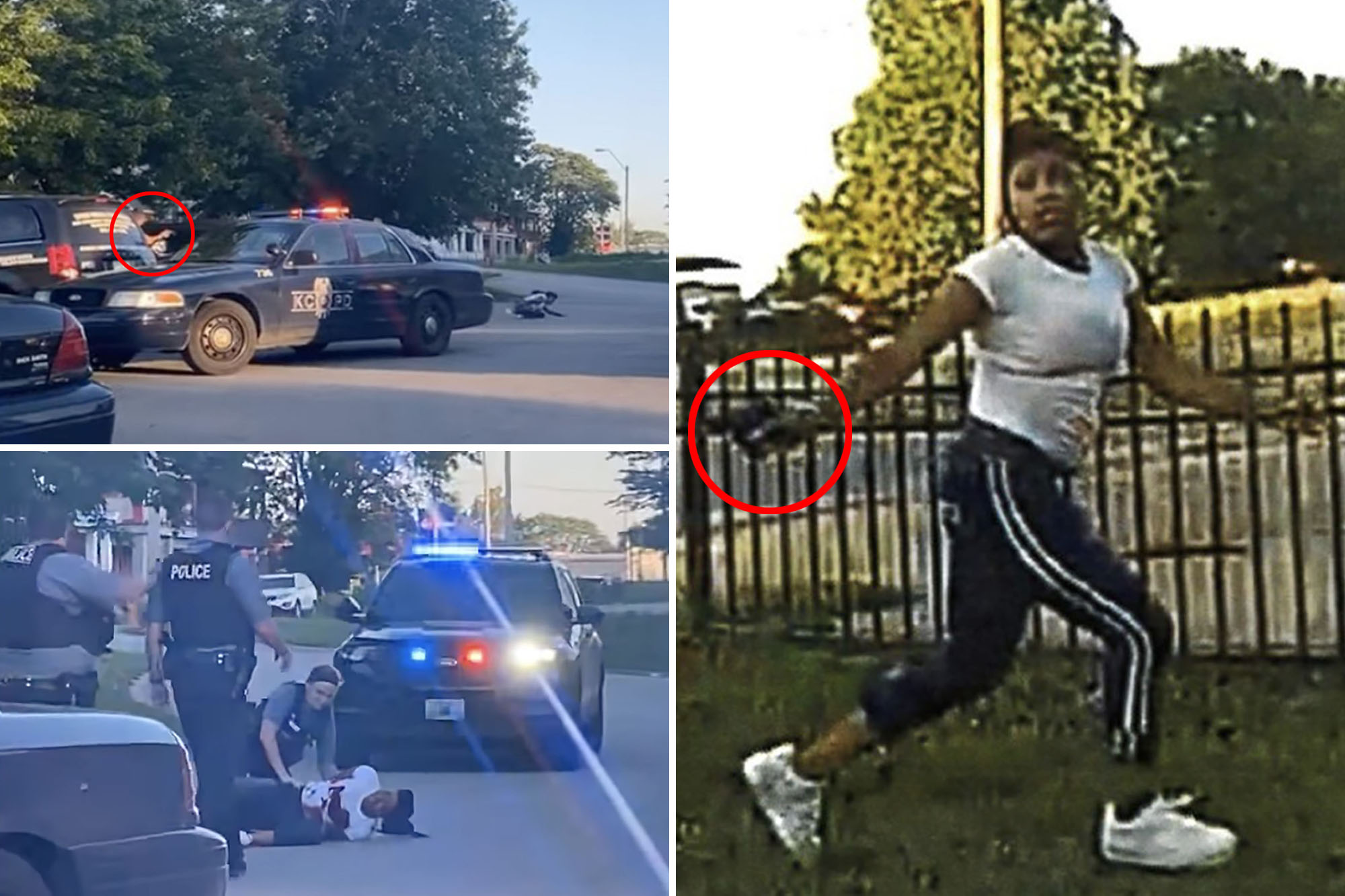 Dramatic bodycam footage caught the moment a suspected armed carjacker — who was falsely believed to be pregnant and unarmed — wielded a handgun moments before she was shot by Missouri cops.

A screenshot released in arrest documents shows Leonna Hale, 26, pointing a handgun as she looks behind her while trying to flee arrest in Kansas City late last Friday, prosecutors said.

Hale, a convicted felon banned from having weapons, pointed the loaded Lorcin L25 handgun straight at two officers — both of who then shot her a total of three times, the Missouri officers said in the warrant.

She then tossed the weapon, which had “one live 22 caliber round in the chamber as well as two live 25 caliber rounds in the magazine,” police said in the warrant. A loaded Glock and 23 rounds were also found in the car she fled, a probable cause statement said.

Hale — whose boyfriend had raced away seconds earlier — was hit with a slew of charges Wednesday, including felonies for unlawful possession and unlawful use of a weapon.

Leonna Hale is seen pointing a gun behind her as she tries to evade arrest.Jackson County Prosecutor

She remains in a local hospital in stable condition, officials said.

An eyewitness, who’d filmed Hale lying in a pool of blood as she was handcuffed, initially told the Kansas City Star that the alleged carjacker had put her hands up to prove she was unarmed at the time. The witness also claimed Hale yelled to cops that she was pregnant.

But Jackson County Prosecutor Jean Peters Baker said surveillance and bodycam footage proved initial reports had been riddled with “false narratives,” including the claim that Hale was pregnant, which prosecutors have said they do not believe is true.

Hale is seen writhing on the ground after being shot.Facebook / Shé Danja

The footage proved that Hale had “continually displayed a weapon during her encounter with police officers and also appeared to be attempting to flee,” Baker said.

“Body camera footage confirms the officers’ statements that Hale was holding a handgun.”

The footage also caught cops “giving Hale additional verbal commands to drop the firearm and Hale is observed to still be pointing the firearm in the victims’ direction,” the warrant alleged.

A police officer is seen in the footage pointing their gun at Hale.Facebook / Shé Danja

One of the officers there said that “she was in fear Hale was going to shoot her and she discharge her firearm one time.”

The other officer initially feared he’d been shot and “discharged his firearm at Hale twice and observed Hale drop the firearm.”

During an initial interview with officers from Missouri Highway Patrol officers — the force investigating the officer-involved shooting — Hale “denied ever having a gun,” the warrant said.

Hale remains in the hospital in stable condition.Faebook / Shé Danja

She requested a lawyer before being quizzed about the footage that appears to clearly show one in her hand, the document said.

The suspect — who has twice been convicted of felony possession of meth, as well as another for interference with a law enforcement officer — was initially cornered after 911 calls about an armed carjacking, the document stated.

Her boyfriend — who was not identified — was busted during a foot chase after fleeing before Hale was shot, the document states.

Hale has denied ever having a gun.Facebook / Shé Danja

In interviews, he claimed that the vehicle they were accused of swiping had actually been willingly given to them by “a white couple for ‘heroin and meth,’” admitting he’d supplied the requested drugs and suggesting the two guns found there had nothing to do with them.

“He stated he nor Hale had firearms in the vehicle and advised he is a felon and not allowed to own or have a firearm,” the warrant stated.

Still, local activists still say Hale is a victim and are demanding the release of the full bodycam footage, not just a screenshot.

Hale is a convicted felon who is banned from having weapons.Facebook / Shé Danja

“She did not deserve to be shot,” Rev. Timothy Hayes told the Kansas City Star.

“We’re not here to argue her innocence that she was not involved in a crime, but we’re here to say that that was not worth her being shot,” he told the local paper.