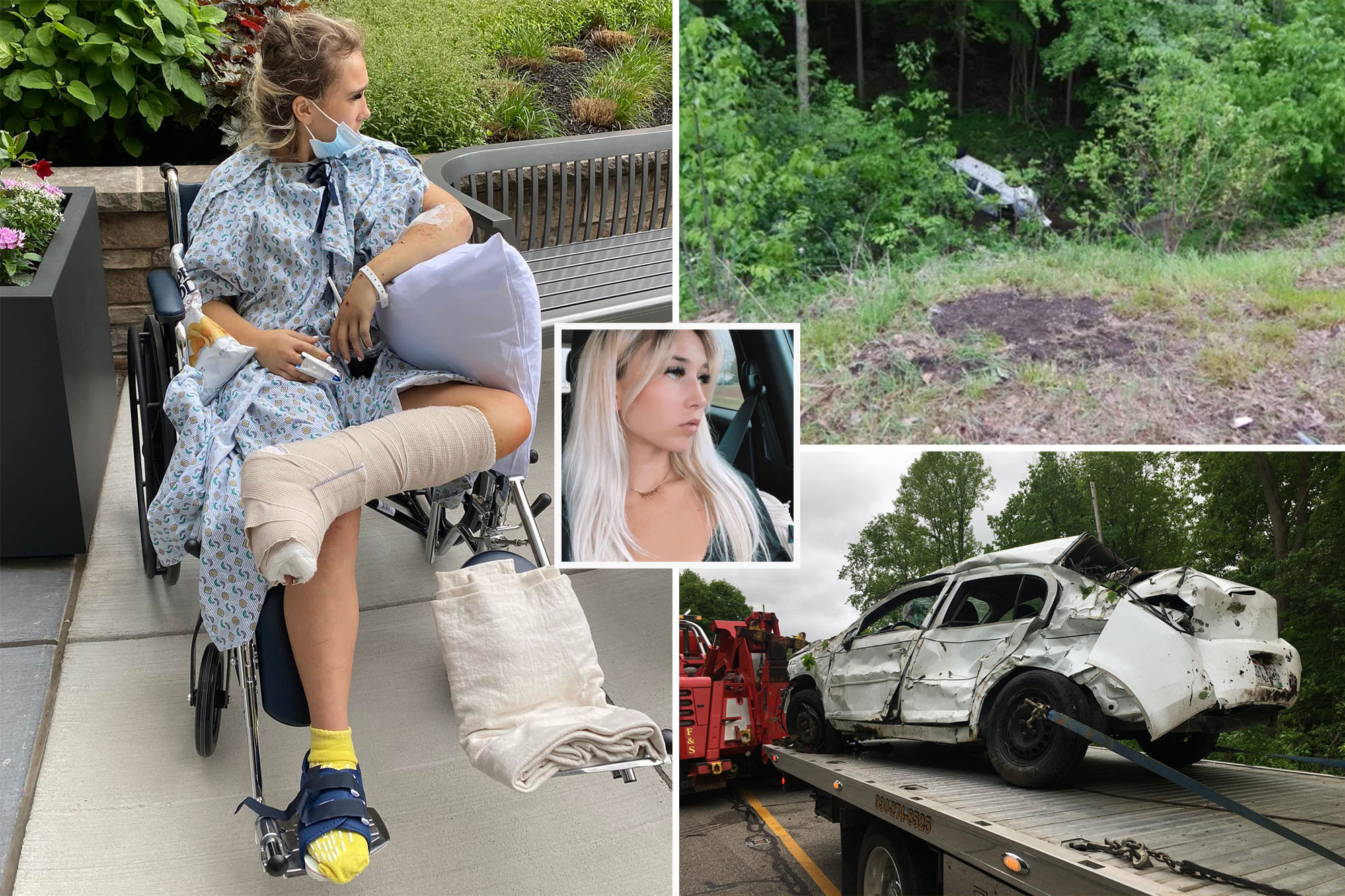 An Ohio woman survived being stuck in her crashed car for nine hours after it hydroplaned off the road and plunged 100-feet down a ravine.

Lexi LaPorte, 21, was driving home through Garrettsville, Ohio in the rain last month when she lost control of her car and crashed through a guardrail. The impact sent her flying through the air into a ravine 100-feet below, WITI-TV reported.

“I go off into the oncoming lane; I go off the road; I hit a street sign; I hit the tip of the guardrail and my car goes airborne,” LaPorte said.

LaPorte’s car rolled over several times on its way down into the ravine. She then found herself with her hand stuck between the door and the front driver’s side seat with the back half of the car submerged in water.

“I wake up, it’s dark. The only light that I had was my vape light,” LaPorte said, adding that she could not locate her cellphone and that her foot and leg were broken along with her toes being “cut off.”

Realizing she was bleeding profusely, LaPorte searched around and found a t-shirt in the backseat to bandage herself.

Lexi LaPorte managed to crawl up a 100-foot ravine after she was badly injured in a car crash. Erin Laporte/Facebook

“I was in shock, like, I wasn’t really freaking out or anything. The adrenaline kicked in,” LaPorte said.

Over the next nine hours, LaPorte says she drifted in and out of consciousness while trying to fight off exhaustion and free her hand.

“After I don’t know, it was a long time. I was doing a bunch of things over the course of these nine hours, trying to just survive, I guess,” LaPorte explained.

Lexi LaPorte lost control of her car after hydroplaning and was pinned inside for nine hours. Ohio State Highway Patrol

LaPorte, fighting through hallucinations, and after realizing help would not be coming for her, was eventually able to kick through her windshield.

LaPorte then successfully freed her hand and crawled out of her car. She found herself badly injured, exhausted, dehydrated, and at the bottom of a 100-foot ravine that she would have to climb out of herself.

Lexi LaPorte’s hand was caught between her car’s front door and the driver’s seat with the back of the car submerged in water. Erin Laporte/Facebook

LaPorte was able to crawl up the ravine despite her severe injuries and eventually made her way up back to the roadway where she says several cars drove by her without stopping to assist her.

“I’m like, please help me. But down the road, I see this guy, he’s outside by his truck. He’s packing stuff up or something, and I’m like ‘Hello! Can you help me?!’ And I wasn’t yelling too loud, I didn’t want to freak him out. I could have screamed a lot louder, but I really didn’t want to freak him out because I know I looked scary,” LaPorte said.

The man and another bystander helped her contact her mother and emergency personnel were on the scene within minutes to take LaPorte to the hospital.

After being transported from the initial hospital to a trauma center in Cleveland, LaPorte was told she had suffered a partially collapsed lung, a gash in her foot, she had lost her big and second toes, suffered a broken leg, and suffered scrapes all over her body.

“A will to live,” LaPorte’s mother, Erin, said. “It’s absolutely crazy, what she went through. I’m so proud of her for being so brave and being able to problem-solve and figure out what she needed to do to get out of that situation and survive.”

LaPorte is scheduled for two surgeries and physical therapy but is expected to make a full recovery and did not suffer any brain damage or internal injuries.