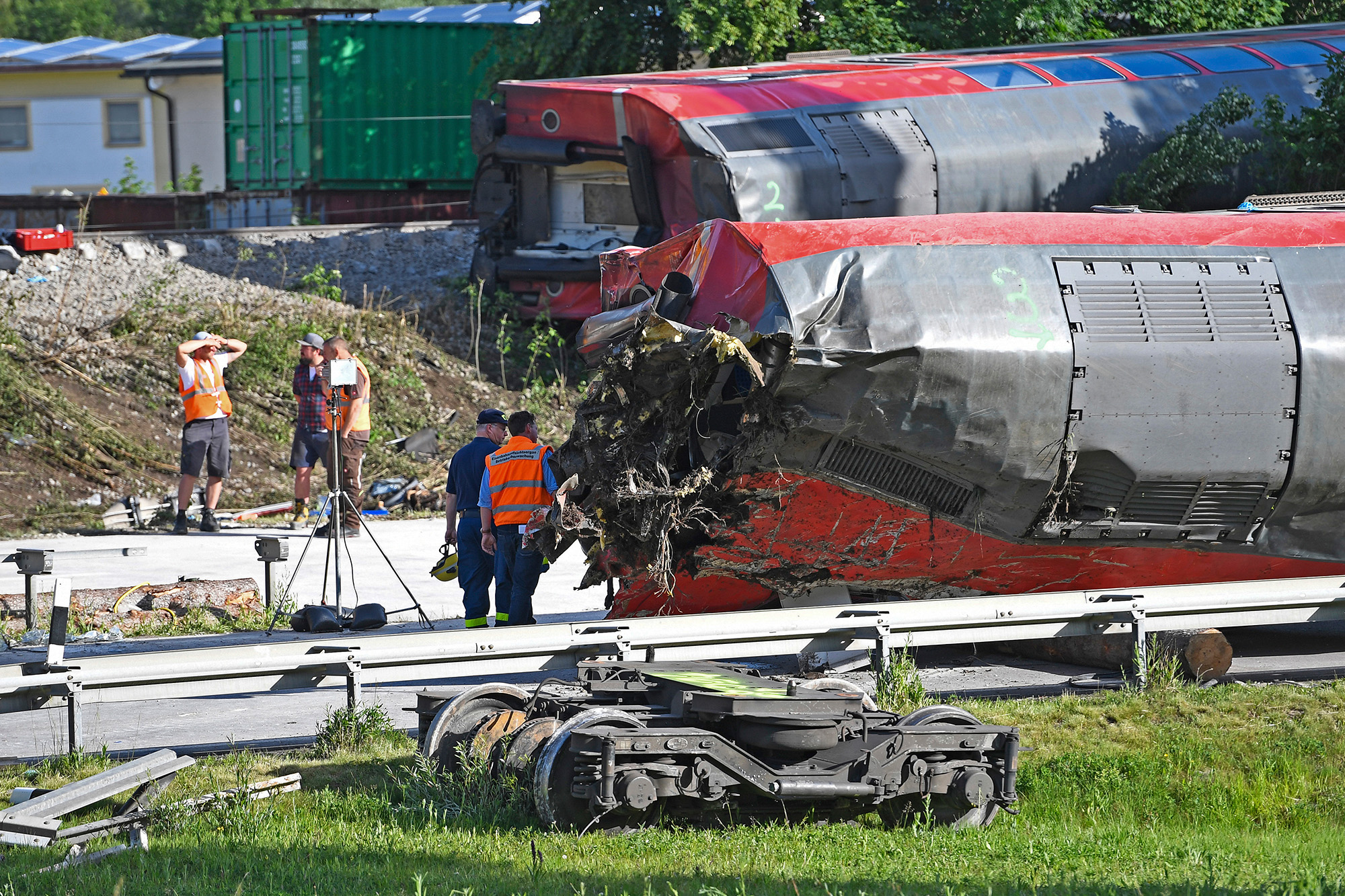 Two Ukrainian women were among those tragically killed in a train crash in Germany.

Five people died and dozens were left injured after the train heading for Munich derailed at about 12:15 p.m. on Friday in Burgrain, near the ski resort town of Garmisch-Partenkirchen.

Four of the victims were reportedly women aged between 32 and 70 – including the two Ukrainian women who had arrived in Germany after fleeing Vladimir Putin’s war.

One of the Ukrainian women’s sons is said to still be in the hospital with serious injuries after the horror crash, BILD reports.

A fifth victim, a man, was found underneath the train on Saturday after initial attempts to lift the derailed carriages failed.

Rescue workers had to wait for a heavy crane to be brought to the site.

“At the moment we do not believe there were further victims, but I cannot yet say for sure,” regional deputy police chief Frank Hellwig told reporters.

Footage from the scene showed crumpled double-decker carriages on their side with debris strewn across the tracks as stunned passengers clambered out of smashed windows with their suitcases.

Two Ukrainian women, who had arrived in Germany after fleeing Vladimir Putin’s war, died in the collision.Sven Hoppe/dpa via AP

Rescue workers scrambled to find survivors in the carnage with firefighters forced to chop down trees to access the wreckage.

According to reports, there were 140 passengers on board at the time of the derailment.

At least 44 people were left wounded – including children – and 15 were rushed to hospital with serious injuries, police said.

Many schoolchildren were on board the train after breaking up for the holidays on Friday.

One of the Ukrainian women’s sons is said to still be in the hospital with serious injuries.Angelika Warmuth/dpa via AP

Stefan Sonntag of Upper Bavaria’s police force said the train was “very crowded and many people were using it, hence the high number of injured.”

The cause of the derailment was not immediately clear, but prosecutors and police have launched an investigation, cops said.

Investigators have reportedly ruled out a collision with another train or a vehicle.

Bavaria’s Transport Minister Christian Bernreiter said: “On site, all the experts were of the opinion that the most likely cause should be a technical defect on the track or on the train.”

The mountain resort of Garmisch-Partenkirchen and its surrounding regions are currently gearing up to host the G7 summit of world leaders later this month.

From June 26 to 28, the heads of state and government, including US President Joe Biden, are due to meet at Schloss Elmau – about seven miles from Garmisch-Partenkirchen.

Cops and soldiers who had been deployed to secure the site ahead of the summit were diverted to help in the rescue operation.

Three helicopters from Austria’s Tyrol region also raced to the scene, according to reports.

Investigators have reportedly ruled out a collision with another train or a vehicle.Uwe Lein/dpa via AP

An American soldier who witnessed the crash from a nearby road said the scene was “just awful”.

He told the Garmisch Partenkirchner Tagblatt: “It was terrible. Just awful. Suddenly the train overturned.”

An elderly passenger who survived the crash after rescue workers smashed a window and dragged him out said “there was a lot of rumbling and then there was dust”.

A firefighter described the crash scene as “brutal.”

At least 44 people were left wounded and 15 were rushed to hospital with serious injuries.Uwe Lein/dpa via AP

Part of the route between Munich and Garmisch-Partenkirchen was blocked off and traffic diverted, German rail operator Deutsche Bahn said.

The most recent fatal crash took place on February 14 this year when one person was killed and 14 others injured in a crash between two local trains near Munich.

In 2017, a collision between a passenger train and a stationary freight train near the western city of Duesseldorf injured 41 people.

This story originally appeared on The Sun and was reproduced here with permission.

Woman stole $288,000 from couple in their 90s, paid for Broward home, wedding reception

I took my first Caribbean cruise, and quickly learned that cruising is a lifestyle that’s not for me

Woman stole $288,000 from couple in their 90s, paid for Broward home, wedding reception

I took my first Caribbean cruise, and quickly learned that cruising is a lifestyle that’s not for me