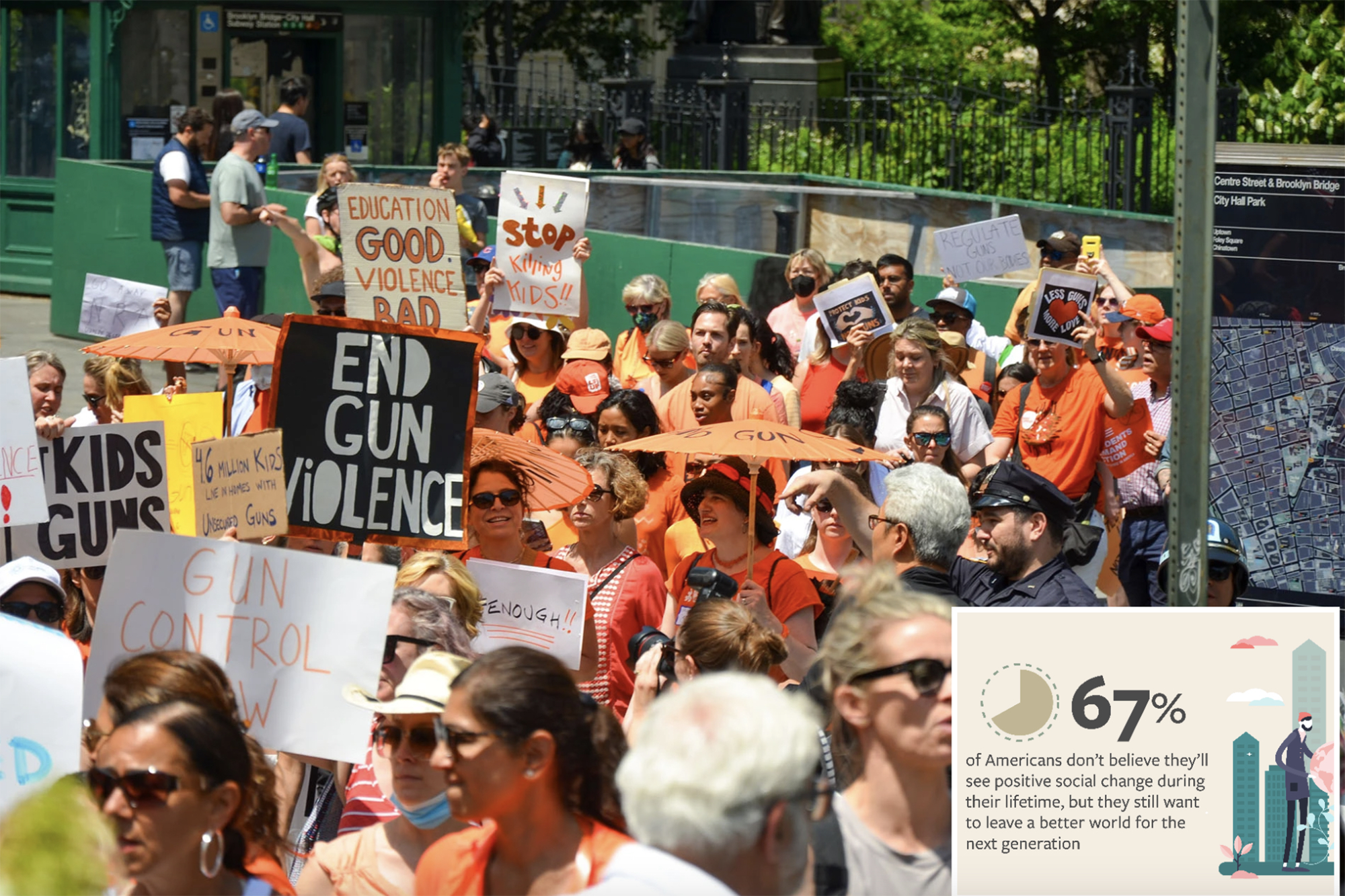 Most Americans actually are concerned about social issues such as health care, gun violence and reproductive rights — but they’ve given up hope for progress, according to a new poll.

Out of the 2,000 Americans surveyed, nearly 67% are not optimistic that there will be any positive change in their lifetime, according to OnePoll.

Of the issues discussed, health care (43%) and gun violence (41%) topped the list as primary concerns. Domestic violence (39%) and racial injustice (39%) tied as the third biggest issues, with poverty (38%) and the homeless crisis (38%) filling spots four and five.

OnePoll — which conducted the survey on behalf of Avocado Green Mattress — reported that 66% of respondents said reproductive rights are currently a higher priority, as the survey coincided with the US Supreme Court overturning Roe v. Wade.

About 64% of people surveyed also said that current events and those shown on the news are of great importance.

Due to recent mass shootings, nearly 59% of people have said that gun violence is a higher priority to them than anything else.

The top five issues that were found to be on the minds of Americans were health care, gun violence, poverty, racial justice and domestic violence.

Anti-transgender legislature in several states has prompted 43% of people to say that they are now focusing on LGBTQ+ issues, researchers said.

“These issues are big and daunting, with no easy solutions,” Mark Abrials, Avocado Green co-founder and CFO, told SWNS and Talker News. “But we also know that our collective individual, small actions can add up to a really big positive impact.”

However, Abrials did note that the percentages could fluctuate in the future due to the ever-changing world and the often-shifting views of the general public.

The survey also asked exactly how responders were taking action to affect change.

A large portion of those surveyed (45%) said that they would go so far as to boycott brands or companies who donate to causes that do not align with their ideals, while 43% said they are standing up for social causes by calling out family and friends when they disagree with them.

Some 45% of respondents said they are actively researching political candidates — to ensure they support only those who align with their ideals — while 43% said they are standing up for social issues they believe in by calling out loved ones who espouse beliefs they don’t agree with.

A startling 67% of Americans believe that they will not see change in their lifetime.

Respondents — 42% of them — also reported taking action by voting and by educating themselves on these issues.

Even then, 72% said that to create real social change, Americans need more than just individuals involved in the process. Those respondents argued we also need involvement from the federal government (58%), local governments (57%) and local action groups (55%).

“We know what’s on the line, and that we all must do our part,” said Abrials. “That’s why we believe our business should be a force for good. We want people to care and get involved by becoming educated on issues, challenging misconceptions, supporting brands that champion their values, and, above all, by voting and calling their elected officials.”

Boycotting brands/companies who donate to groups and/or support legislation they disagree with — 45%Ensuring the candidates they vote for are aligned with their ideals — 45%Calling out loved ones when they say things respondents disagree with (for example, homophobic friends) — 43%Voting — 42% (tied)Educating themselves on these issues — 42% (tied)Using social media to discuss issues — 39%Donating money — 38%Signing petitions — 38%Attending rallies and/or protests — 36%Volunteering with affected groups — 35%

Soldiers take rocket launcher out of hiding and fire at Russians