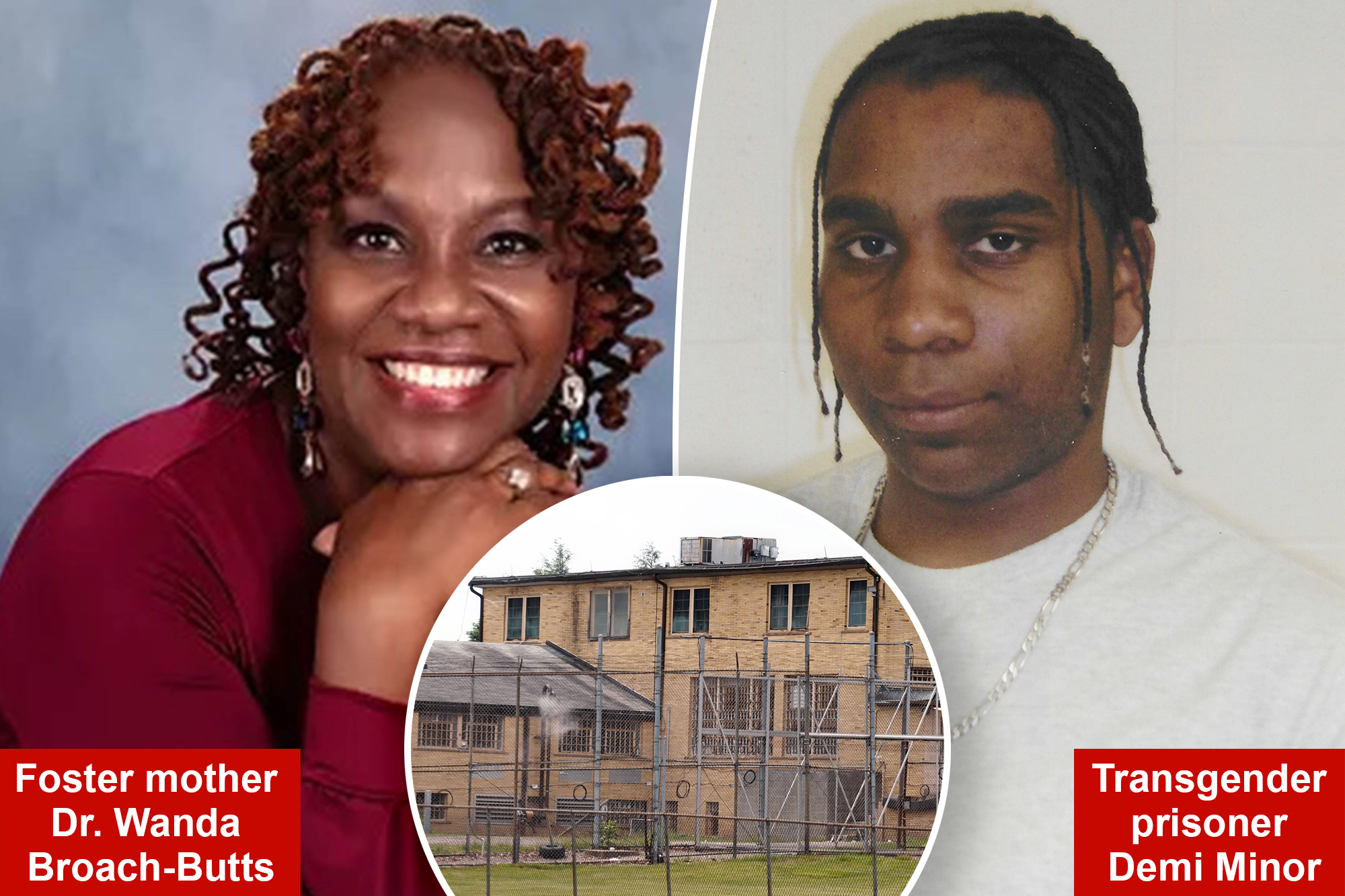 Depending on who you ask, the 27-year-old inmate who impregnated two women in a New Jersey prison earlier this year is either a martyr to the transgender cause — or a cold-blooded killer who got involved in a messy love triangle behind bars.

Demi Minor, as a troubled foster kid — then called Demetrius — had a record for burglaries and at least one carjacking at gunpoint before brutally stabbing foster father Theotis “Ted” Butts 27 times in 2011 at age 16.

“It was the worst murder scene I have ever seen,” Brad Wertheimer, one of Minor’s defense lawyers in 2011, told The Post. “There was blood everywhere. The community was outraged. The [foster] dad was considered a great guy, an angel.”

But Demetrius is now Demi, a transgender woman activist fighting to be returned to a women’s prison after being removed from the state’s lone facility for females in June when it was discovered she had impregnated two other inmates. She was sent to a lock-up where she is the only person identifying as female. Her legal team is fighting for her transfer under a new and controversial state policy enabling inmates to be housed according to their preferred gender identity.

Demi Minor, who was convicted of killing her foster father as well as impregnating a pair of female prisoners, wants to be returned to a women’s prison after being removed in June. Twitter

Demi is also now an advocate for “juvenile justice” with an elaborate social media presence and a team of advocates who’ve backed her since 2020.

“She’s a force to be reckoned with, a triumph,” her new lawyer, Derek Demeri, an advocate for the LGBTQ community, told The Post. “I admire her ability to navigate the system. She’s pretty level-headed and has risen above a lot.”

But Minor’s former foster mother, Dr. Wanda Broach-Butts, whose husband was slain by Minor, said she believes Minor is a manipulative “psychopath” using transgenderism as a ruse to get special treatment and attention in jail. She said she worries for the female inmates if Minor is returned to a women’s prison.

“I think all this about him being transgender is a ploy,” she told The Post. “He’s manipulating people to get a better situation for himself and to get attention. He’s learned the language to use. He’s dangerous and he’s a psychopath.”

Minor’s former foster mother Wanda Broach-Butts believes that Minor is a “psychopath” who is exploiting her transgender status in order to get special treatment and attention.

Minor, who’s serving a 30-year sentence for manslaughter and carjacking, was moved two months ago from the Edna Mahan Correctional Facility for Women to the Garden State Youth Correctional Facility — a prison for young adults in Burlington County, according to a New Jersey Department of Corrections spokesman. State prison policy forbids sex between inmates.

The two women’s pregnancies were discovered in April after other inmates at Edna Mahan sent letters to several media outlets complaining about the housing of pre-op transgender prisoners at the facility. Minor was one of about 27 transgender inmates first moved to Edna Mahan after a new “gender self-ID” policy was enacted in New Jersey last year. This policy was sponsored by the ACLU along with Garden State Equality, which is openly financed in part by George Soros’ Open Society Foundations. Minor’s attorney Demeri used to work for the NJ ACLU as well as for the Red Umbrella Alliance, an advocacy group for sex workers that is partially funded by Soros, and wouldn’t confirm whether or not he is working for Minor pro bono.

Convicted double murderer Latonia Bellamy is one of two female prisoners Minor impregnated. The baby is due in the fall.EJA

Minor is now in a “vulnerable” housing unit in the youth facility where she is the only woman and has extra protection, her spokesman said.

It was initially reported by DOC officials that Minor had impregnated two inmates after engaging in “consensual sexual relationships” at Edna Mahan. One of the women is Latonia Bellamy, a convicted double-murderer, who is in a relationship with Minor and due to give birth this fall. She was convicted, along with her female cousin and one man, in the carjacking-related homicides of a newly-engaged couple in Jersey City in 2010.

Minor was being held at the Edna Mahan Correctional Facility for Women in Union Township, NJ.AP

Demeri told The Post this week that the other relationship was “coerced” on Minor.

“One was absolutely consensual,” said Demeri. “But in the other case, Demi was a victim of coercion.” Demeri said that the second woman, who was jealous of Bellamy, snuck into Minor’s cell and threatened her into having sex, saying “I’ll beat your bitch up.”

Even so, “Demi doesn’t classify it as rape. The Dept. of Corrections knew it wasn’t totally consensual,” said Demeri.

After the encounter, the woman — who has not been identified — got pregnant but had it terminated, several sources told The Post.

In addition to Demeri, Minor’s other supporters include a notorious former professor at the John Jay College of Criminal Justice, Mike Isaacson, who identifies as a member of Antifa, co-founded the anti-white supremacy group Smash Racism in Washington DC, and once referred to dead police officers as “pig death stats.” (Isaacson later apologized for his comments, saying he regretted making “the John Jay community … the target of death threats and harassment,” adding, “so much for free speech.”)

Minor’s lawyer Derek Demeri calls her a “force to be reckoned with” and admires her “ability to navigate the system.”Sameer A. Khan

Isaacson and Minor’s other backers see the inmate as a victim of the foster care system and of a prison system that discriminates against black trans women.

“Justice for Demi was founded as a juvenile justice and LGBT2SQAI+ rights organization seeking structural changes to remediate the injustices Demi faced throughout her life as a black trans female with … an awful experience in the foster and criminal punishment systems,” a Justice 4 Demi spokesman told The Post.

But Broach-Butts, 63, is skeptical about Minor’s crusade and her real motives.

Broach-Butts, who fostered seven boys total with her husband, is a professor of nursing who also spent years overseeing some mental health programs in the state prison system.

She wrote a book about her ordeal that was published last fall, “The Ice Underneath: My Passage Through Loss and Faith,” in which she writes about forgiving Minor and trying to move on with her life.

At the same time, she worries about Minor’s push to be returned to a women’s prison.

“It’s not a good idea, especially for the female inmates,” she said.

Broach-Butts said she was initially so traumatized by the murder of her husband in July 2011 that it was only her strong religious faith that enabled her to go on.

“My husband was stabbed from his chin to his ankle,” she said.

But she recovered enough, she said, to formally address Minor in court during the manslaughter case and forgive her foster child.

“He didn’t say a word back to me,” she recalled. “There was no remorse, just a total flat affect, like a psychopath.”

The final resting place of Minor’s foster father Theotis “Ted” Butts, who the convict stabbed to death. “My husband was stabbed from his chin to his ankle,” said his widow, Wanda, who was also Minor’s foster mother.

Broach-Butts, like several others who knew Minor a decade ago, said they never saw any instance of gender dysphoria or transgenderism in her youth.

“He was angry at gay people when I knew him,” Broach-Butts said.

Minor’s uncle, Tyrone Wright, said he hasn’t seen Minor since she went to prison but he never saw any gender dysphoria in his nephew. He does not believe Minor is truly transgender.

“If I were incarcerated for any reason and was going to have to do a lot of time, I’d do everything I could to make it easier, you know what I’m saying?” Wright said. “I call bulls–t on this.”

Minor was 16 when arrested for Ted Butts’ murder.

Minor has a complicated background. Her biological mother, Michelle Minor, was stabbed to death in Oct. 2004 in a still-unsolved murder years ago in the Bridgeton, NJ, area. Her biological father, Allahdjinn Wright, is a New Jersey minister and certified drug and alcohol counselor for the Department of Corrections who was arrested in March on charges of sexually assaulting a teen girl he was supposed to help. (Wright remains free pending trial on those charges.

Demi was 14 and called Demetrius when the Butts family took her in. Her former foster mother had warned Minor’s new parents that the youth had problems. Butts said the then-teen was not physically violent with them in the home but had to be removed after numerous instances of difficult behavior, including stealing. Minor was reportedly confronted by her foster father when she broke into the Butts’ house in July 2011 and then stabbed him.

On her website, Minor complains in numerous blog posts about being repeatedly “misgendered” and said she’s been suicidal over losing her rights as a trans woman.

Minor is now being housed in the Garden State Youth Correctional Facility in Chesterfield Township, NJ.

In a July 15 blog post, Minor wrote that she was placed on suicide watch at the new facility “due to the fact that I had hung myself in the van.” She claimed guards denied her request to be strip-searched by a female DOC officer.

“[NJDOC] have violated my right to be safe and free from sexual harassment, by putting me in one of the most violent youth Correctional facilities,” Minor wrote. “While living here at GYSC, I have found my self (sic) under attack by young inmates who are immature and just plain ignorant towards a person like me.”

Minor also lamented the fact that she has been separated from the mother of her baby.

“Demi is very afraid for her life and safety,” Demeri told The Post this week. “Her gender dysphoria is aggravated. Her gender identity is not acknowledged and is affecting her mental health.”