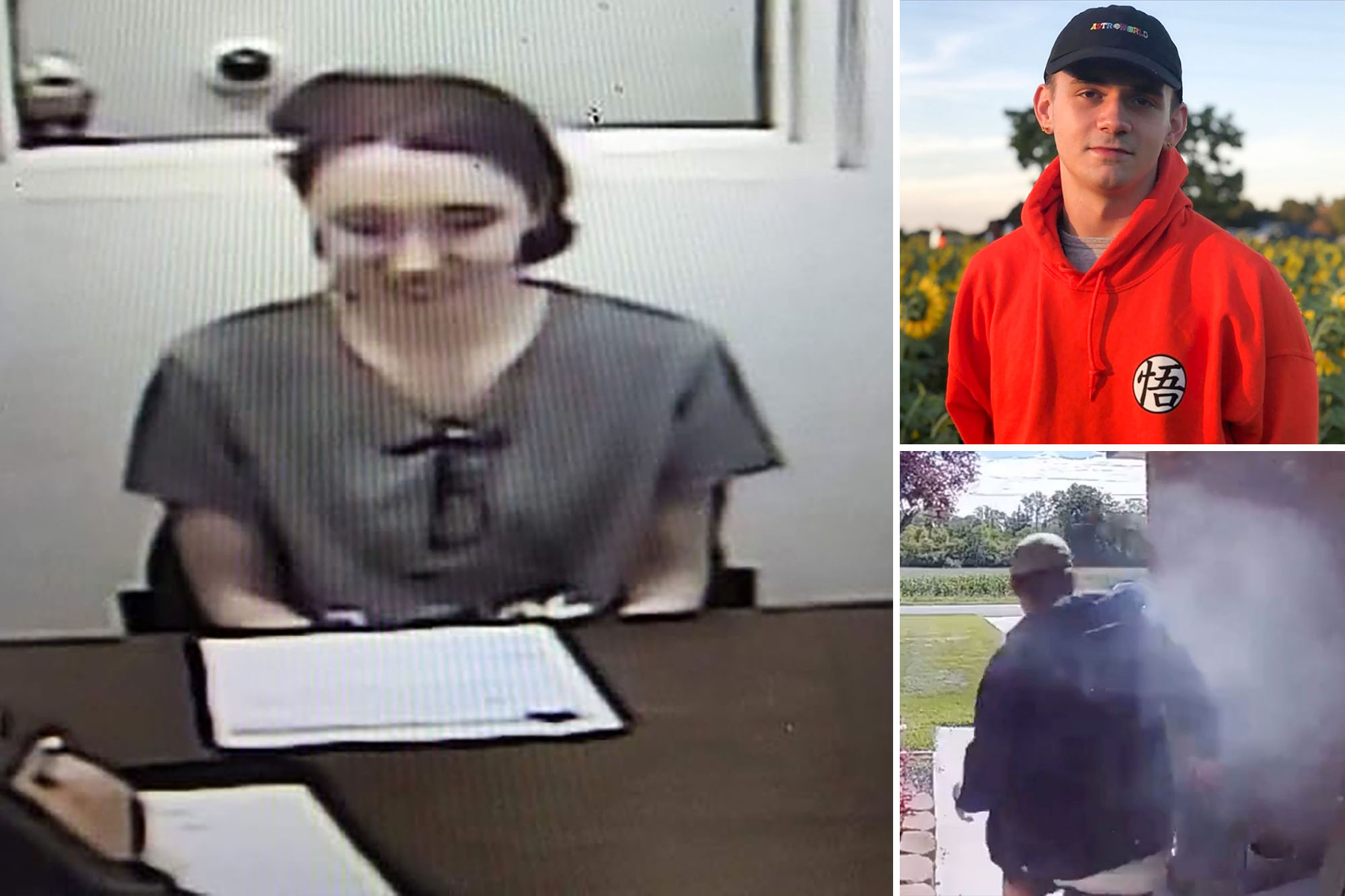 The Ohio woman whose ex-boyfriend was gunned down by her dad — a moment caught on chilling Ring doorbell footage — told cops the fatal victim was verbally abusive and “changed” after they broke up.

James Rayl, 22, died from a gunshot wound to the back after attempting to force his way into the Sydney, Ohio, home of 52-year-old Mitchell Duckro on July 31, as seen in the viral video.

During a videotaped interview with police detectives after the shooting, first obtained by Daily Mail, Allyson Duckro explained that she and Rayl had previously been in a relationship but split up in 2019 because she said he was “just being a d—” and would tell her “everything that was wrong with me.”

She added, “He would say that no one was going to love me anymore.”

Following the couple’s breakup, Allyson told the police that she blocked Rayl on social media.

Allyson Duckro, 22, is pictured talking to police detectives about her ex-boyfriend James Rayl’s shooting death at the hands of her father. Facebook / Justice for James Ray

Rayl, 22, died after being shot three times, including once in the back, by Mitchell Duckro in Ohio.Facebook / Justice for James Ray

The 22-year-old woman said that at one point, Rayl had relocated to California, but when he returned to Ohio, “he was just different.”

“His close friends … he just started treating like crap and nobody wanted to deal with it,” Allyson claimed.

According to the woman, she and Rayl would take acid while they were dating, but she said she did not know if he was still using illicit drugs around the time of his death, because she had not been in contact with him.

Allyson also recounted the events that immediately preceded the bloodshed.

A Ring doorbell camera shows Rayl trying to force his way into the Duckro family’s home in Sydney, Ohio, on July 31.Twitter/@Tr00peRR – RING.com

The homeowner fires three shots through a window, striking Rayl in his arms and back.Twitter/@Tr00peRR – RING.com

She said that when she saw the glass on the front door break and the doorframe give way as Rayl was ramming it with his shoulder, she “freaked out and ran and hid.”

“I didn’t even see when [Mitchell Duckro] shot or anything, I just heard it,” the daughter recalled. “I literally hid most of the time. I screamed a bunch, and then I really started freaking out.”

The night before the shooting, Rayl had left a voicemail for Allyson, which was released earlier this month by the man’s sister, who has been leading a campaign demanding justice for her brother.

“Hi Ally, it’s James,” Rayl says softly on the recording. “I just wanted to reach out to you because I just wanted to see how you’re doing, and maybe hear from you, if that would be all right, I guess.

Allyson told cops she and Rayl had broken up in 2019, and that he had “changed” following his temporary move to California. Facebook / Justice for James Ray

A grand jury this month voted against indicting Duckro for Rayl’s killing.

“It’s been a while since I’ve talked to you and I don’t know, I feel like, I don’t know what I feel.”

Allyson and her family claimed she was scared after hearing her ex-boyfriend’s message.

In a 911 audio recording from the day of the shooting, which has been obtained by WHIO-TV 7, Allyson is heard telling her father that Rayl is trying to break down the door.

The Ring video shows the man standing on the Duckro family’s front porch and repeatedly slamming his body against the door after being told by her father to go away. At one point, Mitchell Duckro warns the unwelcome guest that he is armed.

“Dad, is he trying to kill me?” Allyson could be heard saying on the 911 call.

Rayl’s loved ones, led by his sister, have been waging a campaign demanding justice for him. Facebook / Justice for James Ray

After Duckro shoots at Rayl three times, leaving him for dead in a walkway outside the house, his daughter is heard telling him, “Dad, there’s nothing you could have done. You saved my life,” according to the station.

During an interview with the police after the fact, Allyson’s mother, Stacie Duckro, tearfully said her daughter was “terrified” as she watched Rayl trying to break into their home.

“He tried to get my daughter,” the mom argued.

But she also spared a thought for the deceased man and his loved ones, saying, “I can’t imagine what his parents are going through.”

Haberman: This is what GOP is learning about abortion rights during midterms

When Russia and Ukraine eventually restart peace talks, involving women – or not – could be a key factor in an agreement actually sticking