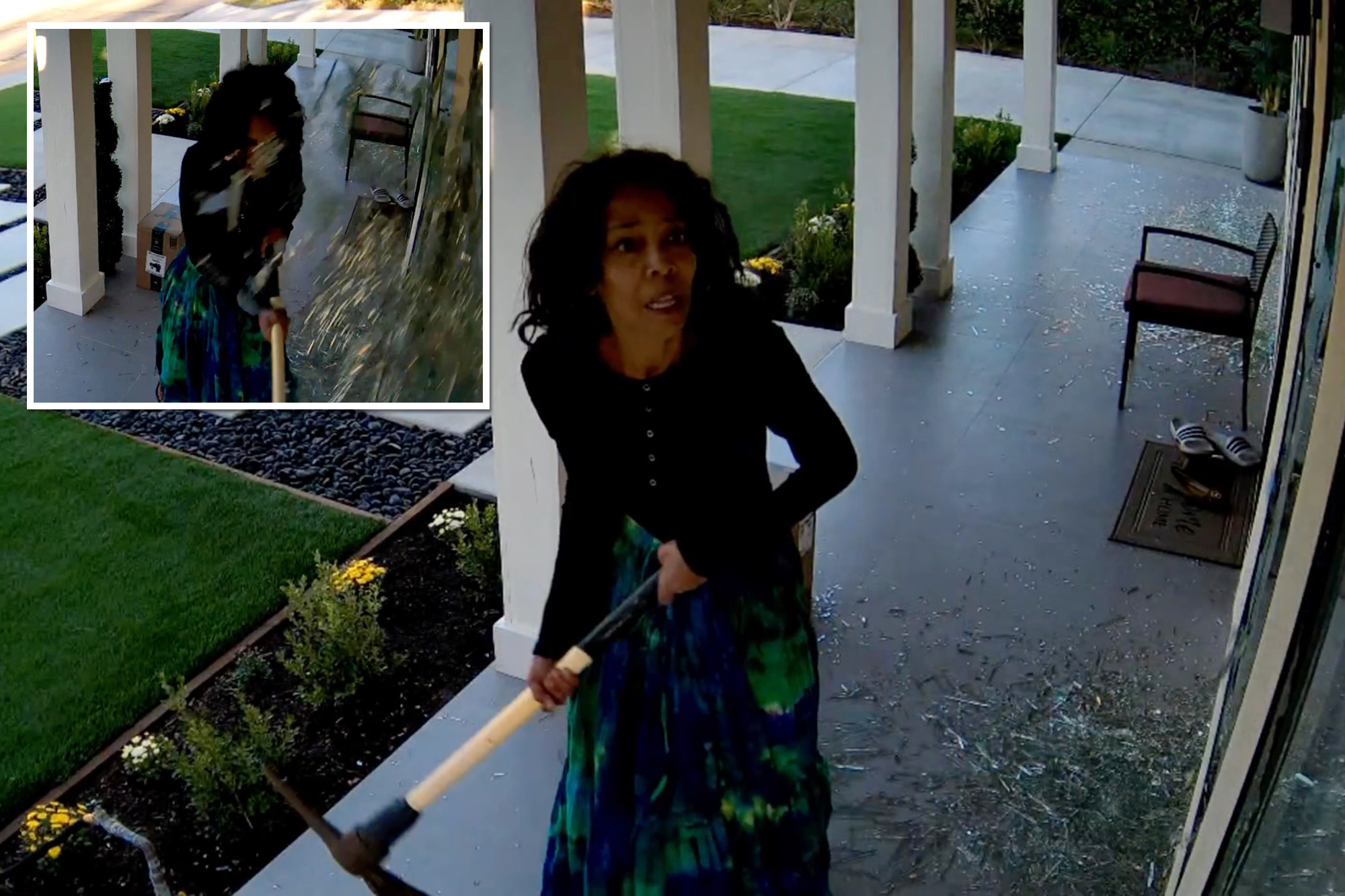 Terrifying security camera video caught the moment a woman used a pickax to smash several windows of a California home – where a grandmother was babysitting a newborn just inches away.

The woman, wearing a long gown and wielding the tool, is seen marching up to the home on Asbury Drive in Pasadena on Monday and smashing a window in an unprovoked attack, the video posted by KTLA shows.

The grandmother is heard shrieking.

The unhinged attacker walks off with the pickax slung over her shoulder and yells, “Questions? Questions? I’ll be back! Get out!”

She then returns brazenly and unleashes several more strikes that break more windows.

Homeowner Arman Tchoukadarian told KTLA his mother-in-law was watching his baby daughter, who was sleeping in a bassinet near a front window at the time of the attack.

The grandmother managed to remove the child from under the first window struck in the nick of time, he said.

A California woman was caught on camera smashing several home windows using a pickax, just inches away from a newborn baby. Arman Tchoukadarian

“If my mother-in-law didn’t act as fast as she did, my daughter wouldn’t be here,” Tchoukadarian told the station.

“She broke one window, went back,” he said of the woman outside. “My mother-in-law came out screaming and yelling to get my attention.”

Police caught up with the woman — identified as 65-year-old Beverly Baker — at her nearby home on Casa Grande Street, where she refused to surrender for about 30 minutes before being arrested on felony charges of vandalism, KTLA reported.

A 65-year-old woman was seen wearing a long gown, marching up to the home on Asbury Drive in Pasadena on Monday.

Police said she may be suffering from a mental illness, though that has not been confirmed.
Arman Tchoukadarian

Police found her “nonchalant, walking with a pickax on her back like she’d just finished working with it,” Tchoukadarian told the news outlet.

Police said she may be suffering from a mental illness, though that has not been confirmed.

Police caught up with the woman, identified as Beverly Baker, and arrested her on felony charges of vandalism. Arman Tchoukadarian

Tchoukadarian said the family does not know who the woman is, other than that she lives nearby, news station KCAL reported.

He estimated the damage at the home in the city northeast of downtown Los Angeles at about $20,000.

Recent crime statistics show several major US cities, including Los Angeles, are on track to surpass last year’s already shocking rates of violent crime. Over the past year, the number of homicides in the city has spiked by 7%.