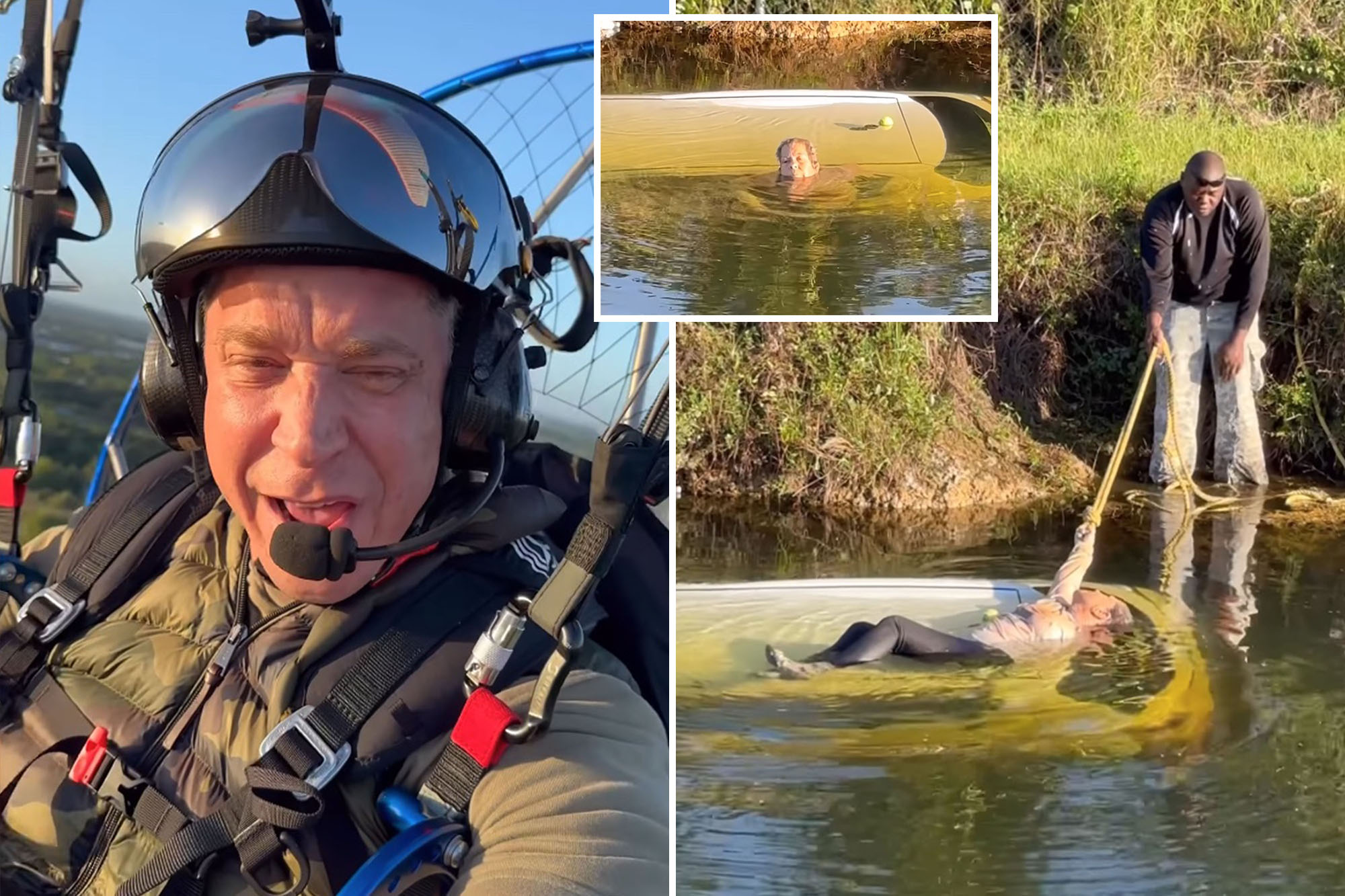 Dramatic video captures the moment a Florida paraglider swoops in to help rescue a woman clinging to the roof of her submerged vehicle in a canal — as an alligator swims nearby.

Cristiano Piquet, a Miami real estate agent, was flying his motorized rig above the waterway near Homestead on Sunday morning when he noticed the alligator, the Miami Herald reported.

“I turned around to get a shot of the alligator, and I saw a car under the water. I flew closer to the car and I saw a woman on top,” the 40-year-old man told the newspaper.

His GoPro camera shows Piquet landing in a nearby field and running over to the woman.

“You need help?” he shouts.

Cristiano Piquet, 40, landed his motorized glider and ran over to help rescue the woman from her submerged car.Instagram / @cristianopiquet

“Oh my God! I fell with my car in here,” she replies in anguish as she holds onto to the partially submerged yellow car.

“Oh my God! I fell with my car in here!” the women shouted when she saw the pilot.Instagram / @cristianopiquet

A nearby resident pulls the exhausted woman to safety after she landed in the canal.Instagram / @cristianopiquet

Piquet, who had been flying with a friend, told the Herald that he got help from a nearby resident who used a rope to pull the woman to safety.

“So we threw her a rope, and she was free, she was alive,” he told WSVN. “Everything happened so fast, and after we got her to safety, we called 911.”

The recreational pilot told NBC Miami: “I think God told me, ‘My friend, land and save that one life.’ We landed between power lines and uneven terrain…it was a terrible landing situation. For some reason, I was calm.”

A good Samaritan used a rope to pull the woman to safety after her car landed in the canal near Homestead.
Instagram / @cristianopiquet

The woman was taken to a hospital with injuries that were not considered life-threatening.
Instagram / @cristianopiquet

Piquet captured the emotional moment the woman and her rescuer embraced after her harrowing experience.
Instagram / @cristianopiquet

“God cares about her life because he put me in that moment, that perfect moment, on that day,” Piquet told
Instagram / @cristianopiquet

He also caught the emotional moment the woman and her rescuer embraced on the other side of the canal.

Soon after, six Miami-Dade Fire Department vehicles responded to the scene near the 20400 block of Southwest 192nd Street at 8:35 a.m., the paper reported.

First responders searched the area to make sure no one else was in the water and took the woman — who has not been identified — to the hospital.

She was treated for injuries that were not life-threatening, officials said.

The cause of the accident remains under investigation.

Piquet said he was happy to have missed church to help save the woman’s life.

“For some reason I was better suited being there at the right place and the right time,” he told the Herald.

“God cares about her life because he put me in that moment, that perfect moment, on that day,” Piquet told NBC Miami. “Maybe I would have flown somewhere else.”