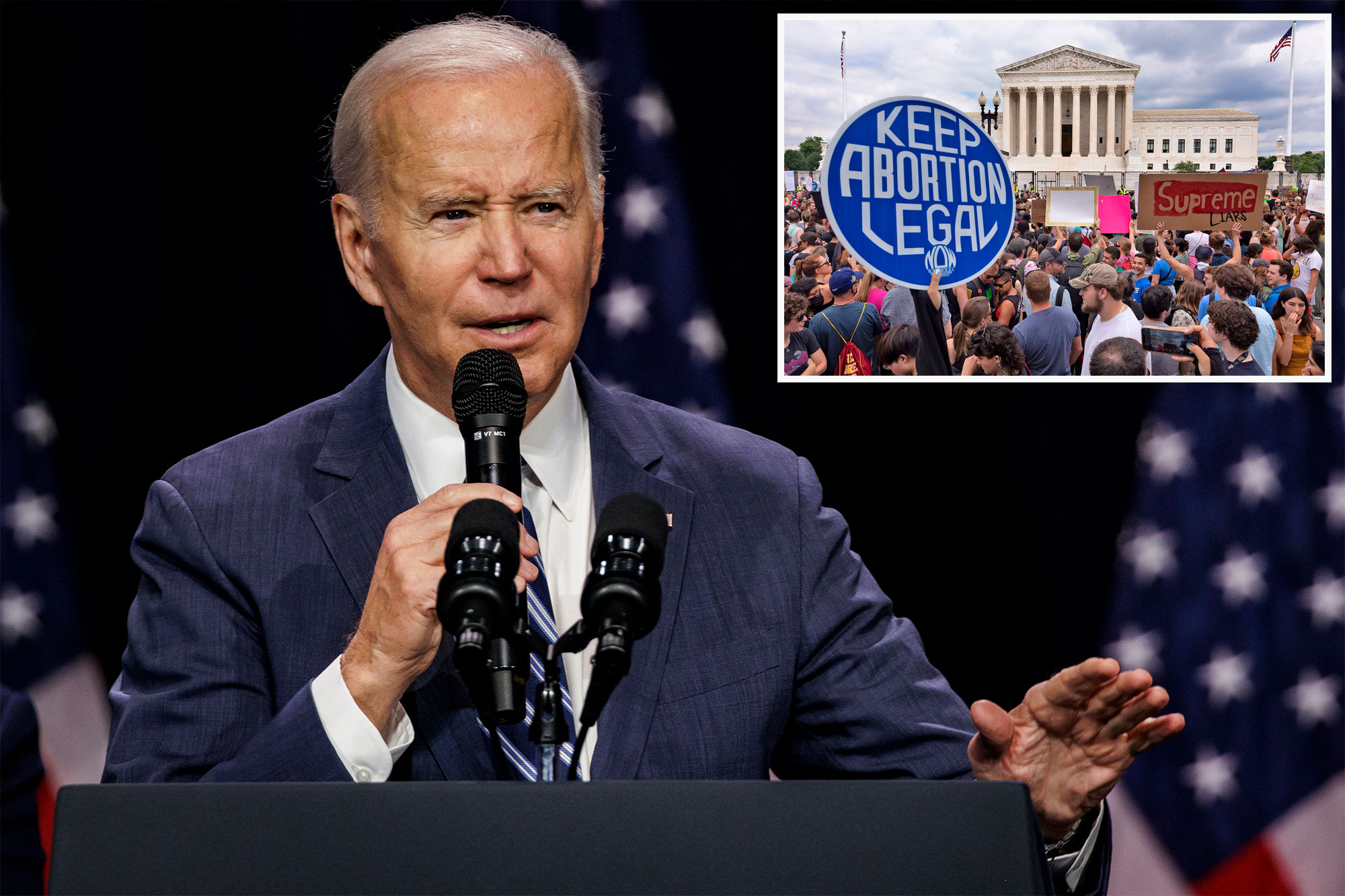 President Biden said Thursday that women angered by the overturn of Roe v. Wade “beat the hell out of” Supreme Court justices in the midterm elections — after Vice President Kamala Harris crowed that stronger-than-expected showings by Democrats proved “our democracy is intact.”

“I said last year that one of the most extraordinary things about the Dobbs decision is what was about to challenge American women, when the justices said they have it in their power to — basically saying, ‘let’s see what they’re gonna do’,” Biden said.

“Well guess what?” the president said. “You all showed up and beat the hell out of them.”

Biden analogized the election to a physical beat-down of jurists after months of protests outside the Washington-area homes of the five judges who voted to return abortion policy to states, some of which proceeded to all but ban the procedure.

President Biden claimed that women “beat the hell out” of the Supreme Court in the midterm elections this year.Photo by Samuel Corum/Getty Images

A 26-year-old from California, Nicholas Roske, was arrested in June outside the home of Justice Brett Kavanaugh after calling 911 to say he was armed with a gun and that “I need psychiatric help.”

Roske, who was charged with attempted murder, traveled to Kavanaugh’s home after protesters published the address online in May as part of a pressure campaign that followed the publication of a leaked draft opinion overturning Roe.

The majority opinion in the abortion case, by Justice Samuel Alito, said that women have the political power to determine the extent of abortion rights in their states.

“Our decision returns the issue of abortion to those legislative bodies, and it allows women on both sides of the abortion issue to seek to affect the legislative process by influencing public opinion, lobbying legislators, voting, and running for office,” Alito wrote in Dobbs v. Jackson Women’s Health Organization. “Women are not without electoral or political power.”

Democrats out performed expectations at the midterm elections on Tuesday.
Photo by Samuel Corum/Getty Images

Biden also vowed at his Thursday celebration to use his veto powers to block any attempted Republican rollback of legislation passed during his first two years in office.

Control of both chambers of Congress remained undetermined Thursday night due to slow vote-counting in several Western states. Republicans currently lead in enough House races to gain a bare majority, which would frustrate Biden’s agenda and provide subpoena powers allowing Republicans to investigate Biden. The fate of the Senate rests with unsettled races in Arizona, Georgia and Nevada.

Democrats vastly outperformed expectations and prevented a “red wave” that was anticipated due to economic woes including the highest sustained inflation since the early 1980s, rising violent crime and record-high illegal immigration.

Biden looking out into the crowd at the celebration event.
AP Photo/Andrew Harnik

Biden waving as he leaves the stage at the Howard Theatre.
AP Photo/Andrew Harnik

Biden sought to make the election a referendum on his predecessor Donald Trump — repeatedly warning that “democracy” itself was at stake — and warned that abortion could be the first of many rescinded personal rights, at one point even claiming that schools may segregate gay students.

“You did it, Joe!” Harris said, before saying that the results indicated “democracy” was still in effect — after Biden critics slammed his framing of democracy as requiring Democrats be elected over Trump allies.

“It is clear your work sent a message to the entire world: Our democracy is intact. And when democracy is intact, this is what it looks like,” Harris said. “Here’s the thing: some Democrats won and some Republicans won. That is what happens when more than 100 million Americans participate and vote in free and fair and open elections.”