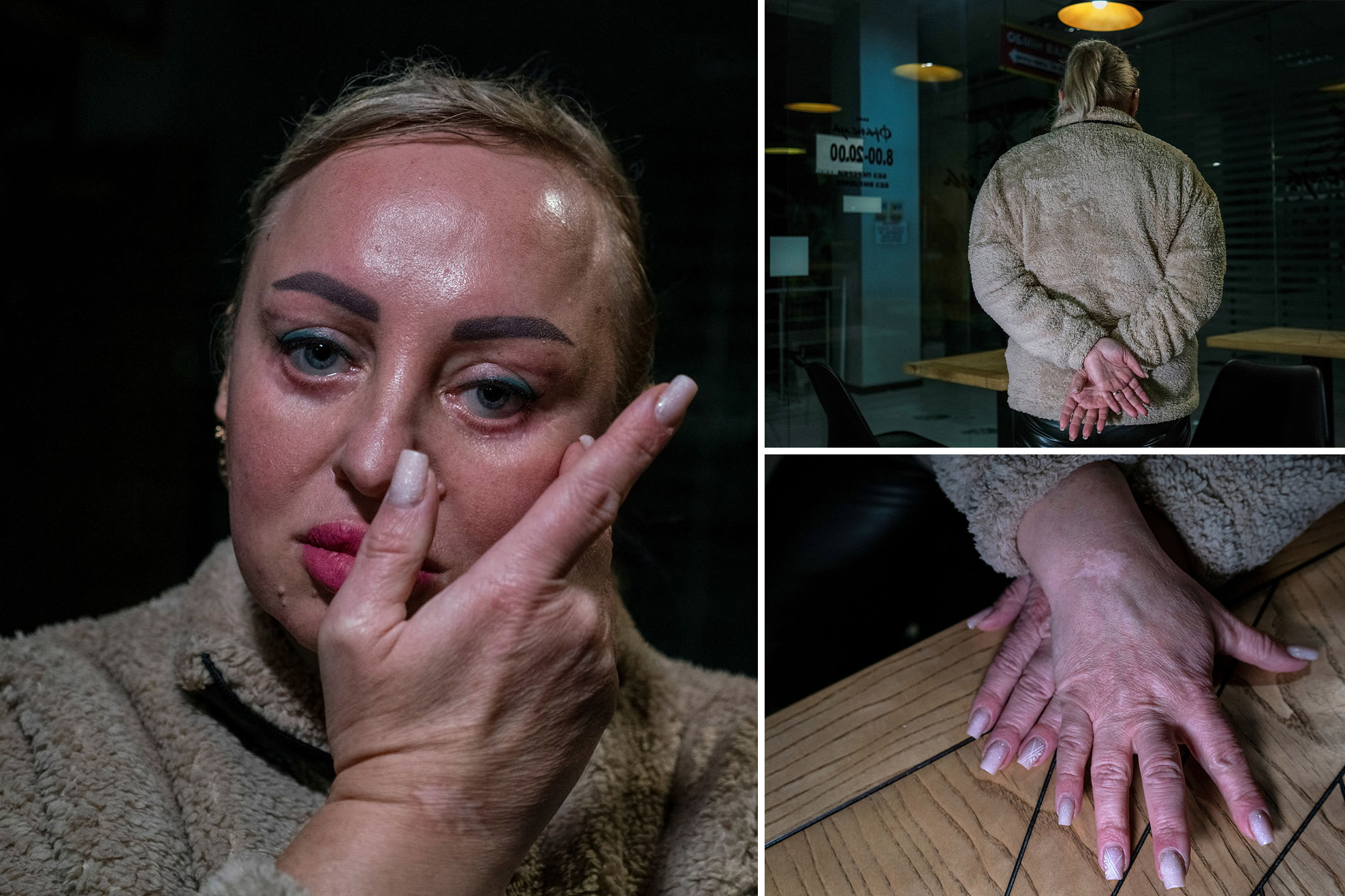 A Ukrainian widow living in the battle-scarred city of Kherson said she has come to resemble “a living corpse” after having her hands boiled and nails pulled out during hours of torture — and being subjected to a mock execution at her husband’s grave by Russian soldiers.

The tale of Oksana Minenko’s torment and survival has emerged as part of a gut-wrenching expose published by Reuters, revealing gruesome details about the alleged treatment of Ukrainians living in Kherson during the city’s nine-month Russian occupation.

Minenko, a 44-year-old accountant whose husband died defending Kherson’s Antonivskyi bridge on the first day of full-scale war, said she was repeatedly detained and tortured by Russian troops.

During several interrogations in the spring, she claimed that Russians plunged her hands in boiling water, pulled out her fingernails and beat her in the face with rifle butts so badly she needed plastic surgery.

Oksana Minenko, 44-year-old, who says she was repeatedly detained and tortured by occupying Russian forces, shows the scars on her face after having to undergo plastic surgery.REUTERS

Minenko, whose husband was a soldier who was killed in the war, said Russian forces plunged her hands in boiling water. REUTERS

Minenko, speaking in Kherson, said she was forced to kneel by her husband’s grave as Russian soldiers fired guns next to her. REUTERS

“One pain grew into another,” said Minenko, speaking at a makeshift humanitarian aid center, with scars visible around her eyes from what she said was an operation to repair the damage. “I was a living corpse.”

Minenko believes her tormentors targeted her because her husband had been a soldier. During his burial a week after his death, Russian forces turned up at the cemetery and made Minenko kneel next to his grave, firing their automatic weapons in mock execution, she said.

According to Minenko, on three occasions in March and April, men in Russian military uniforms with their faces covered by balaclavas came to her home at night, interrogated her and took her into detention.

On one occasion, the men forced her to undress and then beat her while her hands were tied to the chair and her head was covered.

“When you have a bag on your head and you’re being beaten, there is such a vacuum, you cannot breathe, you cannot do anything, you cannot defend yourself,” Minenko said.

Olha, 26, said she was beaten, given electric shocks and subjected to forced nudity.REUTERS

Local resident Vitalii Serdiuk, 65, shows his finger which he says was broken during torture by Russian service members.REUTERS

Russian troops captured Kherson last March and retreated in November after being unable to hold onto the territory under relentless attacks by Kyiv’s forces.

More than a dozen alleged victims claimed to have been beaten, suffocated, had their genitals and ears electrocuted, deprived of food and water, and jailed in crowded rooms with no sanitation for up to two months in some cases.

“This was done systematically, exhaustingly” to obtain information about the Ukrainian military and suspected collaborators or to punish those critical of the occupation, according to Andriy Kovalenko, the Kherson region’s chief war crimes prosecutor.

Those allegations have been backed by Ukrainian law enforcement and international prosecutors assisting Ukraine. But Moscow has consistently denied committing war crimes or targeting civilians during what it calls its “special military operation,” now in its 11th month.

A 35-year-old Kherson resident named Andriy said that during a five-day detention in August, Russian forces beat him, made him undress and administered electric shocks to his genitals and ears. When the current hits “it’s like a ball flying into your head and you pass out,” said the man, who declined to give his last name for fear of reprisals.

Aliona Lapchuk, a 55-year-old Ukrainian woman, said her husband Vitaliy was tortured and left to die by Russian forces in Kherson at the beginning of the war.REUTERS

Andrii, 35, shows how he was subjected to electric shocks to his ears by Russians, who he said also electrocuted his genitals. REUTERS

He said his captors interrogated him about Ukraine’s military efforts, including the storage of weapons and explosives, because they suspected him of having links to the resistance movement.

Ukrainian authorities claimed that a lot of the torture in Kherson was taking place inside a city office building that had been converted into a sprawling detention facility.

They said more than 30 people are known to have been held in just one of the rooms in the warren-like basement that was used for detention and torture during the Russian occupation.

Electric cables are seen in a cell at a preliminary detention center, where Russians allegedly jailed and tortured Ukrainians. REUTERS

During a December visit to the building’s basement, the smell of human excrement filled the air, bricked-up windows blocked the light and lying visible were signs of what Ukrainian authorities say were tools of torture by Russian forces such as metal pipes, plastic ties and a wire hanging from the ceiling allegedly used to administer electric shocks.

Scratched on the wall were notches, which authorities said were made by detainees possibly to count the number of days held, as well as messages. One read: “For Her I Live.”

Another location in the city where people were allegedly interrogated and tortured was a police building that locals have referred to as “the hole,” according to Ukrainian authorities and more than half a dozen Kherson residents interviewed by Reuters.

Liudmyla Shumkova, 47, said she and her 53-year old sister were held captive at the site for most of the more than fifty days they spent in detention this summer. She said the Russians asked them about her sister’s son because they believed he was involved in the resistance movement.

A Gay Pride flag is seen under a rubber mat at an entrance to a basement of an office building in Kherson, where where prosecutors say 30 people were held for two months.REUTERS

Shumkova, who works as a lawyer, said about half a dozen people packed into a cell with just a small window for light and as little food as one meal a day. She recounted hearing male detainees screaming in agony during torture sessions.

“They screamed, it was constant, every day. It could last for two or the hours,” she said.

According to the most comprehensive figures to date on the scale of alleged torture and detentions, shared by Ukraine’s top war crimes prosecutor, Yuriy Belousov, the country’s authorities have opened pre-trial investigations involving more than 1,000 people in the Kherson region who were allegedly abducted and illegally detained by Russian occupiers.

Belousov said authorities have identified 10 sites in the Kherson region used by Russian forces for unlawful detentions. Around 200 people who were allegedly tortured or physically assaulted while held at those sites and about another 400 people were illegally held there, he said.

Human excrements are seen inside a basement of an office building where people were allegedly detained and tortured.
REUTERS

Plastic ties for torture and a broken chair are seen inside the office building in Kherson.
REUTERS

A bucket filled with human feces is seen at the makeshift detention center, where people were held in cramped rooms without sanitation.
REUTERS

A burnt bed is seen in a cell at a preliminary detention center in Kherson.
REUTERS

Of more than 50,000 reports of war crimes that have been registered with Ukrainian authorities, Belousov said more than 7,700 have come from the Kherson region. More than 540 civilians remain missing from the region, he added.

Belousov, the war crimes chief, said more than 70 people had been identified as suspected perpetrators of torture and 30 people had been indicted. Most of them are low-ranking servicemen, he said, but some were senior officers, including colonels and lieutenant colonels.

The International Criminal Court in The Hague has opened an investigation into alleged war crimes in Ukraine.