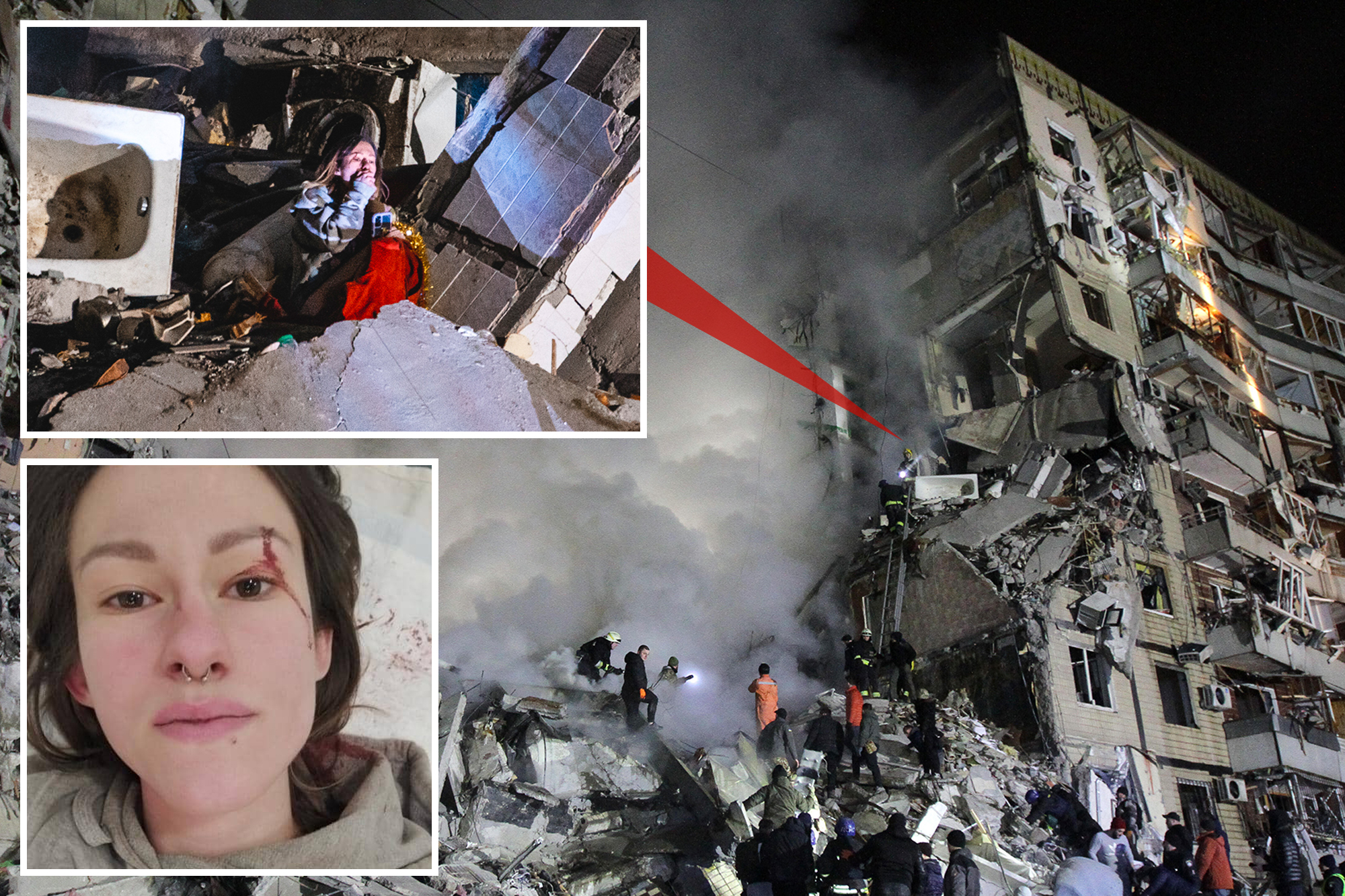 A survivor of Russia’s ruthless strike of a residential building in Ukraine was seen being pulled from the rubble after an attack that reportedly left her speechless.

The harrowing scene played out hours after a missile hit the apartment building in the city of Dnipro. The death toll there has grown to at least 30 — with another 30 to 40 people that could still be trapped under the debris, regional governor’s advisor Natalia Babachenko said.

First responders were seen carrying a lightly-dressed woman to safety more than 18 hours after the attack. They used a ladder to help reach her before she was eventually carried from the building on a stretcher.

The stunned woman can be seen in photos crouching down alone in shock and distraught — tightly holding onto a green stuffed animal and a string of gold decorations where her apartment used to be.

The harrowing scene played out after a Russian missile hit the building. Arsen Dzodzaev/hromadske

She’s been identified as 23-year-old Anastasia Shvets by multiple outlets. She was reportedly with her parents when the missile struck.

She shared her distressing story of survival on Instagram, according to the Telegraph.

“I don’t know where my parents are,” she said, according to the news outlet. “I remember my father’s stupid jokes today, how we took pictures of puppies with my mother today. We were eating mum’s noodles.”

At least 30 people were confirmed dead so far. Myakshykov Mykola/Ukrinform/Abac

From her hospital bed following the attack, the woman showed cuts across her tattooed legs.

“I have no words, I have no emotions, I feel nothing but a great emptiness inside,” she said, according to The Telegraph.

Earlier in the war, she said she lost her partner to the fighting, according to the Telegraph. Russian President Vladimir Putin’s invasion of the neighboring country is almost a year old.

Emergency workers were able to reach her hours after the destruction. Arsen Dzodzaev/hromadske

“I still can’t get over that it’s been two weeks since I heard your voice and saw your smile,” she reportedly wrote to her partner months ago. “You told me how much you loved me but then everything ended, all our dreams and goals.”

The latest attack on the apartment block was the largest carried out by Russian forces in the past several weeks that zeroed in on Ukraine’s power infrastructure and urban areas.

Emergency workers said they had heard people screaming for help underneath piles of rubble — and were using moments of silence to help find survivors amid freezing cold conditions.

Still, officials are bracing for the worse.

“The chances of saving people now are minimal,” Dnipro’s Mayor Borys Filatov told Reuters. “I think the number of dead will be in the dozens.”

Ukraine’s Air Force said the apartment building was hit by a Russian Kh-22 missile, which are known to be inaccurate. The under-siege country said it lacks the air defense system to shoot down the Soviet-era missile developed during the Cold War to bomb warships.